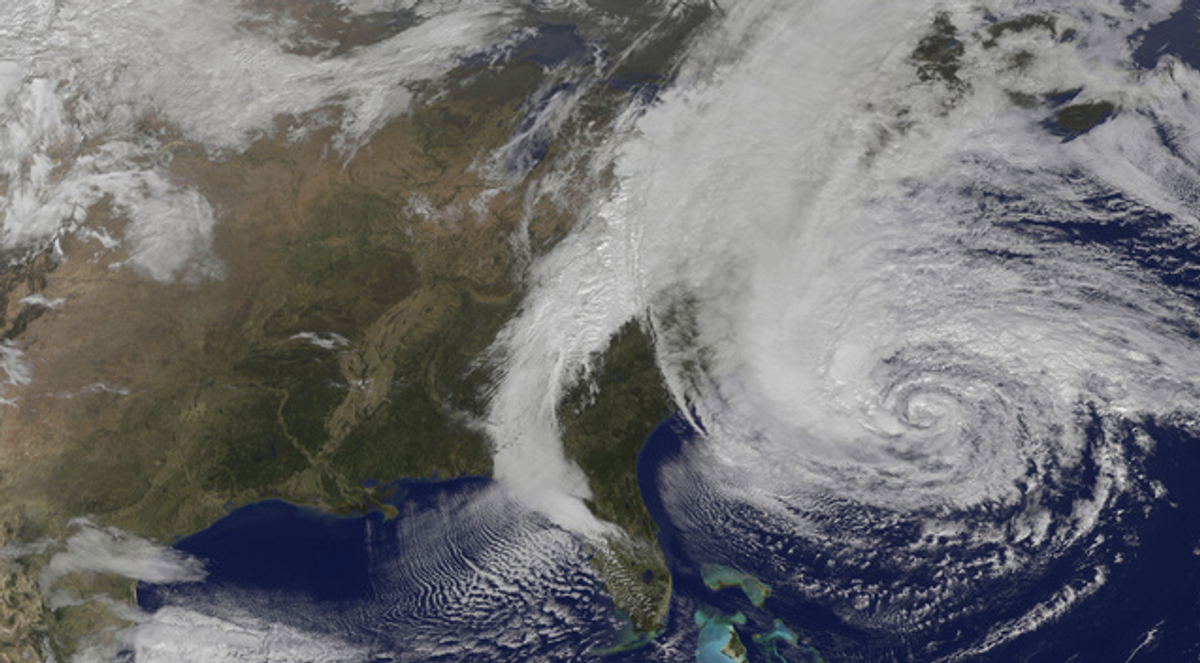 In case you are unaware about the havoc Hurricane Sandy will unleash upon the East Coast, the Weather Channel's Stu Ostro, who is "not prone to hyperbole,"  has attempted to put it in perspective:

History is being written as an extreme weather event continues to unfold, one which will occupy a place in the annals of weather history as one of the most extraordinary to have affected the United States.

In all capital letters, he continues:

- REGARDLESS OF WHAT THE OFFICIAL DESIGNATION IS NOW OR AT/AFTER LANDFALL -- HURRICANE (INCLUDING IF "ONLY" A CATEGORY ONE), TROPICAL STORM, POST-TROPICAL, EXTRATROPICAL, WHATEVER -- OR WHAT TYPE OF WARNINGS ARE ISSUED BY THE NATIONAL WEATHER SERVICE AND NATIONAL HURRICANE CENTER -- PEOPLE IN THE PATH OF THIS STORM NEED TO HEED THE THREAT IT POSES WITH UTMOST URGENCY.

- TAKE COASTAL FLOODING EVACUATION ORDERS SERIOUSLY; PREPARE FOR DOWNED TREES AND STRUCTURAL DAMAGE BY OBSERVING TORNADO SAFETY GUIDELINES, I.E. STAYING INSIDE AND GETTING INTO THE LOWEST, MOST-INTERIOR PORTION OF THE BUILDING OR ANOTHER DESIGNATED SAFE PLACE; BE KEENLY AWARE OF YOUR LOCATION'S SUSCEPTIBILITY TO FLASH FLOODING (URBAN AND SMALL STREAM) FROM RAINFALL AND RIVER RISES; KNOW THAT YOU COULD BE WITHOUT POWER FOR A LONG TIME BUT ALSO UNDERSTAND THE DANGERS OF CARBON MONOXIDE POISONING FROM IMPROPER USE OF GENERATORS.

Ostro describes why the storm is so "mind-boggling" to meteorologists:

A meteorologically mind-boggling combination of ingredients is coming together: one of the largest expanses of tropical storm (gale) force winds on record with a tropical or subtropical cyclone in the Atlantic or for that matter anywhere else in the world; a track of the center making a sharp left turn in direction of movement toward New Jersey in a way that is unprecedented in the historical database, as it gets blocked from moving out to sea by a pattern that includes an exceptionally strong ridge of high pressure aloft near Greenland; a "warm-core" tropical cyclone embedded within a larger, nor'easter-like circulation; and eventually tropical moisture and arctic air combining to produce heavy snow in interior high elevations. This is an extraordinary situation, and I am not prone to hyperbole.