A hurricane of panic: The Sandy pre-show to the pre-show

The news won't get interesting until Sandy finally hits. But try telling that to CNN and the Weather Channel 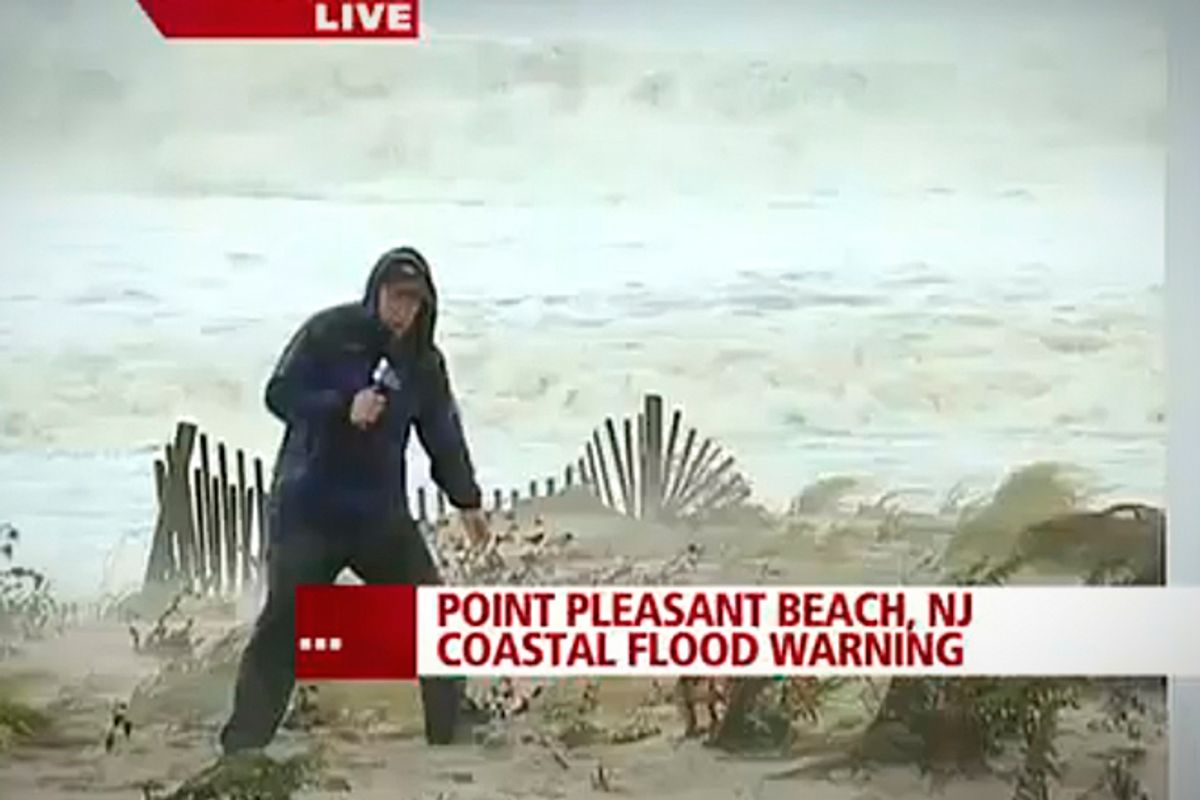 When I turned off the television at around 11:30 last night, CNN was finishing up an interview with a Cape Cod resident named Joni, who had recorded a video of some waves from earlier in the day. Not huge waves, but waves a little angrier, slightly bigger, a smidge grayer than typical waves. Thunderstorm waves. Joni was questioned about these waves for five minutes. This segment encapsulated television’s hurry-up-and-wait predicament with respect to Sandy: There is a lot of airtime to fill, and not a lot happening yet.

The Weather Channel and the news channels have been talking about Sandy for days. The states and major cities in the hurricane’s predicted path took precautions and had their press conference well in advance of the storm’s arrival, later this afternoon. So news anchors in the newsroom have been repeating the same items — how the storm has affected Obama's and Romney’s campaign schedules, Obama’s FEMA press conference, Bloomberg's and Christie’s press conferences, photos of destocked water shelves, talk about airport cancellations, promises of how awful everything is going to get — while cutting to on-site reporters standing next to New York Harbor in not-so-alarming weather. (At least they’re getting rained on now.) It’s the weather equivalent of the pre-show to the pre-show.

This morning, I turned on the Weather Channel to hear a calm, automated voice announcing the local weather — “55 degrees with light rain” — over elevator music and glorified screen-savers. Meanwhile Al Roker, also for the Weather Channel, had at least done his job: Unlike all the reporters around New York Harbor, he and his yellow slicker were getting seriously blown around on the beach at Point Pleasant. There will be more of that, but until then, I’m going to keep a running list of some of the more absurd ways our TV news outlets are using up the time before things get serious. I'm especially eagerly awaiting the return of the Weather Channel's "Breaking Weather System" rubric, which they abbreviate to "BreWS," because I'm hoping some savvy rep at Anheuser-Busch took the bait, and decided to sponsor it. (It sure would be a welcome counterpoint to those heart-tugging State Farm commercials, the storm equivalent to those Sarah McLachlan ASPCA ads.)

9:00 a.m.: Dude on the "Today" show tells people to poop on kitty litter if they lose power.

9:56 a.m.: Weather Channel, NBC, CNN should take note from NY1 on how to add drama to live reports: Mic your correspondents terribly so all you can hear is the scary, scary wind. Sorry, Rockaways councilman!

10:10 a.m.: The morning high tide has flooded parts of New York City, but you wouldn’t know it from any of the news channels, which are only showing floods if they're on the coast in New Jersey.

10:12 a.m.: Two Weather Channel correspondents get into a conversation of what they’re wearing! One is wearing "what a surfer would wear," which is a wet suit under her blue jacket, the other says he is a "big rubber seal" underneath his Charlie Brown yellow jacket. They banter about the cost of wet suits — "I don’t think I've ever bought anything that expensive for a birthday present” — and the name of his hotel.

10:40 a.m.: How to describe the music the Weather Channel keeps playing?  I hear ersatz U2 and something that starts like  “Hotel California” and then gets much lamer than you could possibly imagine.

10:44 a.m: Weather Channel news is the best, by far, thanks to the duo who previously discussed their outfits. They appear to be in some sort of romantic comedy. She just teased him about his use of the word  "de-couple.”