Bill McKibben does the Sandy math

Another reason there's no action on climate change? Congress is in bed with the fossil fuel industry 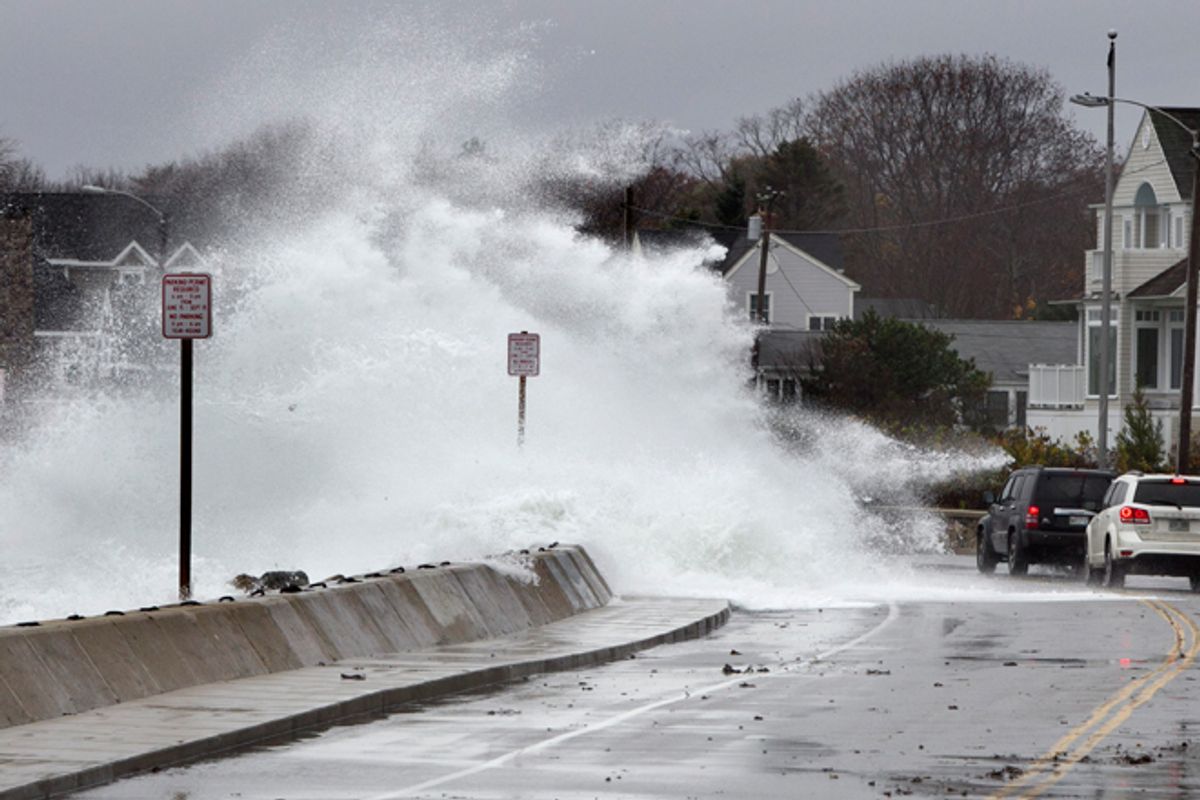 As a writer and activist Bill McKibben has devoted his life to tackling the threat posed by man-made climate change. As Hurricane Sandy brought normal life on the East Coast to a standstill, McKibben's Twitter feed went into overdrive -- a veritable deluge of storm updates and political commentary. A few moments ago, he took some time out of a very busy day to explain why climate change hasn't been a bigger issue in the run-up to the ongoing catastrophe:

The candidates refused to talk about climate change during the debates and the mainstream media hardly dares mention global warming in the context of this storm. What's going on here?

What's going on here is the astonishing power of the fossil fuel industry. They have essentially bought one party and scared the other. And they've done the same thing all over the world. They're the richest, most powerful industry on earth and they are able to keep people from questioning what's become the most dangerous set of corporate practices in history.

These are guys who, faced with a melting Arctic, decide to go drill in it for yet more oil. Faced with the warmest year in American history, 2012, they proudly announce how much more they're spending to explore for more hydrocarbons. And that's because they're making absolutely record profits. And until we can rein them in a little bit, the chance of any impact in Washington is, I think, very slim. We've spent 20 years appealing to politicians, but I think it's becoming clear that Congress acts as the customer service arm of the fossil fuel industry and they've basically had the rest of us on hold for two decades.

But the fossil fuel industry has always been fighting against the notion that we should do anything about global warming. What's so confusing right now is that even during the warmest year on record we're talking about it less and less.

Oh, they're fighting it harder than they've ever fought. Chevron just gave the largest post-Citizens United corporate donation, corporate political donation, last week. The Koch brothers are almost certainly spending much more than any other individuals or any other group on this race. It's intense out there.

Do you think something as huge and unprecedented as Hurricane Sandy can change that dynamic?

I don't think it can change it overnight. I think if you're asking will Mitt Romney turn into a different guy, well, no. He stood up at the Republican National Convention and mocked the idea of slowing the rise of the oceans. That's a piece of mockery that looks a little less hysterical today with the entire East Coast of the United States worrying about the rise of the oceans.

These guys have ignored the epic drought, the hottest month in American history and the melt of the Arctic. At some level they seem to be kind of weatherproofed.

I was just looking at the New York Times Live Update page: There are stories about how the hurricane is going to affect polling, how it might affect turnout, stories about dogs upset because they can't get into Central Park -- but not a word on climate change.

Climate change has never been the media's finest hour, it must be said. And that continues. But we've been successful in building something of a movement without much help from the mainstream media. And occasionally we've been able to do some things, like at least temporarily blocking the Keystone pipeline and things like that. The night after the election we're launching a 20-city road show: "Do the Math" -- http://math.350.org -- it's based on this piece I wrote for Rolling Stone this summer that went very oddly viral, just describing the way that the fossil fuel industry has five times as much carbon in its reserves as even the most conservative government thinks would be safe to burn. How it's become a kind of rogue, outlaw industry.

We're going to do our best to take them on directly. Whether we can or not, I suppose you can probably bet against us -- but we'll give it a try. We'll try to get a divestment movement going on college campuses and so on.

Do you ever get pushback for what you're doing right now -- making your points about climate change during the middle of a tragedy?

We've been raising money as fast we can at 350.org for relief efforts. The main point of the day is to just get word out so that everybody knows what's going on and where not to be, and what not to be doing.

Where are you now?

I happily made it home to Vermont for the first time in many, many weeks. I'm home in Vermont, which is where I wanted to be, because of course last year, the last time we had one of these big, huge Atlantic hurricanes, the former record holder, it smashed right into Vermont. I think this time we are going to get high winds, and we'll almost certainly lose power, but I don't think we are going to have flooding like we did from Irene.

Are you feeling any winds now?

It's starting to pick up. It's funny, the sky was blue a little while ago, but now you can hear the wind singing in the trees, which is kind of eerie.

In regard to that comment about Romney mocking Obama -- isn't one of the points underlying his mockery the notion that it's ridiculous to think that anybody could actually stop the rise of the oceans?

One can't reverse global warming. But we've raised the temperature one degree -- that's locked in. And the trouble is if we keep pursuing, well, the policies of Obama, but especially the policies of Romney, all the scientists are clear that that one degree will turn into four or five degrees. At which point we'll just be doing emergency response around the clock. We'll be fighting forest fires in places we can't imagine.

And even if we somehow managed to get climate legislation in place in the next few years, it would still be bad.