After Obama's 2008 victory, the state GOP cut the early voting window by half. But Democrats say they'll win anyway 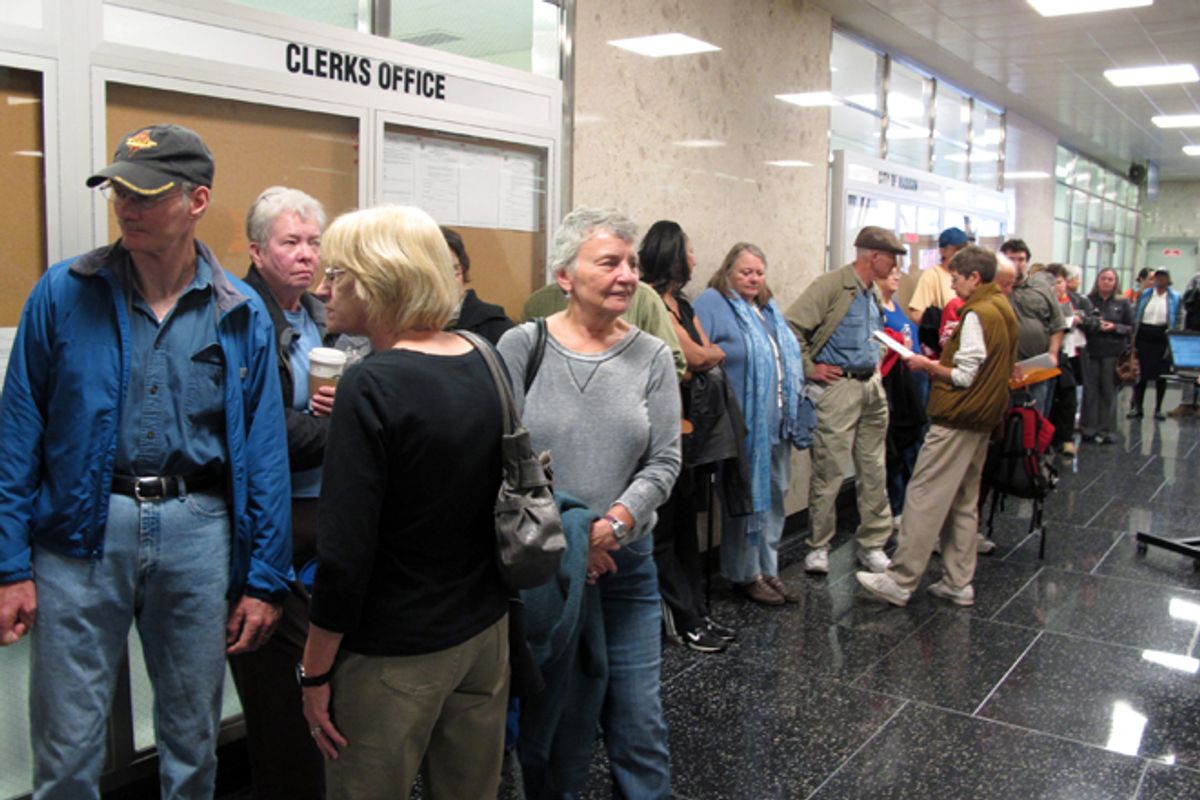 After Barack Obama won Wisconsin by 14 points in 2008, state Republicans fought back, using voter access laws to thwart the Obama coalition. One in five Wisconsin voters cast ballots early four years ago, as polls opened a month before Election Day. Last year Republicans in the state Legislature changed that. Now there are only two weeks of early voting, and instead of going through the Monday before the election (including the weekend), it shuts down Friday Nov. 2.

That left only one weekend for Wisconsin Democrats to get out their voters on a Saturday and Sunday, when people are more likely to have time off from work. At a "Souls to the Polls" rally in Milwaukee on Sunday, Denver Mayor Michael Hancock shook up some Democrats by declaring, “If the election was held today, President Barack Obama would lose the state of Wisconsin because where his base is, we have not turned out the vote early. The suburbs and rural parts of Wisconsin – the Republican base – are voting. President Obama’s base has yet to go vote. We've got to get our people to go vote."

The Obama campaign's Wisconsin press secretary, Gillian Morris, quickly corrected Hancock after the rally. "I would not say that," she told me, insisting early voting in Democratic districts is strong, though she acknowledged the party may not have the overwhelming early-voting edge it enjoys in most other states. Later Morris emailed to elaborate: “Since the first day of early voting we’ve seen a huge turnout in early voting among supporters of President Obama."

"The numbers we are seeing do not back up [Hancock's] assessment that our base is not turning out,” Joe Zepecki, a spokesman for Obama’s campaign in Wisconsin, told the conservative Washington Examiner, which tried to make a story out of Hancock's remarks.

Still, there's some evidence that the recent recall election boosted the Republican ground game, including its early-voting machine. National conservatives have made hay with the fact that on Day One of early voting, Oct. 22, turnout was higher in Republican leaning Waukesha County than in the Democratic stronghold of Dane County, anchored by liberal Madison. Wisconsin was notably absent from the list of early-voting successes touted by Obama for America field director Jeremy Bird in a memo on how the early vote is boosting the president distributed Monday morning.

In Ohio, precincts Obama won in 2008 have cast 53 percent of the vote to 47 percent from GOP precincts, and the Democrats' early voting lead is much higher than it was at this point in 2008. And in two days of early voting in Florida, Democrats have already wiped out the traditional GOP vote-by-mail edge. On a conference call Monday Obama advisers Jim Messina and David Axelrod credited the president's 2-to-1 early voting lead in Iowa and Nevada and strong edge in Ohio for his swing state strength, but didn't talk about Wisconsin early voting, either. The fact that Wisconsin voters don't have to declare themselves members of either party also helps thwart projections of how early voting is going here.

At Sunday's "Souls to the Polls" rally Milwaukee Mayor Tom Barrett acknowledged that "both parties have a strong organization now," at least partly as a result of the June recall election, which he lost to Gov. Scott Walker. But Barrett attributed Walker's win to "people who were just philosophically opposed to the recall," and says his race helped Democrats build a stronger party infrastructure. Fully a half million people who voted in 2008 didn't vote in the recall. Still, Barrett said one goal of "Souls to the Polls" was countering an enthusiasm dip for the president. "Four years ago, excitement here was off the charts. Now it's not as high."

Milwaukee Rep. Gwen Moore spoke directly to the enthusiasm gap at the "Souls to the Polls" rally, urging the activists in the audience to motivate "undecided" voters in their community. Not the usual "undecideds" who are torn between Obama and Romney, but parts of the Obama coalition who are undecided about whether to vote at all.

"Some people are devastated and discouraged," the African-American congresswoman admitted. "They are rightfully angry that things haven't turned around. But some voters have Romnesia," Moore said, noting they'd forgotten all the people who'd died for the right to vote. Early voting gives activists more time to make their case to the discouraged, she said, and get them to the polls. "I like the thrill of Election Day, getting to the polls just before they close at 7:59," Moore told the rally. "But something might happen. Get out there and vote early."

Outside of Wisconsin, for now, something is indeed happening – Hurricane Sandy. There's no way to know how the storm will change the election, but an early-vote edge is a hedge against chaos that lasts through Election Day. Though it's not in the hurricane's path, Sandy already had an impact in Wisconsin: both Obama and Romney canceled campaign stops here scheduled for Monday and Tuesday.

Moore's speech had an impact on Sunday: rally-goers streamed across the street to City Hall to vote early, while others knocked on nearby doors to bring friends and relatives to the polls. Lines to get ballots and then to cast them streamed down corridors and around the corner; for the hour that I stayed there, every voting booth was full. Families came with small children in tow, many of them still dressed for church. It was the Obama coalition in microcosm – mostly younger whites, women and African-Americans.

Jennifer Price, 34, braved the long lines with her husband. "I wanted to make sure nothing stands in my way," she says. They left their children, ages 3 and 7 months, with her mother, who's voting early, too, Price said.

"The numbers are going up today, we've been very busy, before church and after church," said Milwaukee voting inspector Victoria Robinson, who thought Sunday had been the site's busiest early-voting day yet. Yet it's hard not to imagine that cutting the time for early voting by half hurts Democrats in Wisconsin.

Still, Gillian Morris said, "From students sleeping out overnight outside early vote locations to be the first to cast their ballots for President Obama in Wisconsin to the hundreds of volunteers and supporters that have joined us at early vote rallies from Superior to Beloit, we feel very strong about our support among early voters."

A personal note: I'm in Milwaukee at Boswell Book Co. Monday night at 7 p.m., talking about my book.