A minister uncovers the link between homosexuality and extreme weather 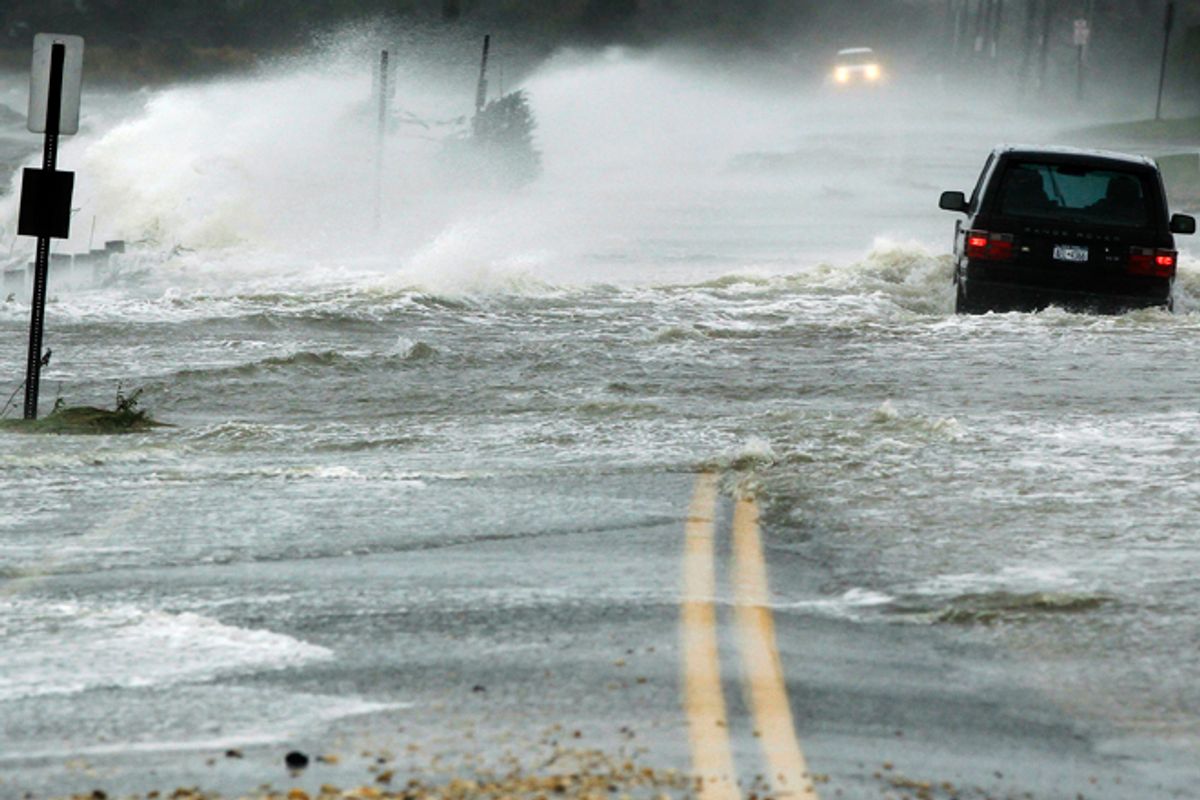 Just as surely as a big storm will bring about destruction, mayhem, frantic pillaging of Trader Joe's outposts and breathless, overwrought news coverage, it was only a matter of time before some genius determined what the real cause of Hurricane Sandy is: It's the gays.

In an "urgent call to prayer," founder of Defend and Proclaim the Faith Ministries and amateur "end times" Bible analyst John McTernan has proclaimed that "God is systematically destroying America" for our misdeeds. He'd like you to look at the record. "Just last August, Hurricane Isaac hit New Orleans seven years later, on the exact day of Hurricane Katrina," he writes ungrammatically. "Both hit during the week of the homosexual event called Southern Decadence in New Orleans!" Strangely, both also hit at the height of hurricane season. COINCIDENCE?

McTernan goes on to explain that "Obama is 100 percent behind the Muslim Brotherhood which has vowed to destroy Israel and take Jerusalem." But — and here's the shocking twist — "Both candidates are pro-homosexual and are behind the homosexual agenda." Clearly a vote for either Obama or Romney is a vote for a FRANKENGAYSTORM.

In a separate post about "Hurricane Sandy and the Election," McTernan expounds on his Romney as friend of the Gays Who Are Bringing About the Lord's Wrath theory, writing about "Romney being a Mormon and pro-homosexual. Yes, he is a big time pro-homosexual supporter to the point he will keep open homosexuality in the military; he wants homosexuals in the Boy Scouts; and he wants more open homosexuals in the Republican Party." Because if there's one thing Mitt Romney would like the American people to know, it's how much he respects gay people.

McTernan's blog is a real powerhouse of "I told you so" rhetoric, in which he brags that "I warned and warned of the danger of this election." It's also, should you happen to be holed up somewhere drinking cocoa right now while you await the kraken invasion, a fabulously lurid read. "This monster storm aimed at America and ready to inflict severe damage during election week is not a coincidence. Hurricane Sandy may flood Washington, DC on election day!" he writes. "It is like the hurricane is a huge bucket of vomit in America’s face during the election … What a sign from the holy God of Israel that American politics is an abomination to Him. A pro-homosexual Mormon along with a pro-abortion/homosexual, Muslim Brotherhood promoter Hard Left Fascist are running for president." This is a big problem because, as McTernan would like you to know, "The homosexual act is a very serious offense to God. It is linked with child sacrifice and bestiality." And floods! Floods of vomit!

It's amazing, isn't it, how these extreme right-wingers can find evidence of divine fury in an act of nature? And here I thought they'd want us to be happy about Sandy. After all, I was sure that when awful things happen, they're just God's way of giving us a special gift.