Are low ratings the new normal for network TV?

"Up All Night" is being overhauled — again. Why are networks suddenly cutting so much slack to low-rated shows? 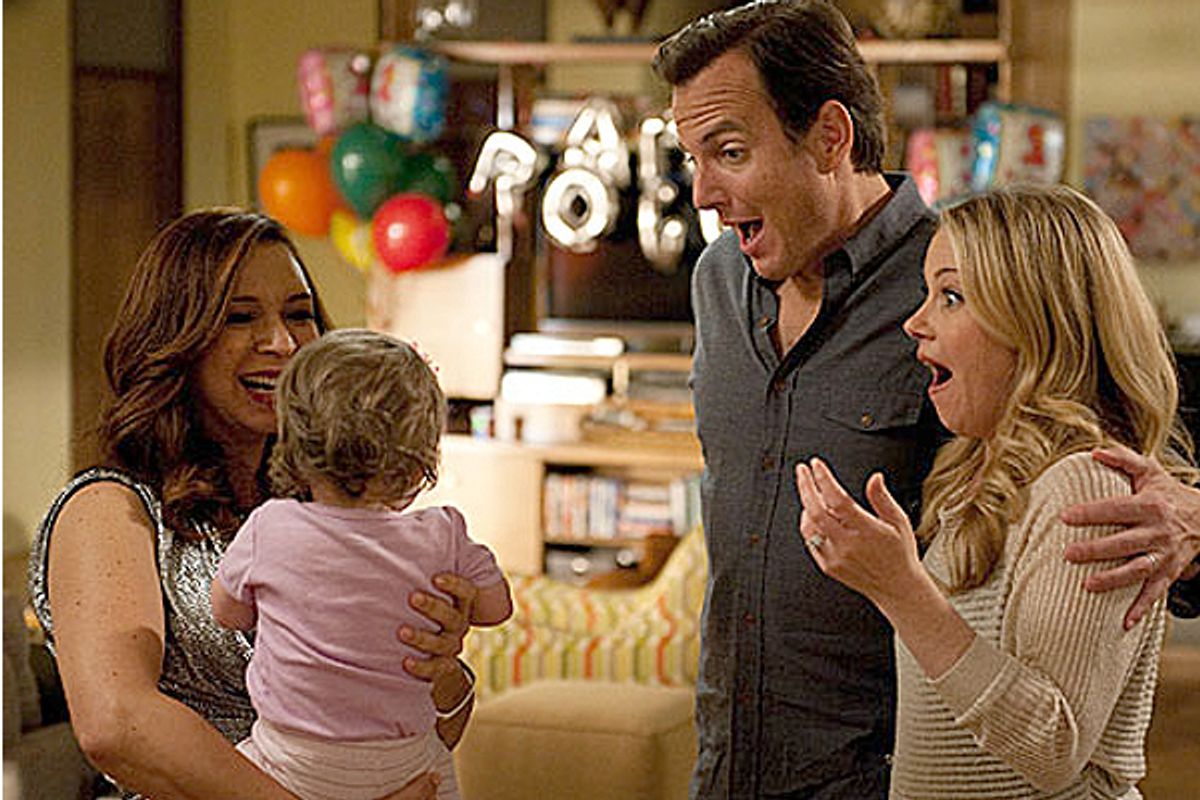 While the Northeast was dealing with Sandy, Los Angeles was going about its business: NBC announced yesterday that the Christina Applegate–Will Arnett–Maya Rudolph sitcom “Up All Night” will be overhauled for a second time (a third, if you count the original pilot that was sent to critics and industry people), taking a hiatus and then transforming itself into a multicamera sitcom that will be taped in front of a live studio audience. “Up All Night,” which is in the middle of its second season, has always had a great cast, but has never been as consistently good or widely watched as NBC must have hoped when it signed such a killer lineup. Why is NBC giving a series with pretty low ratings and even less buzz so much slack? What does a series have to do to get canceled these days? The new normal for ratings — low, very low — seems to be precipitating a new normal for patience.

“Up All Night” already rejiggered itself this year. Its first season focused on new parents Reagan and Chris (Applegate and Arnett), as Reagan balanced parenthood and her high-pressure job working for her bestie, the Oprah-esque Ava (Randolph). Going into Season 2 “Up All Night” dashed the workplace aspects of the show. The change didn’t boost “Up All Night’s” ratings or quality significantly. ("Up All Night" is a really interesting experiment in how much you can like a couple that dislikes everyone in the world but each other.) The show does OK for NBC: This year it averages around 4 million viewers, which is more than “30 Rock,” but less than “Parks and Recreation.” (A useful relative measuring stick: The biggest hit sitcom on TV, “Modern Family,” has around 13 million viewers. NBC operates on its own scale.) “Up All Night” also doesn’t have the sort of dedicated, Internet-savvy fan-base “30 Rock,” “Parks” or “Community” do: If it got canceled, I’m not sure an impassioned save-our-show letter-writing campaign would ensue.  Moreover, the coming makeover, so soon after the first one, suggests that even the people making “Up All Night” don’t think it’s hitting its marks creatively.

All told, “Up All Night” is a pretty low-rated, creatively troubled show that could be axed quietly — and instead it's going to stay on the schedule all year after undergoing a very public overhaul. Bob Greenblatt, who took over programming at NBC last year, has said he wanted to show patience for his series, but all over the networks, series that probably would have been canceled in years past are plugging on.

It’s almost November and just two shows — “Made in Jersey” and “Animal Practice” — have been outright canceled. And this isn’t because there has been a crazy plethora of huge smashes: NBC’s “Revolution” and “Go On” are the only new series that can really claim to be “hits.” At this time last year, “Charlie’s Angels,” ‘The Playboy Club,” “Free Agents” and “How to Be a Gentleman” had all been canceled. The year before “My Generation,” “Outlaw,” “Lone Star,” “Undercovers” and “The Whole Truth” were goners by November. That’s twice as many shows canceled early in the season in years past as in this one— and it’s not like “Chicago Fire” or “Ben and Kate” have been doing spectacularly well.

As lower ratings have become more commonplace, the networks are staying calmer when they see them. Why cancel a show if it’s got something going for it: a great cast, or buzz, or acclaim. Or even if it's just helping a network brand an evening? Why cancel a show that is bringing in a small but steady amount of eyeballs? Especially when there is no indication you’ll be able to program something else much stronger in its place.

I'm all for this: It’s an acceptance of the new ratings normal that’s kept shows like “Community” and “Happy Endings” (and "Whitney") on the air, has gotten “Ben and Kate” a near-full-season order, and is why I’m not too worried about “Nashville's” future, whatever its ratings. As for “Up All Night,” its decision to try something new — especially something as out of fashion as the multicamera format — has me more interested in it than I have been since its premiere.