What did we learn from the flooding of the greatest city on earth? Global warming will no longer be ignored 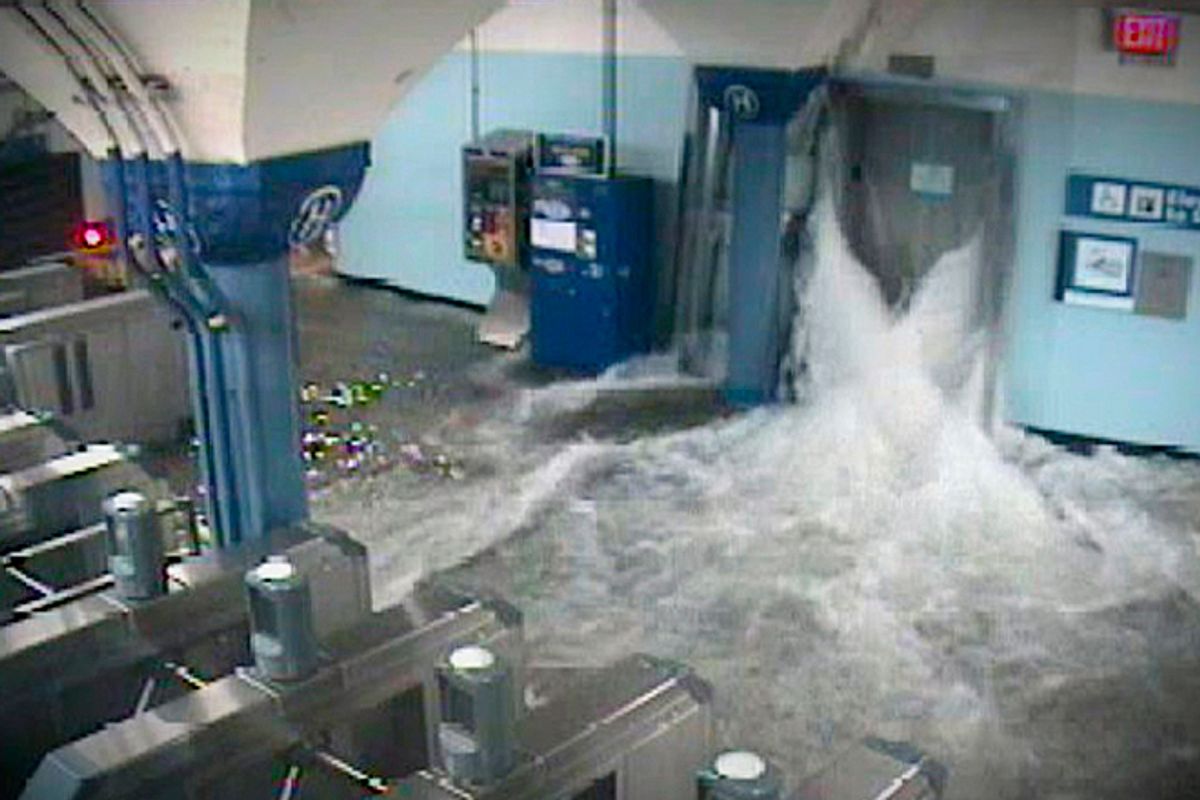 In this photo provided by the Port Authority of New York and New Jersey a surveillance camera captures the PATH station in Hoboken, N.J., as it is flooded shortly before 9:30 p.m. EDT on Monday, Oct. 29, 2012. (AP)
--

In the middle of Monday night's Eastern seaboard chaos -- the power transformers exploding in sheets of white light, the drowned carousels and vanishing boardwalks -- I saw a photograph posted on Facebook so arresting I tweeted it instantly without thinking.

The picture showed floodwaters pushing through the closed door of an elevator shaft into the Hoboken PATH station. The image captured the sheer terror and sense of helplessness provoked by rising floodwaters more succinctly than hours of cable TV footage of reporters standing in the rain or a thousand residents of Brooklyn wasting their iPhone batteries to inform us that they had just lost power. In a glance, the flooding station told us that Hurricane Sandy was punishing a major metropolitan area far worse than most of us had expected. We're used to seeing levees break. We're accustomed to pictures of families sitting on the roofs of their own homes, surrounded by water. But we've never seen a 108-year-old subway system confront its worst disaster, ever. That's new and deeply troubling.

And cleanup is going to be a bitch.

That picture went viral unlike anything I've ever passed along on any social media network. Even as they retweeted, most viewers expressed astonishment similar to mine -- the photograph looked more like a scene from a disaster movie than a snapshot of real life. The buzz was understandable. Anxiety about the full extent of Hurricane Sandy's devastation had been rising all night in tandem with the storm surge, and the PATH station photo crystallized the growing nervousness.

But some questioned its authenticity, and I began to feel misgivings. The day had been full of faked photographs turbo-injected into the national dialogue by tricksters and dupes. As a journalist, it was a serious dereliction of duty not to have done due diligence on the sourcing. Hundreds and hundreds of people had retweeted me! I prepared to eat some major crow.

And then the photograph turned out to be real.

Yes, it's all real, folks. This is no disaster movie. Iron Man and Captain America aren't lurking around the corner ready to save the day. And I'm not just talking about the reality of a very bad commute for weeks to come in the New York metropolitan area. That flooded PATH station packed such a visceral stomp not just because it told us what was happening in the moment, but because it signaled what's coming in the future. The water is rising. Greater catastrophes loom. Climate change is real. We saw it, in living color, on Monday night.

No one can say we weren't warned. Sure, even now, sober minds are telling us that it is disingenuous to tie any one weather disaster to man-made global warming. They can shut up now. Certainly, many factors combined together to create Sandy's hybrid super-storm. But the time is long past to stop beating around the bush. Global warming is raising the ocean's temperature. Warmer oceans provide the fuel for bigger, more intense storms. Global warming is raising the sea level. Storm surges will get worse, and every major metropolitan area near the coast -- any coast -- is under threat.

Hurricane Sandy's devastation must mark a turning point. Scientists have been telling us this for years, and with each passing month, their confidence in the dire prospects awaiting us has grown, bolstered by the observed reality around us.

But politicians, in contrast, have grown more timid. Whether that's because of lobbying by the fossil fuel industry, or global warming science falling victim to the ideological culture war, or merely a bid to get votes in southern Ohio coal mining country, is irrelevant. Every elected official in the United States needs to pay attention to what happened in New York and New Jersey Monday night and start taking responsibility. And those who have mocked the goal of slowing down the rise of the oceans should feel a deep sense of shame.

And out of that shame, perhaps we can see some cause for optimism. We must ensure that Hurricane Sandy signals something more than just an on-ramp to an era of routine, annual "storms of the century." We must declare that the flooding of the greatest city in the world is the final reality check. Sure, flooding the media capital of the universe is always going to result in coverage that dwarfs what happens when disaster hits anywhere else. And that's unfair to drought victims in Texas and the displaced residents of New Orleans and the vulnerable millions in Bangladesh. But if we want change maybe that's what we needed to have happen. We need to have Wall Street freaking out at the sight of water flowing through the streets of the financial district. We need to see the Gowanus canal -- one of the most polluted bodies of water on the planet -- overflowing its banks. We need to see the lights go out in Lower Manhattan.

That image of water forcing its way through the closed elevator doors is scary because when we stare at it we know we can't do anything to plug the leak -- and the water is just starting to flow. But we can do something about climate change. We can stop electing politicians who call global warming a hoax. We can tax the production of greenhouse gases so that investment flows toward renewable energy. We can boost infrastructure spending to protect our most vulnerable areas. And we don't need any more warnings. We just have to look at the pictures.