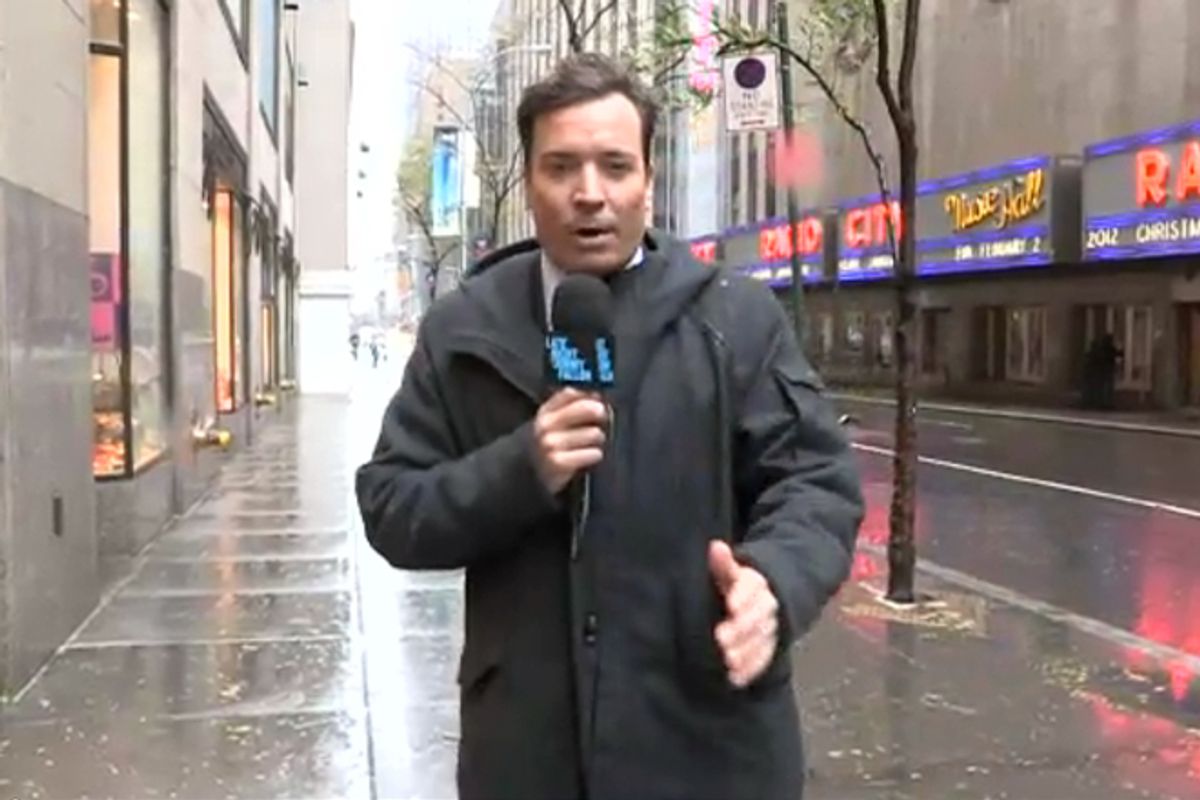 The show goes on. In what will no doubt go down among the most memorable episodes of either of the late night host's careers, both David Letterman and Jimmy Fallon taped very unusual shows Monday afternoon in the midst of Hurricane Sandy–besieged New York City.

Although Jon Stewart and Stephen Colbert, as well as Jimmy Kimmel — who'd been set to do a week of shows from Brooklyn — had to cancel their programs and have yet to announce when they'll resume, the competing, indefatigable midtowners Letterman and Fallon plunged on and did their scheduled shows, albeit without audiences.

On CBS, a rain-slickered Letterman and his band leader Paul Shaffer opened the show outside the Ed Sullivan Theater, declaring they were going to "go for it" — as soon as they found the keys to the building — before segueing into a montage of brutal storm footage. And then, as Dave ran out to deliver his monologue, the camera panned to 500 empty, silent seats.

The elder statesman of late night, who explained he didn't want to do anything that "would put people in jeopardy,” regaled the tiny group of musicians and technical staff with a disaster themed Top Ten list, and cracked that he'd listened on the radio for the talk show closings but was out of luck. An "I Know What You Did Last Summer"–attired guest Denzel Washington looked exhilarated, made a dramatic entrance and said he'd swum all the way to the studio.

Over on NBC, Jimmy Fallon, similarly opened his show on the already soggy street before welcoming Seth Meyers, Padma Lakshmi and "Flight" director Robert Zemeckis. Unlike Letterman, though, Fallon didn't exactly play to an empty room – in a deeply Fallon-esque routine, he performed for a solitary, stream of consciousness heckling weirdo in a Mets cap.

In their strangely stark yet giddy ways, Letterman's and Fallon's shows recalled the tense, grief-stricken days after 9/11, when making jokes again seemed like both the unlikeliest thing in the world and somehow also the most dearly needed. Yet it also brought to mind the plucky, improvisational days of the 2008 writers' strike, the tightrope dance of excruciating tension and the surreal break from everyday routine.

"Imagine laughter. Imagine fun. Imagine excitement," Fallon implored the home audience Monday night. For many — especially those of us in the waterlogged Big Apple — we didn't have to imagine it. Excitement, for want of a better word, was howling right at the window. And all we could do was howl back. Howl for a little while not in fear and despair but in gratitude for a city's indomitable tenacity. Howl, for a bit in the middle of a dark night, in laughter.