Romney likens hurricane relief to cleaning up "rubbish and paper products" from a football field. Is he joking? 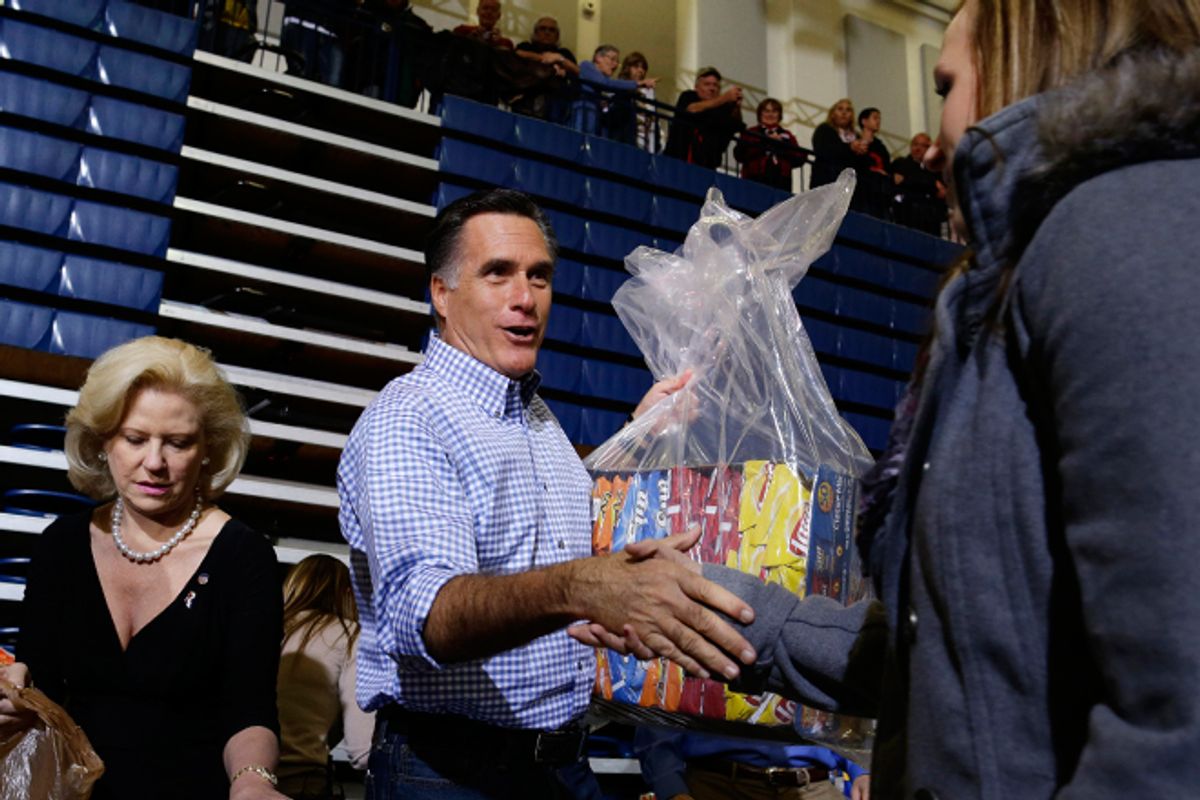 Mitt Romney accepts donations of food as he participates in an Ohio campaign event collecting supplies for victims of Hurricane Sandy. (AP/Charles Dharapak)
--

It's become a platitude to say that no one should be playing politics with Hurricane Sandy, but that's silly. When the performance of government suddenly becomes a literal matter of life and death to many Americans, we ought to be thinking about what kind of government we want to have, and that involves politics.

It's impossible not to see that this storm has devastated Mitt Romney's presidential candidacy. The response to the hurricane has seemed like one long dramatic Obama campaign commercial, a lesson in "We're all in this together," while Romney, the man who said he'd dismantle FEMA, flails on the sidelines.

Romney's "relief" event outside of Dayton, Ohio, was surreal enough to be a campaign parody, with the candidate comparing the federal government's hurricane relief efforts to the time he and some friends had to clean up a football field strewn with "rubbish and paper products." It was supposed to be a parable of how Republicans handle disaster – with private charity, not government intervention – as Romney told his audience, "It's part of the American spirit, the American way, to give to people in need." The Republican went on to talk about the time some Hurricane Katrina survivors were rerouted from Houston to Cape Cod and the good people of Cape Cod responded by donating food and, yes, television sets.

Of course, as Alex Seitz-Wald writes, the Red Cross and other private charities are discouraging the donation of goods, preferring that kind Americans donate funds that can be used where they're needed, not goods that must be sorted and distributed and may not even be necessary (television sets?).

Romney promised to put the goods on a truck to where they're needed, "I think New Jersey," he said.

That was a funny choice. Maybe it had to do with the fact that New Jersey Gov. Chris Christie has all but endorsed Obama in the last two days, repeatedly praising his "leadership." He told the crew on "Morning Joe" that "It’s been very good working with the president. He and his administration have been coordinating with us. It’s been wonderful.” He told "Today" that FEMA's response has been "excellent," and he's repeatedly tweeted his thanks to the president.

OK, let's be honest: The New Jersey governor has not been Mitt Romney's most loyal foot soldier. He was quick to join the calls for Romney to release his tax returns earlier this year, and his keynote speech in Tampa was more like a Christie 2016 campaign kickoff than a tribute to Romney. There's obviously a heavy element of self-interest in Christie's response. His approval as governor hinges on how he handles the storm, and so do his presidential aspirations. He's got a huge incentive to work well with the president. He's also got some incentive to stick a shiv in the flailing Republican contender, since a Romney loss would clear the way for a Christie 2016 bid as well. He's clearly playing politics here.

But really, outside of Romney's embarrassing European tour this summer, when he insulted Britain over Olympics planning and divulged a secret briefing by MI6, this is Romney's worst moment yet. As the storm approached, political reporters dredged up his pledge to "absolutely" restructure FEMA to give power to the states. At a Republican debate in June 2011, he suggested the private sector should do more, because federal spending even on FEMA was “jeopardizing the future of our kids.”  Tell that to the kids of New Jersey, Gov. Romney. And of course the Ryan budget would slash funding for FEMA.

After Romney's laughable relief event Tuesday, reporters swarmed him to ask if he still favors sending FEMA funding and responsibility back to the states.  From the Romney pool report:

"Gov are you going to eliminate FEMA?" a print pooler shouted, receiving no response.

Wires reporters asked more questions about FEMA that were ignored.

Romney kept coming over near pool to pick up more water. He ignored these questions:

"Gov are you going to see some storm damage?"

"Gov you've been asked 14 times, why are you refusing to answer the question?"

Romney won't answer because he can't. We saw him pivot to the center, to become the white Barack Obama, in the three debates, as he realized his unpopular policies and his contempt for 47 percent of the country was dooming his presidential bid. He's got no standing now to talk about how he'd handle this disaster. The heroes of Sandy, so far, are the first responders, the cops and firefighters and emergency technicians, the folks evacuating patients from hospitals and trapped citizens from flooding. These are the people who've been demonized by Republicans for the last two years:  the public workers who have become the new "welfare queens." When Obama pushed a jobs bill that would have helped states and cities avoid laying off such workers, GOP Senate Minority Leader Mitch McConnell derided it as a "bailout," and Paul Ryan, of course, voted against it.

To top it all off, George W. Bush's laughable FEMA director, "Heck of a job, Brownie" Michael Brown, is criticizing Obama for reacting too quickly to Sandy. Are Democrats paying Brown to remind voters of the contrast between Obama's quiet competence and Bush's disastrous handling of Katrina?

As I write, the president is arriving at a Red Cross site to ask Americans for donations. Chris Christie, meanwhile, has rebuffed Romney's offer to visit New Jersey's devastated shore. (Politics aside: Really, what could Romney offer?) I can't be sure whether or how much disaster relief will matter to swing state voters outside of the hurricane zone, but I am stranded (on a blue island) in the swing state of Wisconsin, where people are tuned in to the storm and the government response. No one can be reassured by Romney's empty posturing. Unless there is some government-abetted or neglected further disaster, I think Obama will be reelected next Tuesday. Hurricane Sandy has reminded us what's at stake.