A meningitis epidemic that has killed 25 is linked to a Mass. company Romney's administration failed to regulate 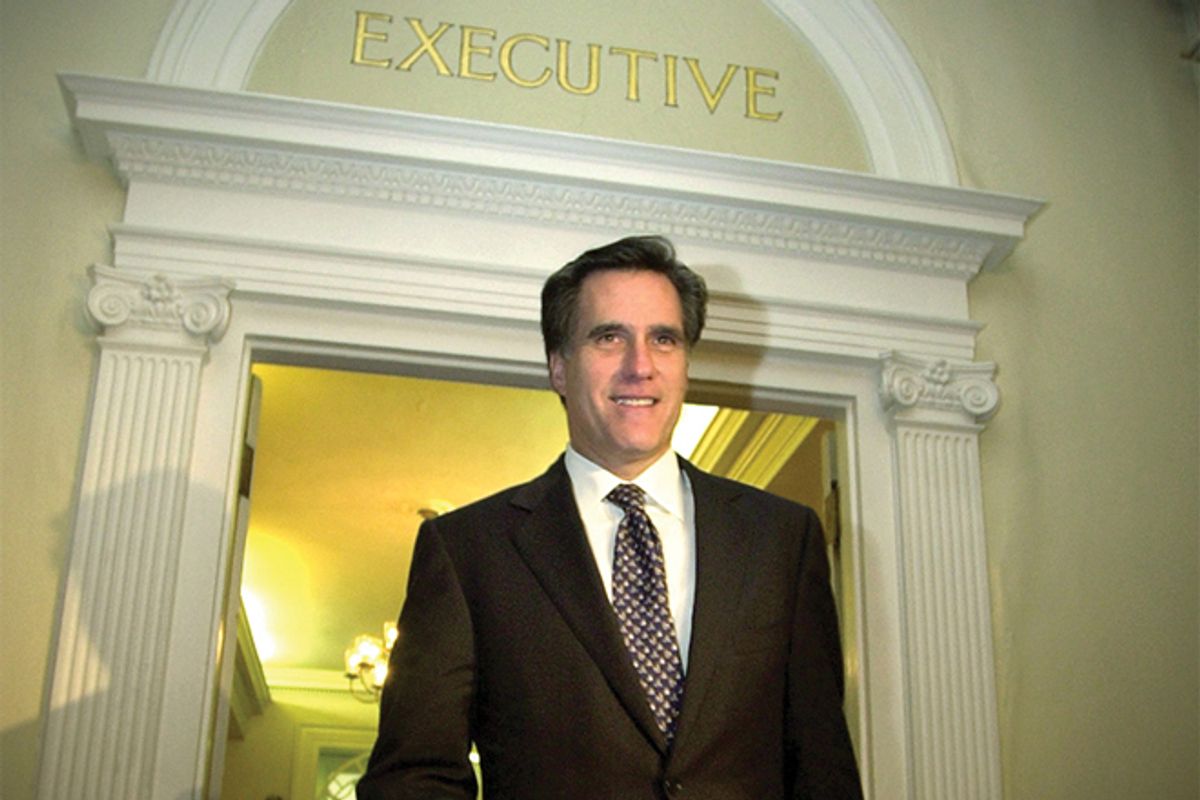 The fatal meningitis epidemic sweeping the United States can now be traced to the failure of then-Gov. Mitt Romney to adequately regulate the Massachusetts pharmaceutical company that is being blamed for the deaths.

At least 344 people in 18 states have been infected by the growing public health crisis and 25 have died so far.

But the epidemic may also play a role in the presidential campaign, now that state records reveal that a Massachusetts regulatory agency found that the New England Compounding Co., the pharmaceutical company tied to the epidemic, repeatedly failed to meet accepted standards in 2004 — but a reprimand was withdrawn by the Romney administration in apparent deference to the company’s business interests.

“It goes all the way up to Mitt Romney,” said Alyson Oliver, a Michigan attorney representing victims of the outbreak. According to Oliver, on at least six occasions, NECC was cited by authorities for failure to meet regulatory standards and almost subjected to a three-year probation. “It goes directly to the heart of what Romney says about regulation, ‘Hands off. Let the companies do their thing.’”

“When the person who is supposed to be in charge of oversight does not believe oversight is necessary, this is what happens,” Oliver added.

“The philosophy of the Romney administration was to have lax regulations across the board,” Philip Johnston, a former secretary of health and human services in Massachusetts before the Romney administration, told Salon. “It speaks volumes about the tragic outcome of Romney’s view on regulatory issues. There are two dozen people who died needlessly. It was clearly the responsibility of the company to protect them, but it was also the responsibility of the government at various levels, and, as far as I’m concerned, they failed.”

On Oct. 28, Rep. Ed Markey, D-Mass., called for “a full investigation” into the regulatory issues that led to the epidemic. “There’s a regulatory black hole here,” he said, “but the full assessment of responsibility, state to federal, is ongoing. We need to know everything.”

The owners of NECC have made campaign donations both to Romney and to Massachusetts Republican senatorial candidate Scott Brown, Salon has learned.

The victims in the epidemic all received shots of methylprednisolone acetate, a steroid compound often used to alleviate back pain, but which was tainted with a fungus that caused meningitis, an inflammation of the protective membranes covering the brain and spinal cord.

According to CBS News, federal authorities announced they had matched a fungus responsible for the epidemic with more than 50 unopened vials of the drug sent out by New England Compounding Center, a Framingham, Mass., pharmaceutical company that has been identified as the source of contaminated drugs. Over 17,000 vials of the tainted drugs linked to the epidemic have been shipped to 76 different facilities throughout the country.

On Tuesday, Oct. 23, state authorities said they would open a criminal investigation and move to revoke NECC’s license after finding that the pharmaceutical firm did not test lab equipment properly, failed to sterilize medications and repeatedly shipped orders for the drug without confirming that the lots had been sterilized.

Meanwhile, the Massachusetts Department of Health released documents dating back more than a decade that revealed a series of regulatory citations involving NECC.

In 2002, the Food and Drug Administration filed a confidential report alleging that two patients had suffered “adverse effects” after injections of an NECC compounded betamethasone repository, a steroid that is different from the one under scrutiny in the current epidemic. A few months earlier, New York resident William Koch became ill with bacterial meningitis after receiving injections of the steroid. According to an AP report, NECC settled a lawsuit in the case after he died in 2004.

In all, Massachusetts state records revealed that between 2003 and 2006, there were six complaints regarding NECC and its co-owner, Barry Cadden. At least one of these complaints alleged that NECC’s methylprednisolone acetate failed to comply with pharmaceutical standards. This is the same drug involved in the current epidemic.

In October 2004, the Massachusetts Board of Registration in Pharmacy, a state regulatory agency reporting to Gov. Romney, offered to let NECC enter into a consent agreement that would have acknowledged professional misconduct by NECC warranting disciplinary action, a public reprimand and three years probation.

But in a letter dated Nov. 11, 2004, Paul Cirel, an attorney for NECC, argued that such disciplinary action would be “potentially fatal” to NECC’s business. In a footnote, he asserted, “Once disclosed, the reprimand will surely result in investigations/inquiries/investigations in those other jurisdictions. Regardless of the derivative actions taken, the attendant legal and administrative costs will be devastating.”

The letter added that instead of having the state monitor the company, NECC would be willing to “bear the burden of cost and monitoring and reporting compliance” in exchange for a non-disciplinary resolution.

The term of the “probation” would be one year, not three, and it was to be a non-disciplinary agreement that would not be reported to the National Association of State Boards of Pharmacy or other outside agencies.

Subsequently, in 2006, NECC was effectively permitted to monitor itself simply by assuring the board it was in compliance with all procedures. In a May 22, 2006, letter obtained by Salon, NECC co-owner Barry Cadden wrote the board a short letter saying, “I am pleased to report that the following actions have been completed” regarding several safety precautions.

“Romney was responsible for these agencies,” said Oliver, who is the lead attorney attempting to consolidate the meningitis cases. “They reported to him.” She added that under Chapter 13, Section 22 of the General Laws of Massachusetts, members of the Board of Registration in Pharmacy are appointed by the governor.

In October, NECC issued a statement saying, “We have voluntarily suspended operations while we assist authorities in this investigation. The fatalities and illnesses confirmed today by the CDC and FDA are tragic. The thoughts and prayers of everyone employed by NECC are with those who have been affected.”

Three of its facilities have subsequently been shut down by authorities.

WCVB-TV in Boston has reported that NEC president Greg Coniglario hosted a fundraiser for Sen. Scott Brown, bringing in $37,000 for the Brown campaign against Elizabeth Warren. Conigliaro and members of his family have reportedly given $10,000 of their own money to Brown.

In July, Brown was one of 10 senators to sign a letter to the Drug Enforcement Agency arguing that regulations on the compounding industry should be loosened.

Conigliaro also contributed $2,500 to the Romney for president campaign.