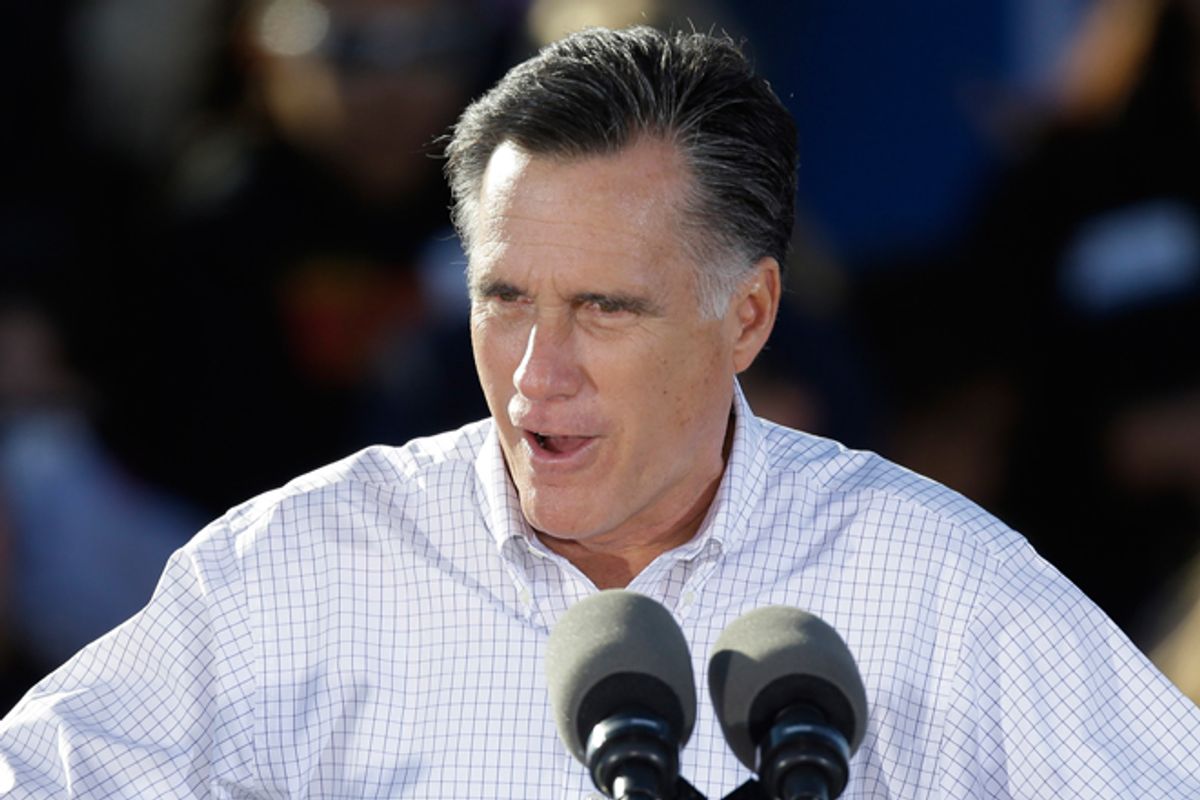 So if Mitt Romney got rid of FEMA, like he maybe wanted to do at some point, what would he replace it with? There would be state aid, of course, as he’s said, but also probably charity. Romney has given millions to charity over the years (most of it to his church) and putting relief efforts in the hands of private and faith-based organizations instead of the government is a classic conservative value.

Today, we got a look at Romney’s charity in action, when he held an event that he swears was not a campaign rally in Ohio aimed at “storm relief” (the choice of a song with the lyrics “Knee deep in the water somewhere” was perhaps ill advised). The Romney campaign encouraged attendees to bring canned goods, clothes and other items to be sent to hurricane victims. “We have a lot of goods here ... that these people will need,” Romney said in his brief remarks. “We’re going to box them up, then send them into New Jersey.”

This undoubtedly comes from a good place and with good intentions, but is hardly a substitute for the relief efforts -- in fact, it may actually hinder them. The Red Cross, for which Romney is soliciting donations, doesn't even accept goods. “Unfortunately, due to logistical constraints the Red Cross does not accept or solicit individual donations or collections of items. Items such as collected food, used clothing and shoes must be sorted, cleaned, repackaged and transported which impedes the valuable resources of money, time, and personnel,” the NGO's website explains. With financial donations, they can buy exactly what is needed closer to the site, and it helps stimulate the local economy in the process.

As Stacy Palmer, the editor of the Chronicle of Philanthropy, explained to NPR last year after Japan’s tsunami,  "Lots of people coming in with lots of donated goods often, instead of helping, gets in the way of really efficient disaster recovery."

FEMA agrees. “Remember, unsolicited donated goods such as used clothing, miscellaneous household items, and mixed or perishable foodstuffs require helping agencies to redirect valuable resources away from providing services to sort, package, transport, warehouse, and distribute items that may not meet the needs of disaster survivors,” the agency explains in its Tips for Donating and Volunteering Responsibly.

Mitt Romney’s home state of Massachusetts takes an even tougher stance. “Donated goods and volunteers that are not specifically needed in a disaster area can hurt more than help. Well-intentioned but ill-conceived shipments of goods and volunteers to an area impacted by a disaster can actually cause a ‘secondary’ disaster, in spite of the fact that donors really only want to help,” the Executive Office of Public Safety and Security, which he oversaw as governor, states.

To be fair, the Romney campaign has solicited cash donations to the Red Cross via social media and email as well, but the effort to cloak a political rally in a relief effort that will probably provide little actual relief seems disingenuous. Indeed, NBC’s Andrea Mitchell reports that the Red Cross told her they were “grateful for Romney donation but prefer people send money or donate blood don't collect goods NOT best way to help.”