A dispatch from the eye of Hurricane Sandy 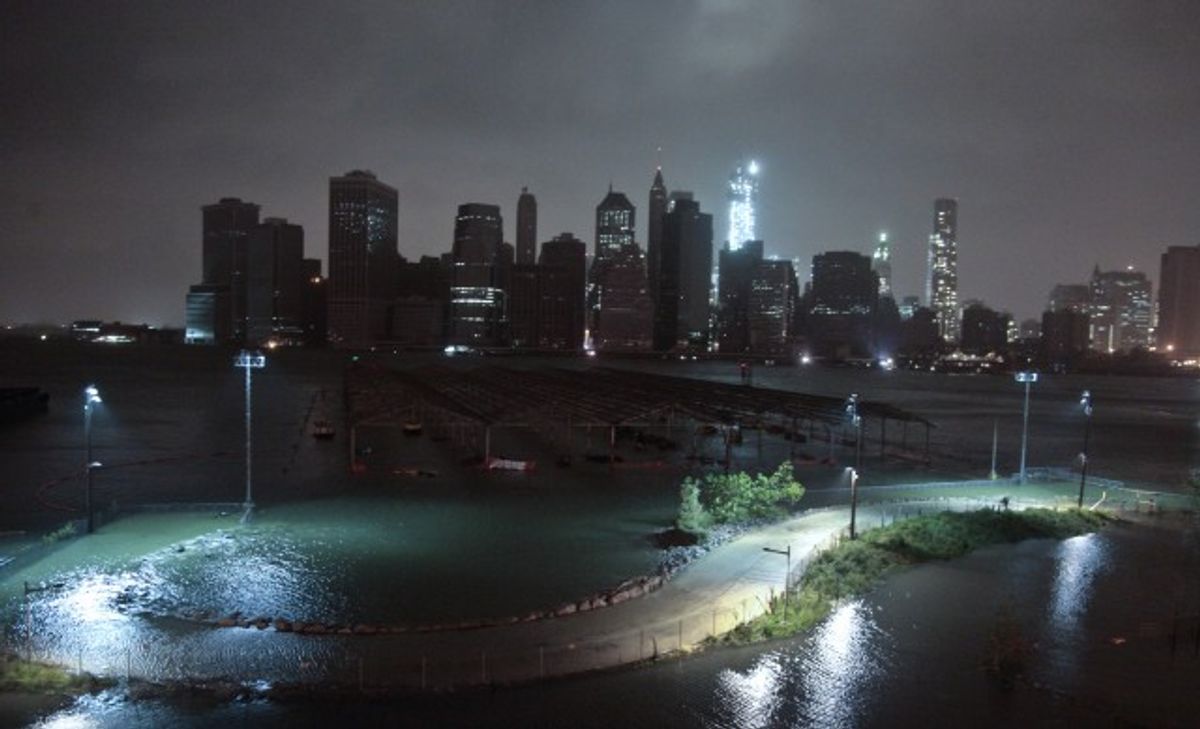 The high tide at 8:53 p.m. on Monday night, made higher by the full moon, sends the bay 13 feet over the Battery in Lower Manhattan. The Brooklyn Battery Tunnel is flooding; so are the subways tubes that cross the East River. At least 250,000 people are already without power in Manhattan. In the south, distant flashes of light look like explosions, diffused in the howling sky. From my rooftop in Brooklyn, the explosions burn for a long moment, then are gone. A half hour later, the sirens call out, the firetrucks and ambulances race, and I wonder what has happened. Nothing to do but head out into the wind on the bicycle—the ultimate hurricane-adaptive transport to move fast in a city where all public transit is shut—and take stock of the moment, for it is historic: This is the first major hurricane in the age of climate change to strike New York City nearly directly, drive the ocean across the land, and put the city in its place—low-lying, seagirt, exposed.

In 2005, Aaron Naparstek, a writer with the New York Press, published a remarkably prescient piece about the vulnerability of New York City to hurricanes, the flooding that would result along the hundreds of miles of shoreline in the five boroughs—with the water filling the sea-level interior flatlands and washing over the reclaimed swamps of Brooklyn—and the ill-prepared psychology of “a complacent coastal city” where the ocean is not thought of as a threat. Naparstek observed that in fact New York “is behind only Miami and New Orleans on the list of U.S. cities most likely to suffer a major hurricane disaster.” He cited meteorologists and disaster planners with the city’s Office of Emergency  Management who were in consensus “that the metropolitan region is due for a big one. Overdue, in fact.” Mike Lee, then Director of Watch Command at the OEM, told Naparstek that the worst-case hurricane scenario for New York City—in which 30 feet or more of storm surge sweeps over the city in a category 3 storm event—“gives emergency managers serious gastrointestinal distress.” Nicholas Coch, a professor of coastal geology at Queens College, said "The New York City area is the worst possible place for a hurricane to make a landfall."

New York City’s biggest vulnerability is the most unyielding geology. The New York bight is the right angle formed by Long Island and New Jersey with the city tucked into its apex. "Hurricanes do not like right angles," Lee says. "[They allow] water to accumulate and pile up."

Couple this with the fact that New York resides on a very shallow continental shelf, and as a big storm pushes north, New York Harbor "acts as a funnel." As storm surge forces its way into the harbor and up the rivers, it has nowhere to go but onto land. New York City, it turns out, has some of the highest storm-surge values in the country. "When we see a category-3 storm making landfall in Florida, it may only have a 12-, 13-foot storm surge," Lee says. "For us here, a category-1 storm can give us 12 feet of storm surge."

Storm surge is the dome of seawater that is lifted up and pushed forward in front of a hurricane. It acts almost like a mini-tsunami, causing sea levels to rise rapidly and violently. Most people believe that high winds and rains are the main dangers of a hurricane. In fact, inland flooding caused by storm surge is the big killer. In 1821, stunned colonial New Yorkers recorded sea levels rising as fast as 13 feet in a single hour at the Battery. The East River and Hudson Rivers merged over Lower Manhattan all the way to Canal Street. According to Coch, the fact that the 1821 storm struck at low tide "is the only thing that saved the city."

So here we are in 2012: Category 1 Sandy has sent 13 feet of storm surge over the Zone A mandatory evacuation areas outlined by the Office of Emergency Management. The difference today, as Coch notes, is that “now we have millions of people to offer the God of the Sea." Zone A includes Wall Street and Battery Park City at the tip of lower Manhattan, and it also includes a neighborhood ten minutes by bicycle from my apartment, a stretch of gentrifying waterfront and decayed public housing called Red Hook, which sits eye-to-eye with New York Bay (the street where I have my apartment is about 30 feet above sea level).

By 9 p.m., the water has engulfed the entire neighborhood, some four square miles. A lot of Red Hookers have refused to leave, and now they are trapped. The electricity is out, the streetlamps are snuffed, the night is black, the water cold and dark, a foot deep at my feet, much deeper further on—as far as I can see, which is not far. A cop rolls up in his cruiser and tells me not to venture on. “That water’s got a lot of sewage,” he says. I ask how high the surge has risen in Red Hook. “No clue, all we know is it’s done, the place is drowned.” The wind is ululating, smashing into the trees—I count two tall sycamores torn from their roots and hurled against brownstones, with many more trees exploded in the streets—and the sky is nausea-green. The floodwater, black and oozing, is singed on its surface with whitecaps. Gusting stronger now, the wind sweeps out the bicycle from under my legs and lifts my ski-cap off my head. Futile to give chase; the hat sinks in the water as if it never existed. I turn down a street toward the bay and scream to a halt at a downed powerline at throat level, barely visible. The bike goes into a slide.

Two EMTs idle in their truck at the edge of the surge, waiting to get into Red Hook. It strikes me that the water has stripped the landscape of street names, of the grid plan, and the neighborhood is now revealed in the contours of the land, its rises, its troughs, otherwise imperceptible but delineated by the flow of flood and not-flood. The EMTs tell me they’re getting bombarded with calls from inside Red Hook, but the truck threatened to stall out when they gunned it through the surge. “Streets are impassible. We can’t do a thing.” They would wait to watch if the water receded with the ebbing tide through the night.

Later, I head north and try to cross the Brooklyn Bridge on the bike—I want to see the drowned Battery—but it’s closed to all traffic, so I head along the Brooklyn Bridge Park waterfront, where a group of teenage boys doff shirts and pants and go swimming where the surge swallows the park and laps at the end of Atlantic Avenue. Up the block, the bartender at Montero’s Bar has stayed open. He has lived in this part of Brooklyn his entire life, has never seen anything like Sandy—never seen the water rise so high. We get to talking about what might be behind it, and I mention climate change. “Global warming? People can talk all they want, but since 1996 we’ve had four of the worst blizzards in city history.”

I wasn’t talking about mere warming, but what warming accomplishes. What we were seeing in Sandy—what we had seen in those blizzards—was the result of a more dynamic atmosphere, more charged with moisture, churning and unpredictable and ready to do greater violence. Climate change means that extreme weather events, cold and hot, will be the new norm in New York City. Sandy is a portent.