Chill out, it's just a costume

Mocking oversexed Halloween outfits has become a feminist tradition. Maybe it's time we let it go 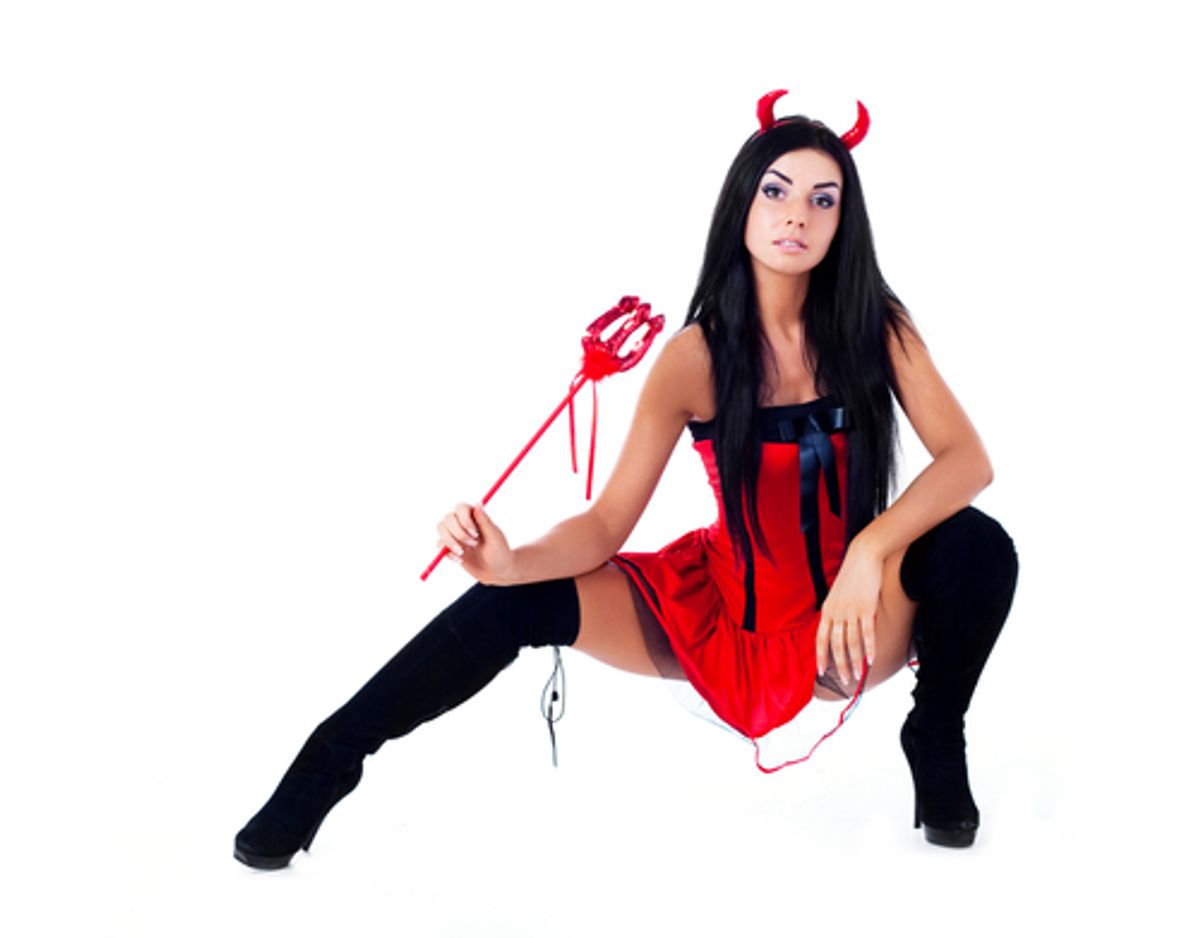 Every year, Halloween comes with its own predictable traditions: trick-or-treating, pumpkin recipes, costumes based on bad puns, and increasingly, the tradition of women wearing ever-skimpier Halloween costumes and feminists online decrying the trend through blogs and social networks. To quote the movie Mean Girls: “In Girl World, Halloween is the one night a year when a girl can dress like a total slut and no other girls can say anything about it.”

Mocking oversexed Halloween costumes is catnip to feminists. For one thing, it’s one of those arenas where the double standard is undeniable. Men’s costumes, at least those sold in Halloween stores, tend to be basic scary costume fare. Women’s costumes are so oversexed it gets silly. Sexy bacon? Sexy Finding Nemo? A sexy melon that is so sexy you can’t even tell what it’s supposed to be?

Halloween has become just as much a holiday for adults to dress up and party hard as it is about children and candy. Which naturally means pushing sexual boundaries, something feminists shouldn’t object to in principle. But overt objectification of women without a parallel version of boundary-pushing costumes on the male side makes it less sexual revolution than sexual reversion. Thus, feminist blogs like Jezebel and Feministing throw up annual posts denouncing the sexy costume trend.

This season, Dan Savage criticized feminist bloggers on his podcast, Savage Lovecast, saying that some of the arguments he’s heard are sex negative, shaming women for exploring their sexuality. He celebrated Halloween for being a heterosexual version of a pride celebration—an opportunity to celebrate sexuality and have some fun—and said that sexy costumes are a natural an unobjectionable part of this. He acknowledged the double standard, agreeing that it’s unfair that women are the ones who strip down while men don’t, but pointed out that the culture at large expects women to be put on display, an expectation which carries over into Halloween traditions. All this negativity around sexy female Halloween costumes just comes across as prudish, he argues.

Feminists aren’t being sex negative, though. We just get really uncomfortable with how Halloween exaggerates the already-existing heterosexual dynamic where men are subjects and women are objects. We also worry that women feel that if they don’t walk around half-naked on Halloween, they’ll be treated like joy-killers or prudes, which is unfair. We worry that men are being rewarded for exhibiting creativity in their costume choices, but women only get rewarded for showing off skin. It’s more complicated than Savage portrayed it.

Then, shortly after Savage’s podcast, Jezebel approvingly posted a music video from the group EmotiStyle, a goofy two woman rap group, called “Things You Can Be On Halloween Besides Naked.” While the song title suggests a song encouraging creativity and validating women who don’t want to simply wear a Sexy [fill-in-the-blank] costume, the lyrics themselves are aimed squarely at women who do wear something sexy on Halloween. The rappers go so far as to claim that showing cleavage means that a woman can’t be “classy." The video wouldn’t be out of place on a conservative website. It turns out, Dan Savage is right! Feminist critiques of sexual objectification on Halloween are devolving into sex negative carping about other women getting more male attention by wearing shorter skirts. Blogging about sexy Halloween costumes has become a parody of itself.

The cure for the sexy-Halloween costume problem is not to convince women to cover up. Many women have learned to strike a balance between expressing their sexuality and avoiding sexual objectification the other 364 days a year, so why wouldn’t they be able to work that magic on Halloween? At a party I went to Saturday, I saw plenty of women rocking sexy costumes that didn’t give off this vibe at all: A woman dressed hilariously as Cher from her video for “If I Could Turn Back Time," which seemed more brave than desperate. A group of friends wore elaborate Alice in Wonderland-inspired costumes that were confidently sexy. My own costume—one of the Doctor’s companions from Doctor Who—involved a miniskirt and fishnets. Real women out there are finding ways to create costumes with real sex appeal without sacrificing their dignity to do so.

Feminists aren’t wrong to want to go out on Halloween without getting periodically depressed by seeing women whose need for sexual validation overwhelms common sense and defies the chilling fall air. But maybe we’re going about it all wrong. Instead of simply attacking the concept of a sexy Halloween costume in the future, maybe it’s time to offer some positive examples of costumes that allow you to be both sexy and express your individuality and creativity.

And while we’re at it, maybe we can also do a little more encouraging of men to take it off for Halloween. After all, don’t they also want our attention?