Can Disney save "Star Wars"?

Getting George Lucas away from "Star Wars" can only be a good thing! But the larger significance may be dire 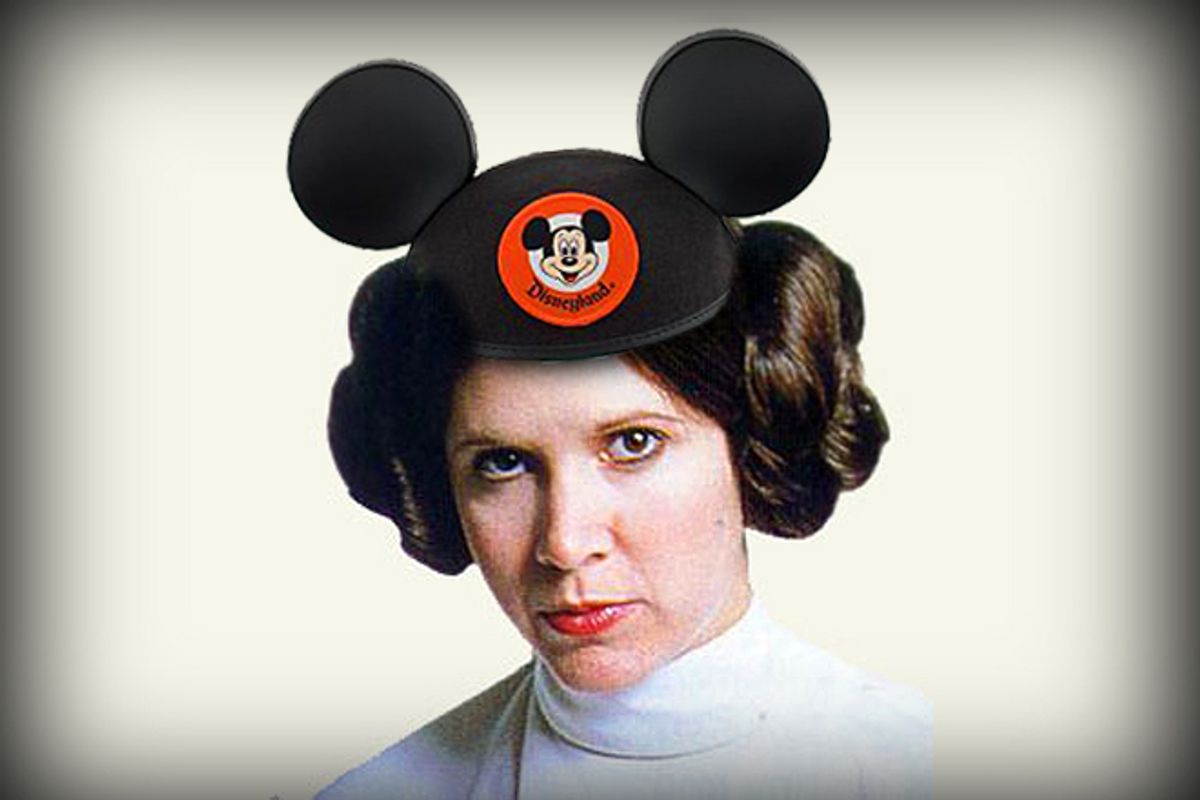 As some anonymous Wall Street dude explained to Sharon Waxman of The Wrap yesterday, the Walt Disney Co.’s blockbuster $4 billion purchase of Lucasfilm and the entire “Star Wars” franchise is best understood as a form of insurance – insurance against ever making “John Carter” again. Along with inspiring any number of humorous tweets and digital mashups of Mickey with a light saber or Princess Leia with mouse ears, the Disney-Lucas deal can both be described as a smart move, in the narrow sense, and also as an example of exactly what’s wrong with Hollywood. Today’s big players in the movie industry have grown so risk-averse and so focused on audience “pre-awareness” that it might be impossible for someone like the young George Lucas to emerge today.

This deal is an enormous gamble for Disney, certainly, but plausibly or probably one that will pay off big. “Star Wars” is deeply rooted in popular culture at this point – check out the number of 10-year-old trick-or-treaters wielding light sabers -- and my hunch is that the skeptics who think a new trilogy (tentatively scheduled for release in 2015, 2017 and 2020) won’t attract younger viewers are grievously misguided. Remember when some people suggested that “The Lord of the Rings” was a dusty fantasy franchise that only the ‘60s generation cared about? As Disney has proven with its takeovers of Pixar and Marvel Entertainment, the company knows how to nurture a golden goose without strangling it, and its merchandising and marketing apparatus are unmatched.

As to the aesthetic merits and mythological validity of a new “Star Wars” series, we’ll obviously have to wait and see, and I lack good standing in that debate. I was never a committed fan of the first trilogy, back in the day, although I certainly paid to see them all. As for the prequel trilogy that began with the much-mocked “Phantom Menace” in 1999, that increasingly looked like the work of a guy who was badly out of touch with contemporary culture and the ethos of his own creation. I’m sure this is a heretical view to many people, but removing George Lucas from any hands-on control over future “Star Wars” movies is likely to make them better rather than worse.

In a conference call with financial analysts, Disney CFO Jay Rasulo clearly positioned the Lucas deal as a strategic marketplace hedge: “We determined we’d be better off releasing a sequel to ‘Star Wars’ than most other not-yet-determined films. We love that this will take place in our release strategy as an already branded known property." Rasulo didn’t mention “John Carter” or the almost as calamitous “Mars Needs Moms,” to be sure, but he didn’t have to. The guy’s just doing his job, and as I’ve already said, given the terms of the discussion I agree with him. "Not-yet-determined films" present unknown risks; a seventh, eighth and ninth "Star Wars" movie present nearly none.

But it’s precisely the terms of the discussion – the bigger social and cultural picture – that need to be interrogated. Hollywood’s always been about making money, first and foremost; let’s not act naïve about that. David O. Selznick poured all that money and star power into “Gone With the Wind” because it was a bestselling novel that had swept the country, and he had an excellent chance of making a killing. But that same year, producer Mervyn LeRoy placed a longshot bet on a children’s fantasy novel that had been published 40 years earlier, casting an over-age child star in an elaborate musical that went back and forth between black-and-white and color. That bet didn’t pay off, at least at first; it required multiple re-releases for MGM to recoup its investment in “The Wizard of Oz.”

It’s probably fair to say that the American movie industry has gone back and forth, throughout its history, between periods of being more and less risk-averse. Entire books have been written on that subject, and I can’t do it justice here. Let’s suggest, as a general rule, that periods of explosive creativity like the late 1930s, the early 1970s and (to a lesser but significant extent) the mid-1990s involved a complicated set of interlocking factors that gave producers and directors permission to take chances and, yes, make mistakes.

With Hollywood feeling threatened on many fronts and facing a diminished or decentered cultural role, risk is now seen as unacceptable in itself, and every big-budget flop makes that worse. (Warner Bros.’ flawed but fascinating “Cloud Atlas” will serve as this year’s example. Even if it breaks even or comes close after worldwide release and ancillaries, its reputation is doomed, and the Wachowski siblings will have to sit in meetings with studio executives and be told to make “something more like ‘The Matrix.’”) That’s the true lesson of the Disney-Lucas deal: The Mouse is moving all its chips off new ideas and new productions, in favor of reheated hits from years gone by.

I participated, to some degree, in the critical dogpile atop Andrew Stanton’s “John Carter,” which was a dumb financial gamble and a doomed project from the get-go. I almost feel badly about that now – qua movie, “John Carter” wasn’t actually so awful, and the fact that Disney devoted all that money and time and energy to a first-time live-action director and an unproven science-fiction franchise suddenly looks like a lost golden age.