Even now, will Republicans nickel and dime FEMA? 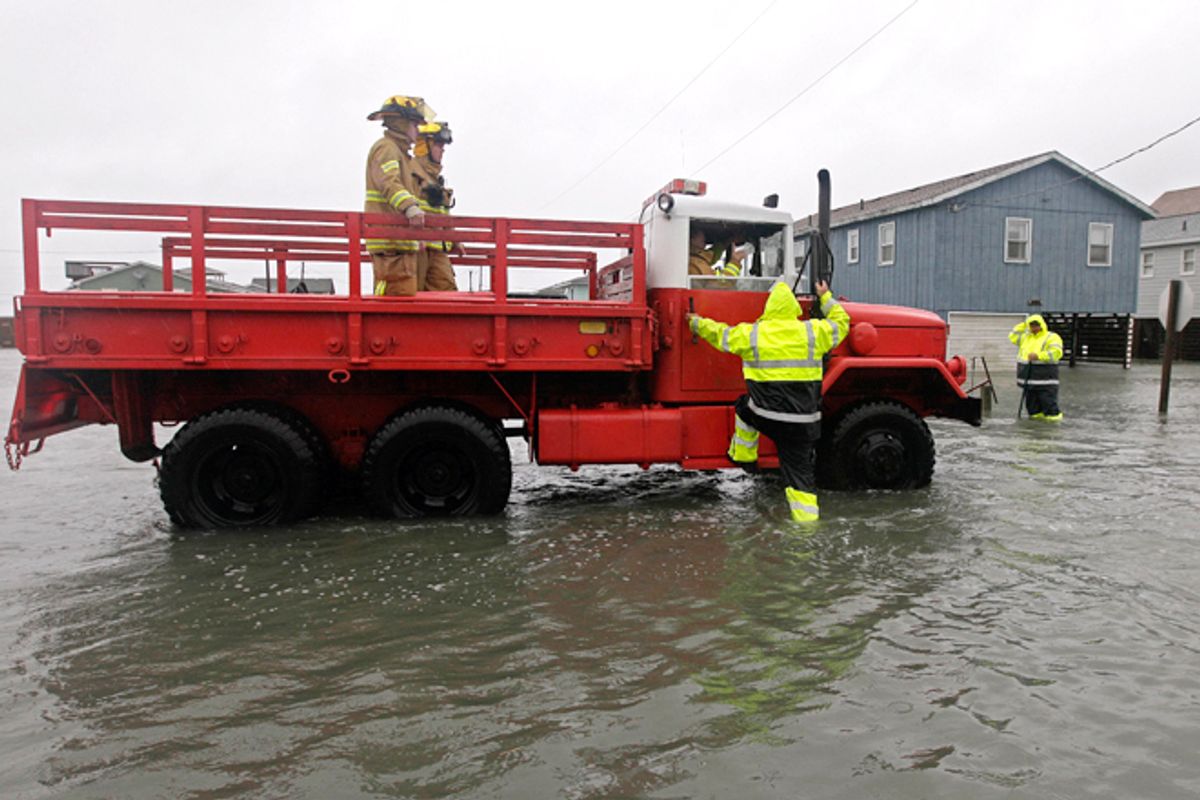 Now that the storm has passed and the cleanup has begun, the mess could move to Congress if Hurricane Sandy ends up costing more than is currently set aside for disaster aid. FEMA is actually in good shape at the moment, but it’s conceivable that its resources could be exhausted by the unusual destructiveness of Sandy, or depleted enough that FEMA will need to request more money from Congress in coming months. And if the dreaded sequester -- massive automatic spending cuts set to take effect at the end of the year, absent a deficit deal -- is allowed to go through, the agency’s budget will take a $900 million hit.

Congress will return for a lame duck session shortly after the election to face a jam-packed agenda, and Capitol Hill staffers are keeping an eye on the possibility of a need for supplemental disaster funding. "We don't know yet. FEMA has about $7 billion available in its disaster relief fund, which gives them cash to work with in the short term,” a Senate leadership aide told Salon. “But given the extent of the damage it's easy to imagine the cost exceeding that amount. No estimates or requests have come in yet, but we're monitoring and will respond accordingly.”

Given Republicans' recent insistence that new disaster funding be offset by spending cuts, there’s reason to worry. Last year, after devastating tornadoes and an unexpected earthquake, and with Hurricane Irene bearing down on the East Coast, FEMA was basically out of money. It had just a few hundred million left and was forced to start triaging its projects as it waited on Congress to send more money.

But instead of acting quickly to approve the funds, congressional Republicans, led by House Majority Leader Eric Cantor, took a principled stand against disaster funding, saying it was more important to prevent the deficit from growing than to supply the needed money. They insisted on offsetting cuts for new aid, most of which would have come from discretionary social welfare programs, like food stamps. Even as he was touring earthquake damage in his own district, Cantor refused to budge. “All of us know that the federal government is busy spending money it doesn’t have,” he said while inspecting damaged buildings.

“It’s just like any family would operate when it’s struck by disaster. It finds the money it needs to to care of a sick loved one or what have you and then goes without trying to buy a new care or put an addition on its new house,” Cantor told Fox News. Of course, a new car of home addition is a luxury. Replacing a home destroyed by a hurricane is not.

Asked if Cantor would maintain his position from last year, spokesperson Megan Whittemore noted that Congress approved an additional pool of money for disaster aid last year when they raised the debt ceiling. “One of the reasons House Republicans insisted on reforming the disaster-funding process, which we did as part of the Budget Control Act, was so that we would have a separate dedicated pot of money available based on historical disaster needs,” she told Salon. “The federal government must prioritize our spending, and one of the highest priorities should be major disaster relief when no other relief is available.” She added.

That gave FEMA a $6.1 billion fund and allowed the agency to roll over money from previous years. It also added some leeway to the spending caps instituted by the Budget Control Act. But anything beyond that sum will require congressional action. "I suspect Cantor does not want to re-litigate the FEMA fight from last year, but if he does, it's a fight we're happy to have," the Democratic aide said.

So will Congress need to approve new money? It’s unclear. One actuarial firm has estimated that Sandy's total cost could reach $20 billion. The bulk of the damage in natural disasters is usually covered by insurance, so that will be taken care of by the private sector. Most of the rest will come from FEMA, which pays for 75 percent of the recovery effort in areas declared disaster areas, along with states and municipalities. It’s impossible to know right now what Sandy will ultimately cost the federal government, but FEMA estimated yesterday it could be as low as $3.6 billion. That’s well within the more than $7 billion the agency has in its disaster relief fund. But costs often soar once the total damage is assessed. 2011’s Hurricane Irene, a far weaker storm, was originally estimated to cost about $8 billion and ended up costing $15.8 billion total (public and private sector costs).

And even if FEMA manages not to deplete its funds with Sandy, spending only the estimated $3.6 billion, that will still be nearly half its yearly allocation gone within the first months of the fiscal year, which begins on October 1. It seems likely that between winter storms and another hurricane season, FEMA may have to request additional monies before the new fiscal year. It would hardly be the first time the agency has run low on funds -- it says had to suspend some disaster payments in 2003, 2004, 2005, 2006, and 2010 due, it says, to budget constraints.

But things really gets scary if Mitt Romney is elected president and can implement anything like vice presidential nominee Paul Ryan’s budget proposal -- though it's difficult to say exactly how scary. Ryan’s budget doesn’t make specific cuts to programs. Rather, it calls for massive across-the-board cuts to discretionary spending and lets someone else (the Appropriations Committee) figure out exactly how those cuts get distributed. But going by his vague outlines, experts have estimated that disaster aid could be cut by as much as 40 percent or more.  It would also cut the budget by perhaps up to 60 percent of programs that help prepare for disasters, like weather forecasting. The Romney campaign, of course, insists that “A Romney-Ryan administration will always ensure that disaster funding is there for those in need. Period,” as a spokesperson told the Washington Post.

But as the New York Times pointed out in an editorial yesterday, over the past two years, “Congressional Republicans have forced a 43 percent reduction in the primary FEMA grants that pay for disaster preparedness. Representatives Paul Ryan, Eric Cantor and other House Republicans have repeatedly tried to refuse FEMA’s budget requests when disasters are more expensive than predicted, or have demanded that other valuable programs be cut to pay for them.”

Iowa Republican Rep. Steve King, the Tea Party darling who often gives voice to the thinking of the conservative id, explained last night that people who take disaster aid are little more than mooches. "I want to get them the resources that are necessary," King said of hurricane victims last night  in a debate with Democratic challenger Christie Vilsack. "But not one big shot to just open up the checkbook, because they spent it on Gucci bags and massage parlors and everything you can think of in addition to what was necessary," he added of victims of Hurricane Katrina.