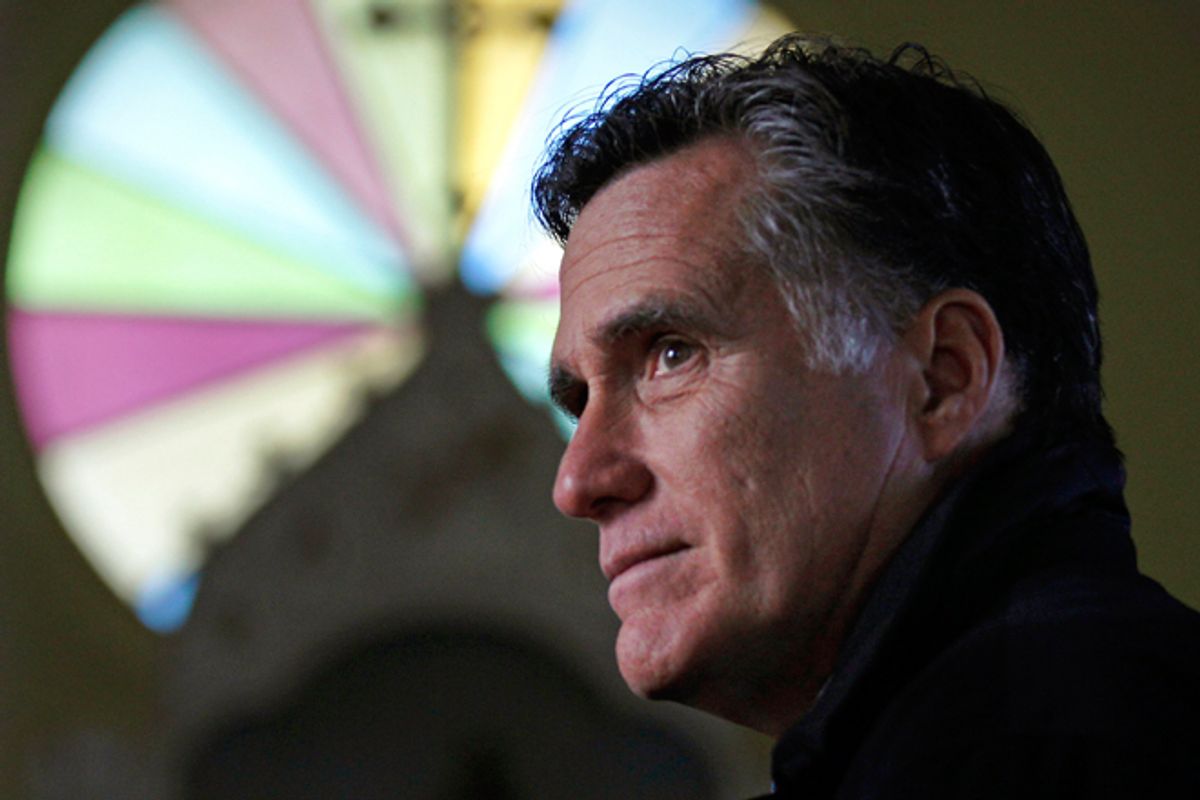 We already know that Mormon Mitt Romney has been tremendously generous to his church, giving over $5 million in the past two years alone, but now we learn that his charitable activity with LDS may not have been entirely altruistic. Bloomberg’s Jesse Drucker reports that Romney exploited the church's tax-exempt status to lower his tax bill.

Romney reportedly took advantage of a loophole, called a charitable remainder unitrust or CRUT, which allows someone to park money or securities in a tax-deferred trust marked for his or her favorite charity, but which often doesn’t pay out much to the nonprofit. The donor pays taxes on the fixed yearly income from the trust, but the principal remains untaxed. Congress outlawed the practice in 1997, but Romney slid in under the wire when his trust, created in June 1996, was grandfathered in.

The trust essentially lets someone “rent” the charity’s tax-exemption while not actually giving the charity much money. If done for this purpose, the trust pays out more every year to the donor than it makes in returns on its holdings, depleting the principal over time, so that when the donor dies and the trust is transferred to the charity, there’s often little left. The actual contribution “is just a throwaway,” Jonathan Blattmachr, a lawyer who set up hundreds of CRUTs in the 1990s, told Bloomberg. “I used to structure them so the value dedicated to charity was as close to zero as possible without being zero.”

Indeed, this appears to be the case for Romney’s trust as well. Bloomberg obtained the trust’s tax returns through a Freedom of Information Request and found that Romney’s CRUT started at $750,000 in 2001 but ended 2011 with only $421,203 -- over a period when the stock market grew. Romney’s trust was projected to leave less than 8 percent of the original contribution to the church (or another charity that he can designate).  This, along with the trust’s poor returns -- it made just $48 in 2011 -- suggest the trust is not designed to grow for the LDS church but just serve as a tax-free holding pool from which annual payments can be disbursed to the Romneys.

This is hardly the first tax-avoidance strategy Romney has employed. It's well known that he holds offshore bank accounts in Switzerland and the Cayman Islands, but he has used more obscure vehicles as well. There’s the "total return equity swap," where a taxpayer calls a stock he owns by another name and doesn’t pay taxes on it. There’s the way he’s been avoiding gift and estate taxes through a trust that he set up for his children and grandchildren. And there’s the neat trick whereby private equity firms claim that management fees are capital gains and thus qualify for a lower tax rate than straight income. Bain Capital was known for pursuing an aggressive tax-mitigation strategy (they’re now under investigation for it), and so was Marriott Hotels when Romney was an influential board member.

And it's not just taxpayers who lose out. “The Romneys get theirs off the top and the charity gets what’s left," said Michael Arlein, a trusts and estates lawyer at Patterson Belknap Webb & Tyler LLP. "So by definition, if it’s not performing as well, the charity gets harmed more."