My lifelong pursuit of ghosts

Even in haunted houses, ghosts seem to elude the author. But that's not what scares her the most 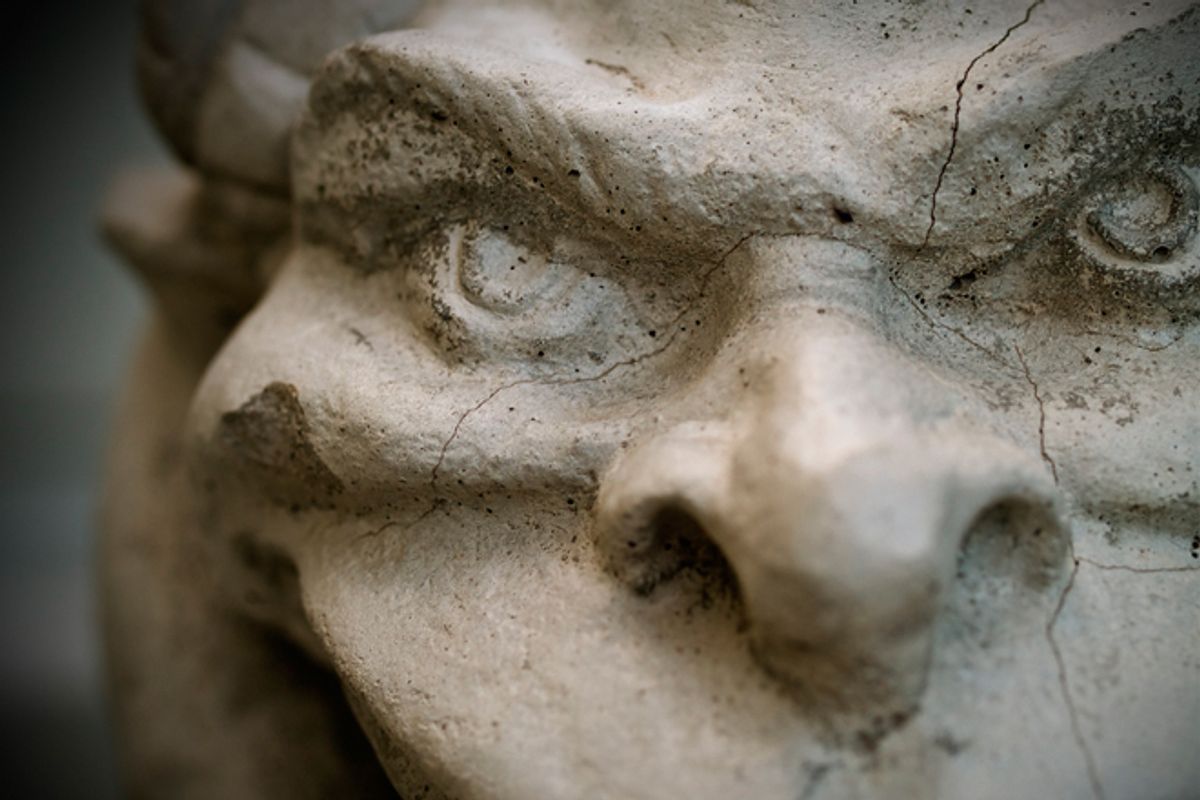 I really want to see a ghost.  It wasn’t always that way. Growing up in a very large, over 200-year-old house in Katonah, N.Y., I spent my childhood running through dark rooms praying I wouldn’t see — or hear — a ghost. For the 20 years my family lived there, things were fairly quiet. We had radiators in our room and in those very rare occasions when the heat came on, the sound of it was not unlike a poltergeist or an exorcism. And it was a very messy house so there was no telling if things had been moved or were missing, stuff got lost all the time, but it hardly felt any different than losing the one sock in the dryer. Katonah Woods, near our home, was supposedly haunted by the ghosts of Native American Chief Katonah and his wife, Mustato, who had been killed along with their child in a very bad storm. I knew this because when I was in kindergarten, I was sleeping over at my friend Patricia’s house (she lived on the still-dirt Katonah’s Wood Road). She told me in a very haunting voice that Mustato and the baby were in the teepee and the high winds of a thunderstorm blew them down a hill and Chief Katonah, in despair, threw himself after them … but on the full moon, they would walk … among the trees of Katonah Woods. I got up from her room, told her mother to call my mother to come get me. I was going home. And I would never walk to her house again, not even when I was in high school. (She tried backpedaling and saying the ghosts wouldn’t let people see them. Too. Late.)

When my brothers and I graduated from college, my parents decided to sell our home and buy land upstate where they would build a new passive solar house. It took longer than they would have wanted for our property to sell, so there was a long period of commuting back and forth from Katonah to the new village of Granville. Finally someone made an offer on the Katonah house. It happened while they were upstate. My parents came back to start the process and when they entered the house, the walls inside were wet. My mother said it looked like the house was crying. Very quickly the wet turned to mold, and they had a really hard time getting rid of it.  I saw it and it was the first and only time that made me stop and wonder if perhaps we had not been alone there. (It was much more palatable to think of this from my studio apartment in Manhattan.)

I have always been interested in ghosts, witches and hauntings. Halloween is my favorite holiday. I love old ghostly movies, spent a good year of my life reading everything I could on the Spiritualist movement in the Victorian era spawned by the Fox Sisters. Margaret, Kate and Leah Fox communicated with a spirit (Mr. Splitfoot, aka the devil) through his rappings (later admitting to my great disappointment that it was a [not-so elaborate] hoax). I’m attracted to ancient graveyards with hard-to-decipher headstones. I seek out gift shops in new towns and plunk down my $15.95 for the self-published "Saratoga County Ghosts" or "Florida Ghost Stories" or "Haunted Alcatraz."  None of the books is ever really satisfying, beyond benignly spooky folk tales.

The stories are usually something like, “Back in 1966 a woman was locking up the house when a rider in period dress approached her and asked for directions, she assumed he was taking part in a battle reenactment. Upon further inquiry it was discovered that NO REENACTMENTS WERE TAKING PLACE THAT DAY!” And so on. Many haunted houses are historic home museums, which offer wonderful setups for an unnerving scene to take place, and some employee will attest to the strange “chill” or “draft” they feel every time they enter Mrs. Plummingtons’s dressing room … the very spot where she died … while brushing her waist-length auburn hair (cue: crack of lightning).

I had just started dating my husband in 1999 when I invited him to join me the night before Halloween (All Hallow’s Eve Eve) at the Merchant’s House Museum for a talk called “The Ghosts of Merchant’s House.”

Built in 1832 on East 4th Street, a few blocks from Washington Square, the Merchant's House Museum is a unique survivor of old New York.  It is New York City's only family home that is preserved intact — inside and out — from the 19th century. Members of the Tredwell family — Mr. Seabury Tredwell (isn’t that a fantastic name?), a wealthy merchant; his wife, Eliza; and their eight children -- lived there from 1835 to 1933, when the youngest, Gertrude, died there. The interior is filled with the family's furniture and belongings, clothing and costumes, along with opulent decorative accessories. Personal possessions — unfinished needlework, family photographs, a shaving mirror and sewing boxes — which the brochure says “leave the impression that the family is still living there and has just stepped out for a moment.”

They are also the basis for Henry James’ novel "Washington Square," which spawned the play and the great movie "The Heiress" with Olivia de Havilland.

The story of "Washington Square" is of a rich, intelligent widower, Dr. Austin Sloper, who thwarts his plain and dull daughter Catherine’s chance at marriage by telling her the guy she wants to marry (handsome and charming Morris Townsend) is only after her money and, by the way, he will cut her off without a penny if she goes through with it. (He doesn’t want her to marry anyone because she takes care of him and then he’ll be left alone.)  She decides she will go through with it anyway, but Morris pulls out at the news of no inheritance; he probably does love her, but he doesn’t have any money and the prospect bums him out way too much. Her only reasonable  good Victorian plotline is to becomes a very bitter spinster with untweezed eyebrows, refusing even legitimate marriage proposals in the future. When her father dies, she finds out that he has left her only a portion of his wealth just in case Townsend reappears.  She actually goes from bitter to black living her remaining days alone in that house.

If anyone’s ghost should be lurking about their ancestral home, Gertrude Tredwell’s seemed a perfect candidate. Unfinished business, unresolved anger, spinsterly, dressed in austere Victorian mourning clothes and the parted-down the middle updo with the braids on top of her head.

We arrived at Merchants House, bought our tickets and were taken into the parlor where a movie projector was set up. I kept squeezing Paul’s hand; I was so excited. He raised an eyebrow and quietly said, “Take a look around.” It was a little bit of an eccentric-looking crowd, vintage clothes and hats, just a wee bit out of step, but it was a ghost lecture after all. It definitely wasn’t an information session on a timeshare in Hilton Head Island.

The executive director of the house introduced the lecturer, a Dr. Manuel Santiago, an expert from the Paranormal Society of New York.  He had a thick Spanish accent and an apparent vast knowledge of ghostly situations. Not, unfortunately, at the Merchant’s House, which he’d only just come to for the first time about 20 minutes before us.  That didn’t stop him from showing a lengthy slide presentation that included pictures of crucifixes, “floating orbs” and illustrations of women in the Victorian era in white dresses about which he would say, “One searching for a ghost in the Merchant’s House  might see an appareeshun of dees nature.”  Mmm hmm. Note to self: If you see a very sheer lady in a Victorian nightdress, it just may be a ghost. I watched him go through slide after slide of different examples of the paranormal. I wondered if he’d show us Casper or the Sta-Puff Marshmallow man.

After the less than informative talk, he opened the floor to questions.  Pretty much every hand but Paul's and mine shot up.

“Um, I smell burning toast sometimes in my house, I’m wondering if you think it’s haunted.”

“Hi, I feel a cold chill right by a drafty window in my home, I feel like it might be a ghost of Isadora Duncan. Do you think I should try and get rid of her or welcome her?”

“If I encounter a ghost and I don’t have holy water on me, can I use Evian?”

And on and on.  Paul was in stitches, I thought he was going to pee in his pants. I was kind of mad and incredulous. After hearing this idiotic excuse for a ghost lecture, the people were not only not put off, but were encouraged enough by Dr. Santiago’s vast knowledge to ask him what to do about their particular haunting situations. (They all seemed like they needed to up their doses.)

We were all invited to walk through the house after. Paul kept faking that he was being possessed or sensing ghosts. A woman behind me tapped me on the shoulder smiling and I thought she was going to chuckle with me about the charlatan, but no, she wanted to see if I too felt the presence in the house. I didn’t feel a presence, I felt an absence … of the 20 bucks I paid to get in. And I was mad and disappointed. I wanted to see some cool Victorian ghost, goddammit!

We went back to my apartment and Paul turned on the news. There was the usual litany of New York stories: unarmed man shot in the Bronx, the Dow dropping a gazillion points, this George W. Bush fellow seeming like he really had a chance against Al Gore, and two little Brooklyn boys so brutally abused by their mother, they were unrecognizable to their grandmother.