Sandy chasers: You are not all photojournalists 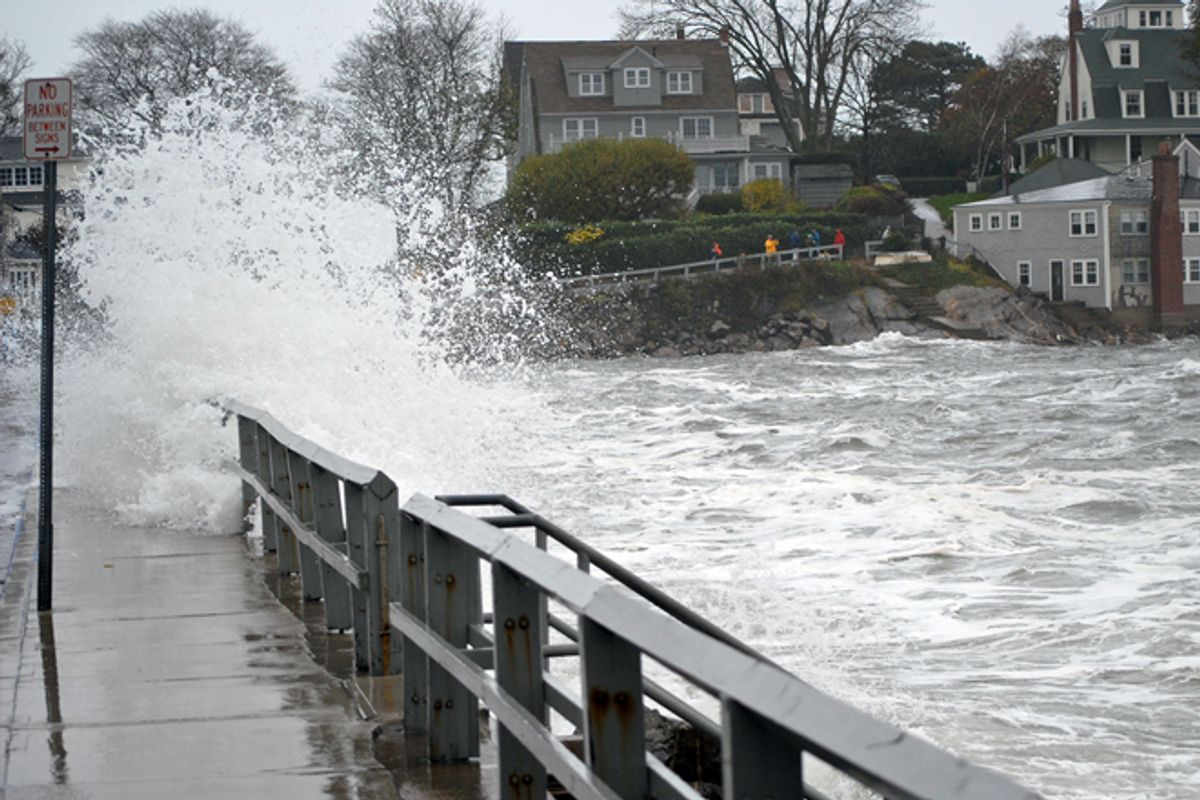 The great American photojournalist Robert Capa once declared, "If your pictures aren't good enough, you aren't close enough." But you, with the groaning Instagram feed and the monster-size Flickr set — he probably didn't mean you.

As Hurricane Sandy pummeled the Northeastern seaboard this week, Twitter streams soon clogged with dramatic images and every media outlet put out the call for material. It was an opportunity to share in a once-in-a-lifetime moment of epic proportions, to be awed and humbled by the massive power of the storm and the small moments of grace and humanity it inspired. It was also, for a whole lot of people with a phone, a dare from Mother Nature herself, a demand to get out and freeze the experience in an arresting shot. It was, in short, a great day to be stupid.

On Monday evening, my family and I sat holed up in our tiny uptown apartment, glued, like everybody else, to the local news. What struck me, as we channel-surfed the deluge, was the sheer volume of amateur storm chasers out there in the thick of it. Whether a reporter was standing in an evacuated area of Staten Island or in front of crashing waves down in Battery Park, there in the background was an ever present army of REI-clad shutterbugs, with iPhones at arm's length and expensive cameras on their noses, cheerfully snapping away. At the other end of the island of Manhattan, I saw a similar, albeit less immediately threatening spectacle firsthand. I live across the street from a New York City park — one that, like every other park in the city, was closed for the storm and remains so. Yet from my safe perch, I've spent the last few days watching intrepid picture takers stream in and out of the park. Some of them have brought their pets with them. Some have brought their children.

At the height of Sandy, an #instacane sprang up for images of the storm's trajectory, and Instagram CEO Kevin Systrom revealed the impressive statistic that "There are now 10 pictures per second being posted with the hashtag #sandy — most are images of people prepping for the storm and images of scenes outdoors." Outdoors, which is exactly where anyone in the path was explicitly not supposed to be.

In the midst of a crisis, there's a deep human need to share our stories. We want to see, we want to show. I've gasped at the already iconic images from the storm, and been amazed and saddened and relieved by the pictures my friends have posted on their Facebook pages of the scenes from their home fronts. I participated in it too.

I believe – and I still do – in the power of documenting experience. And yes, that includes the ubiquitous jazzed-up Instagram of a flower or a dog or some clouds. I also believe in not being an idiot, and know that possessing an app does not give one invincibility. We have become a world full of self-styled photojournalists and storm chasers and the truth is that most of us are woefully underqualified as both.

So while I watched in nervous horror as adventurers wandered through the park even as the winds howled and the trees swayed precariously, the next morning, when my family and I peeked our heads outside to go for a walk, I had only one overwhelming impulse when I saw the enormous tree uprooted not far from our front door. To take a picture. And then, to share it. Look at this, I thought. Everybody, look at this.

We walked cautiously around the neighborhood a bit, looping back down toward the park, now dotted with felled trees and tangled branches. And though we stayed on the other side of the street, I eagerly snapped away while my daughters chattered about the storm and their plans for yet another day off from school.

Later, my elder daughter beckoned me into her bedroom and asked me to shut the door. "I felt like you were on your phone too much this morning," she said. "You were out there taking pictures and not paying attention and I didn't feel safe."

My child's ideal of what's safe and responsible is different from mine, which is different from yours. Yet after our conversation, I thought of Robert Capa, who, hours after promising, "This is going to be a beautiful story," died on assignment in Vietnam when he stepped on a land mine.

We all have our boundaries – though I'll stick with the belief that if you're taking pictures when you're supposed to be evacuating, your priorities might need a major restructuring. And as a police officer standing outside the park ruefully told me this morning, "Common sense isn't so common." All I'm saying is, next time there's a natural disaster, ask yourself if you're really willing to die for a few "likes" on your Facebook page — not everything is a photo op.

My daughter's words have made me reconsider my own approach to photography, whether I'm out wandering after a storm or just sitting in front of a particularly beautiful cupcake. She reminded me that whether it's a life-jeopardizing situation or not, I don't ever want to be "not paying attention." It's more than just making sure I don't get clobbered by a heavy branch. It's about recognizing the difference between recording an event and living it. It's about choosing, as sanely and as often as possible, the latter. It's about knowing when to take the picture, and when to turn off the camera.