War with Iran: The spin begins

Americans are wary of military intervention, so what's a hawk to do? Easy: Just don't call it "war" 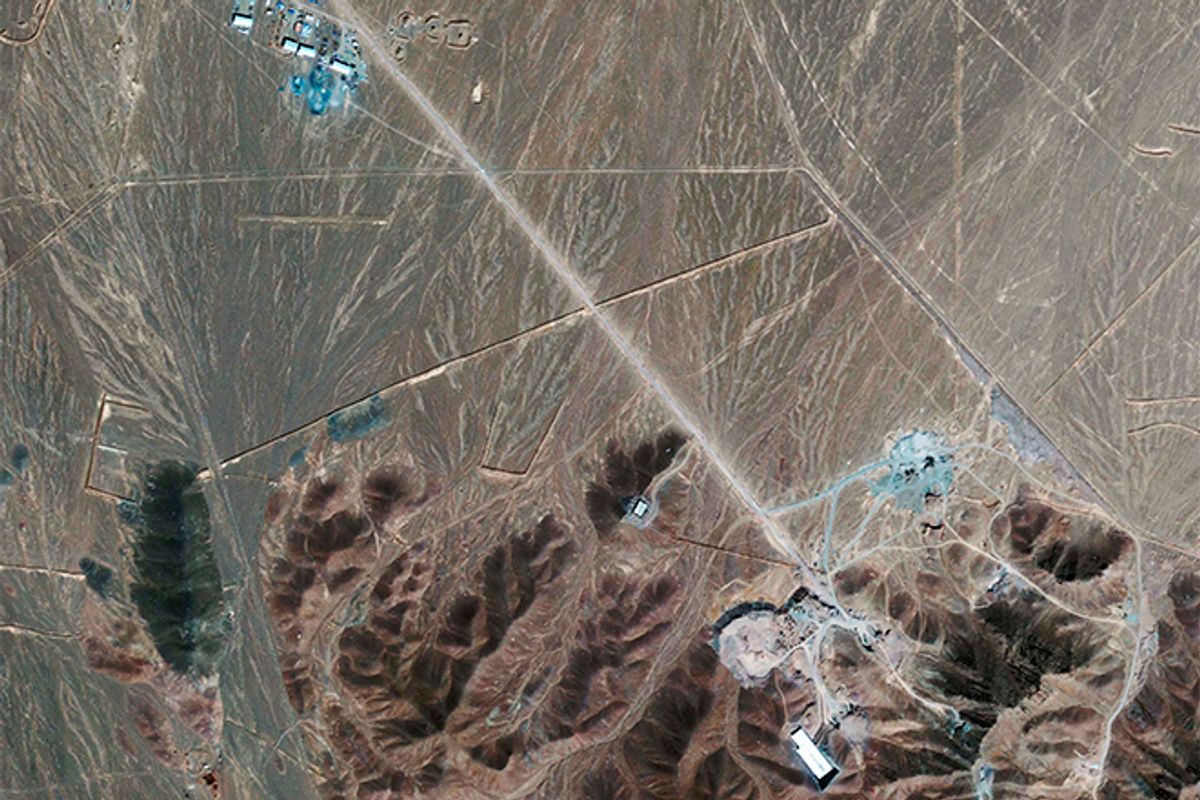 If you happen to be an American politician who wants to start a war in Iran and also wants to get reelected, you face a bit of a problem. After more than a decade of foreign wars, polls show both rank-and-file Republicans and Democrats want far fewer foreign military interventions. However, polls also show that a thin majority would consider supporting a war against Iran if that country was found to be building nuclear weapons.

This is likely why we've heard a lot of pro-war politicians and media types repeatedly suggesting that we know Iran is already building nuclear weapons. And, because of that drumbeat, polls show most Americans believe it is a fact that Iran is building such weapons. Yet, that's far from certain. While last week's New York Times report on Iran's Fordo facility certainly raises the specter of a nuclear-armed Iran in the future, the truth is that both the International Atomic Energy Agency and the United States' intelligence apparatus both say they have no proof that Iran is building such weapons right now. Indeed, under the headline "U.S. Agencies See No Move by Iran to Build a Bomb," as the Times reported a few months ago, "assessments by American spy agencies are broadly consistent with a 2007 intelligence finding that concluded that Iran had abandoned its nuclear weapons program years earlier." The paper added that this "assessment was largely reaffirmed in a 2010 National Intelligence Estimate, and that it remains the consensus view of America’s 16 intelligence agencies."

In the coming months, as the prospect of a full-scale war with Iran becomes more real and more central in our politics, this intelligence will probably be a discussion point, and many will start wondering why we would be initiating yet another preemptive Mideast war when our intelligence is so murky. That debate, if it is vigorous, will likely further erode already tepid support for a war with Iran. That gets back to pro-war politicians' original problem - how will they then still make their case for a war? As evidenced by a recent interview with one of Congress' top national security policymakers, the answer is that they will try to pretend a war is not a war, so that they don't have to make such an unpopular case in the first place.

As ThinkProgress highlights, the news here is that Rogers is smoothly inserting a devious argument - namely, that bombing Iran "is short of war."

In this, we see a disturbing trend, for his Orwellian language is eerily similar that used by the Obama administration in pretending the Libya War was not a war. Whereas back then then the catchphrase was "kinetic military action," now it is "short of war," but the phrases have the same 1984-ish meaning: War is peace, or at least not really war at all.

The self-evident motive in this sleight of hand is to effectively cut off popular participation and consent in national security decisions - ideals that had been among of the founding principles of American democracy. After all, if a war is no longer officially classified as war, a president no longer has to even pretend to need the congressional authorization for military conflicts that the constitution requires. That requirement was, of course, enshrined by the founders in the constitution specifically to guarantee at least some public debate over grave decisions about war and peace. But if war is no longer officially war, Washington can pretty much do whatever it wants without having to find out if the country wants the same thing.