Why Mitt Romney is no Chris Christie

For all his many faults, the New Jersey governor has leadership qualities the GOP nominee sorely lacks 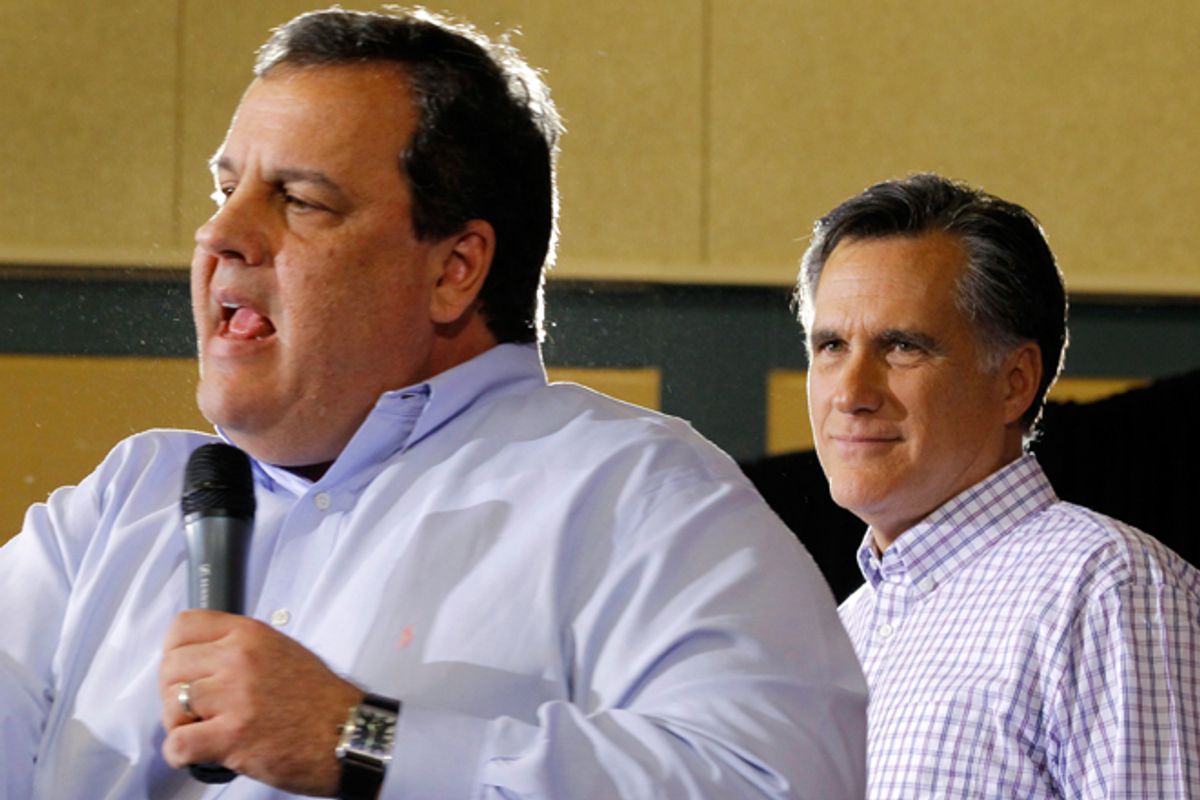 The most promising Republican leader on the national stage is confident, consistent and charismatic.  And he sometimes curses, too.  That leader is Chris Christie.  And Mitt Romney is no Chris Christie.

I’m not saying I support much of what Chris Christie stands for.  As governor of New Jersey, Christie raised taxes on the poor and middle classes while advocating tax breaks for the rich.  Christie vetoed marriage equality legislation and said that civil rights should have been subject to a “popular” vote in the 1960s. Christie pushed a voucher plan to drain money from public schools to fund private education while bashing teachers and other public sector unions.  And after all this, New Jersey’s unemployment rate hovers around 9.8 percent as of September — a full 2 percentage points higher than the rest of the nation.  Not much to be proud of there.

So this is not an ad for Chris Christie, it is an observation about what is missing in Mitt Romney.  Months ago, it was striking that Republicans as diverse as Ann Coulter and Henry Kissinger were encouraging Christie to run.  That’s not because they all agree with where Christie stands on issues but because Republicans simply like that Christie stands for something at all.  And yes, they like his tough talk.  In fact, after four years of the often-obsequious Obama, I like Christie’s tough talk too, even if I don’t like what he’s talking about.  And in the wake of Hurricane Sandy, Chris Christie is again coming across as the forceful leader Republicans wish Mitt Romney could be.

But the other important contrast between Chris Christie and Mitt Romney is that Christie is all over television this week rightfully praising President Obama’s leadership in disaster recovery. “The President has been outstanding in this,” Christie told the “Today” show.  On "Morning Joe," Christie said, “It’s been very good working with the president. He and his administration have been coordinating with us. It’s been wonderful.”  Contrast this with Romney’s failure to support President Obama’s leadership on healthcare reform (despite the fact that Obama copied Romney’s policy in Massachusetts) or in Libya and Iran (despite the fact that Romney repeatedly says he would do there what Obama is already doing).  Part of what makes Christie a maverick is his authentic willingness to call a spade a spade and a good idea a good idea, even if it came from a Democrat.  Republicans and Romney, who have done nothing but obstruct and attack from Day One, should take notes.

And yes, that includes federal disaster aid, which is a Democratic idea — one Republicans, including Mitt Romney and Paul Ryan, want to dramatically slash.  As a governor facing tough times, Christie values the role of the federal government in providing aid and oversight to states, especially in times of crisis.  CEO Romney simply wants to outsource everything to the state level, further drowning them in a fiscal disaster.

When President Obama tours storm-ravaged parts of New Jersey with Gov. Christie, Americans will see what it means for taxpayers and political leaders to come together and with strong leadership and investment in our common good.  Meanwhile Mitt Romney will be off campaigning to unravel the fundamental purpose of our nation.  The television cameras, and Republicans' hearts, will understandably be trained on Christie.