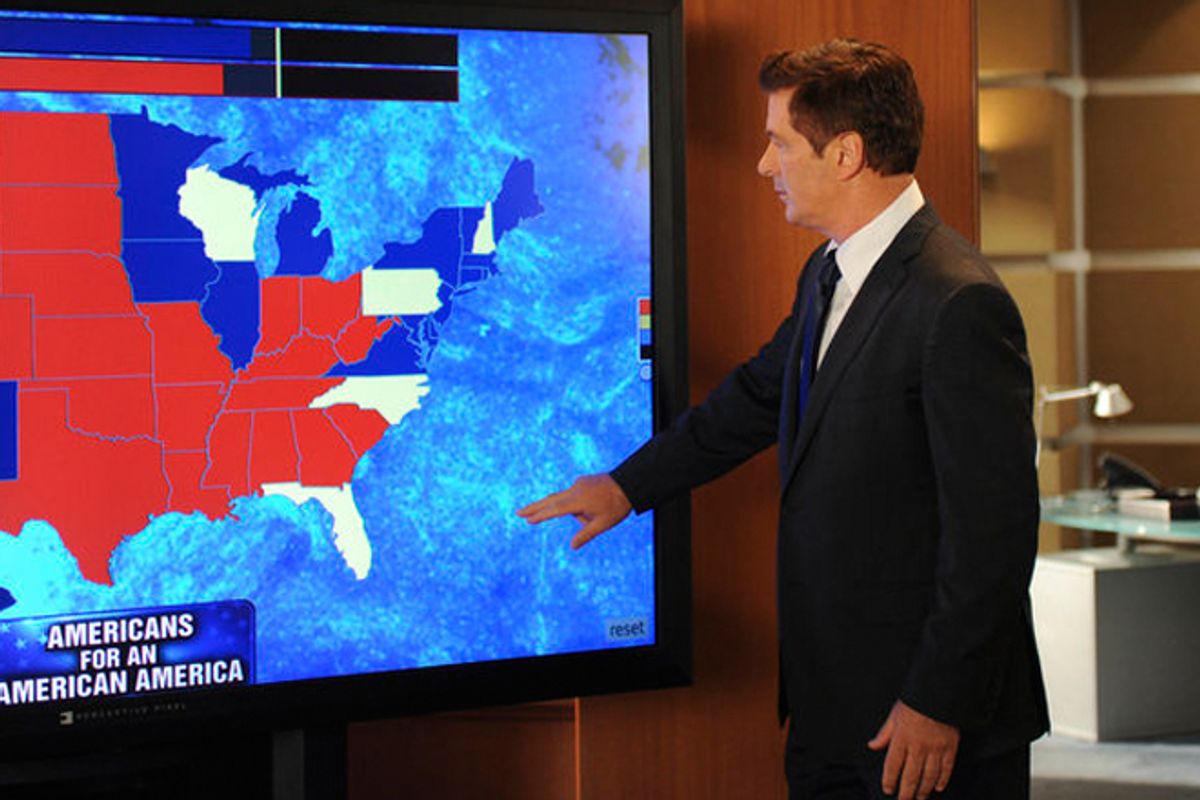 One of the more interesting critiques of “30 Rock” has been that it is much more conservative than it appears to be. Liz the liberal’s Democratic pieties are regularly shown to be just that, more often than not by Jack Donaghy and his smooth conservative perspective. “30 Rock” is an equal-opportunity skewerer — everything and everyone is exposed for their inner dopiness and hypocrisy eventually — but the show has often gone harder on goofy Liz, and her unexamined beliefs, than the unflappable Jack.

But “30 Rock's” politics have always felt familial to me. In the way that it’s OK for you to talk smack about your relatives, even though no one else can, “30 Rock’s” flaying of Liz’s beliefs always feels like it's coming from a place of deep familiarity and identification. If “30 Rock” goes hard on Liz’s politics, it’s still tough to imagine that anyone who wildly disagrees with them would find this sitcom funny.

Last night was the quintessential example of this. The episode, which aired in a special Wednesday time slot to run before the election (Sandy has screwed with NBC’s normal Thursday lineup), was a follow-up of last week’s bravura installment. At the end of that episode, Liz and Jack simultaneously realized that Jenna Maroney, with her undue influence on the Unwindulax community in Florida, would decide the general election — or rather, the “Jenna-ral” election. This week, Liz and Jack staged a debate to convince Jenna whom to vote for, with Liz repping Obama and Jack speaking for Romney, “the first really rich president.”

Jack won, but not on merits. Both Liz and Jack attempted to shamelessly flatter the egotistical Jenna, and Jack did a better job. Liz mentioned a young girl getting an arts education who was one of Jenna’s biggest fans; Jack mentioned that under Romney there would be no arts education, thus “Our schools would be producing no new actresses, and Jenna Maroney would get all parts. That’s my America and that’s Mitt Romney’s America.” Jenna asked which political party was coolest. Liz replied, “No contest, the president listens to hip-hop rappings,” before listing attractive female celebrities. Jack followed with a list of lame white guys before sealing the deal: “You’d be the only cool Republican.”  Jack and conservatism “won,” but by manipulating mediocre aspects of the conservative platform to appeal to a self-involved idiot.

“30 Rock” took an ax to Romney, failing to say one decent thing about him, but it didn’t make a euphoric case for Obama either. While Liz was getting out-maneuvered by Jack in the debate, Pete was running around the office trying, in vain, to recapture the spirit of the 2008 election.  Jack might have won, but “30 Rock” was comedically portraying the liberal predicament in 2012: disappointment in Obama — hope and change and making out with people on election night are gone for good — and horror at the Republican platform. (“Do you really want a bunch of old men behind closed doors deciding what you can and can’t do with your body?” Liz asks Jenna. “Ooh, how do they tell me their decisions? Do I get shocked when I do the wrong thing,” Jenna wonders in reply.)

At the end of the episode, Liz got Jenna banned from Twitter, so she couldn’t tweet her Romney endorsement anyway. She walked into Jack’s office to tell him so, and predicted he would say “it was all part of his plan” — that this too would be another example of smart, conservative Jack “teaching” liberal Liz a lesson. It wasn’t. Jack had already decided against Jenna endorsing Romney. “I didn’t want her choosing our president,” he said. “No one should grow up in Jenna Maroney’s America.” Which, as this episode of “30 Rock” had made clear, would be Mitt Romney’s too.