Can a centrist win in Arizona? 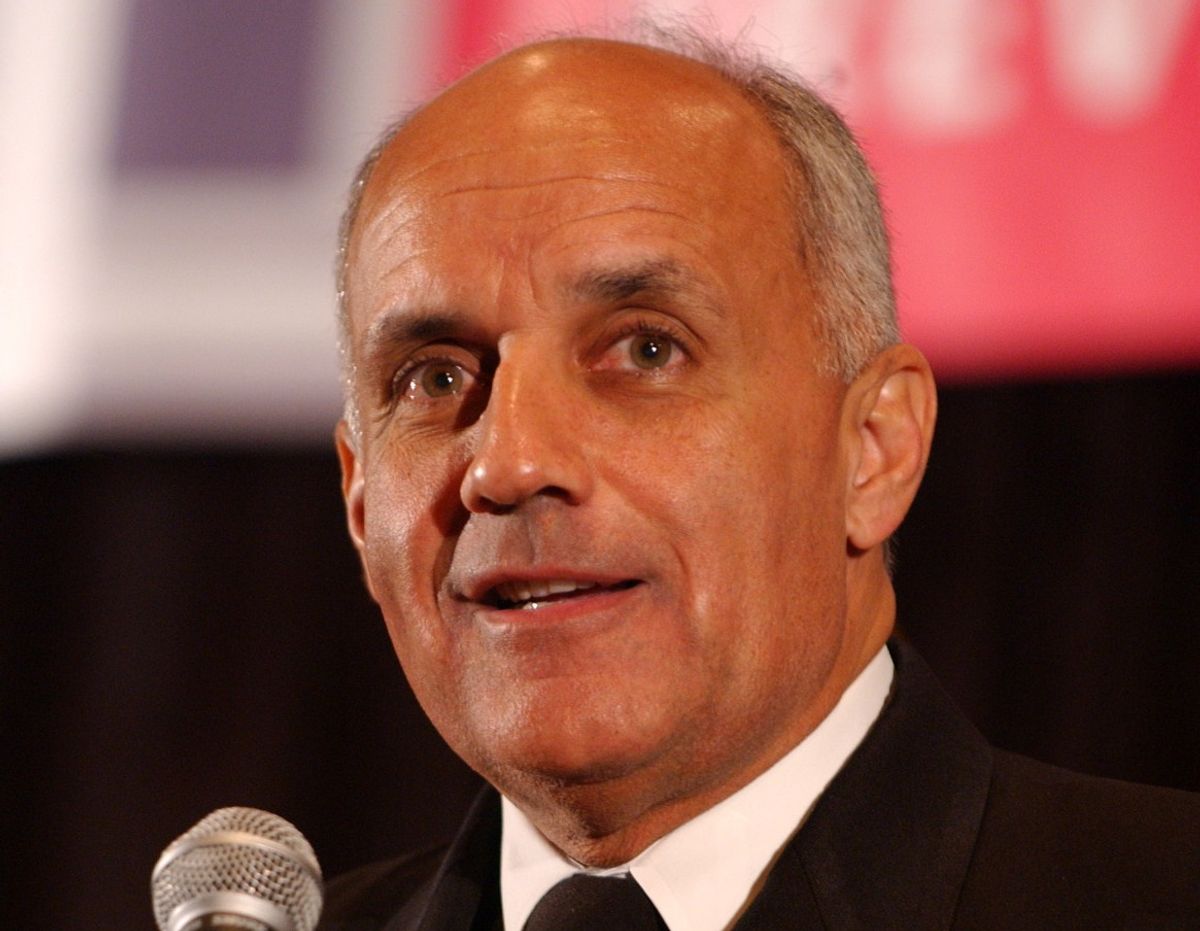 Richard Carmona might be new to campaigning, but he’s not exactly new to politics. In 2005, he was a recruiting target for Republican Senator Jon Kyl and his ally in the statehouse, then-secretary of state Jan Brewer. Phone calls were made, meetings were held, and Kyl even sent Carmona a handwritten note on his personal letterhead: “For someone who’s ‘not so political’ you sure leave an audience in awe,” Kyl wrote. “Thanks for all you did for me in Phoenix last week. I look forward to continuing our discussion at your convenience.”

It’s not hard to see why Kyl—and by extension, the Republican Party—had an interest in Carmona. Just look at his biography: A Puerto Rican raised in Harlem, he dropped out of high school at 16, and shortly after enlisted in the Army. He earned his G.E.D, joined the special forces, fought in the Vietnam War, and received training as a combat medic. He’s received degrees in nursing, biology, medicine, and public policy. He's run hospitals, health care systems, and served in law enforcement.

In the end, Carmona declined Kyl’s offer and continued his work in the Bush administration, as U.S. surgeon general. He would leave that post in 2006, and the following year he would accuse the administration of political interference and ideological pressure; Carmona claimed that officials wanted “watered-down” reports on any number of public health concerns, including second-hand smoke.

Over the last two months, all of this has become relevant (again) to Carmona’s life. He finally entered politics—as a Democrat, though he identifies as a “life-long independent”—and is facing Republican Congressman Jeff Flake for the Senate seat vacated by Kyl. Given the state's conservative bent—Republicans have a nearly six-point voter-identification advantage—and Carmona's inexperience, few gave him a chance at the outset. But with the state's growing Latino electorate at his back, Carmona has made it one of the nation's closest Senate contests by conducting a non-ideological crusade for better government—often the only path Democrats have to victory in red states, and one that's especially effective against a candidate whose conservatism is his defining attribute.

Flake has the fresh-faced looks and extremist persona of a Tea Party newcomer—he is a tireless opponent of federal spending—but he’s been in Congress for a decade. First elected in 2001—before that, he was executive director of the right-wing Goldwater Institute—the 49-year-old Flake is one of the few House members to have a 100-percent rating from the American Conservative Union. There are a few bright spots in his record—he supported a precursor to the DREAM Act in 2007 and voted to end Don't Ask, Don't Tell—but by and large, he’s what you would expect: pro-life, intensely opposed to “pork barrel” spending, and an eager supporter of Paul Ryan’s draconian budget. Flake is, on some level, a more authentic opponent of spending than most Republicans—he was removed from the House Judiciary Committee for incessant criticism of earmarks.

In the Republican primary, Flake beat his closest opponent—businessman Will Cardon—by more than 40 points, bolstered by his combination of deep support from the state’s Republican establishment and his ties to right-wing activists. In addition to endorsements from Kyl and Senator John McCain, Flake held support from Club for Growth—the right-wing anti-tax group that supported his first campaign for Congress—and FreedomWorks, a Tea Party-friendly super PAC.

Whereas Flake began the general election with an assault on Carmona’s party identification—calling him a “rubber stamp” for President Obama—Carmona has focused on improving his name recognition, touting his biography, emphasizing his independence, and tying Flake to the unpopularity of Congress as a whole—in other words, the classic campaign of an outsider. Yes, it sounds generic. But it’s working, in large part because of the 62-year-old Carmona’s compelling biography. As a candidate, Carmona has not spent much time talking about what he wants to do; the issue briefs on his website are thin, and judging from the emphasis—deficit reduction, “accountability,” and immigration—it would be fair to place Carmona on the “blue dog” side of the Democratic Party. He once declared his aim to be a “centrist force” in Congress.

The main focus of Carmona’s campaign—and in fact, the race writ large—is who he is. His first ad was purely biographical, focusing on his time in the Army and presenting him as a “problem solver,” not a politician. This was followed by ads touting his independence from both parties: One hit Democrats and Republicans for getting it “wrong” on health care (no mention of how to do it right, however), and another features Carmona explaining how both parties have failed Arizona and the country. The latter includes several headlines that describe him as a “maverick,” like a certain other Arizona senator.

Indeed, like most politicians looking to present themselves as bipartisan, Carmona touts endorsements from Democrats and Republicans, including support from members of the Goldwater family. He routinely mentions his time in the Bush administration, and in a recent move he released the letter Kyl sent him in 2005 in order to push against charges that he would be a reliable vote for Obama.

Flake’s response has been to target Carmona’s strength and try to damage his credibility with voters. In one advertisement, meant to question Carmona’s temperament, Dr. Cristina Beato, the former acting assistant secretary at the Department of Health and Human Services during Carmona’s time in the Bush administration, describes how “how Carmona pounded on her door in the middle of the night to talk about trips he wanted to take as U.S. surgeon general that she declined to approve.” This story has never been verified, but for Flake's purposes, the truth of it is less important than the message: Carmona has too much of a temper for the Senate.

Carmona hasn’t always helped his cause. In a recent debate he “joked” that the male moderator was “prettier” than presidential-debate moderator Candy Crowley, an awkward comment that has done nothing but bolster Flake. Indeed, just last week, the Flake campaign ran an ad calling Carmona a “bully” who “demeans women.” The Carmona campaign has responded with, among other things, an ad that highlights McCain’s support for him during his 2002 confirmation hearing for surgeon general, along with Kyl’s political request in 2005.

Neither side is debating policy—which is actually good for both. Carmona doesn’t want to remind Arizonans that he’s a Democrat, while Flake wants to avoid further attacks on his record in Congress; Carmona has run ads taking Flake to task for voting against veterans services.

Though Flake entered the final week of the campaign with a slight advantage, Carmona is closer to winning than anyone expected at the beginning of the year. For the last month, the race has been a dead heat, with Carmona and Flake trading leads from week to week.

One problem with judging the race is the lack of nonpartisan polls—the most recent are either from GOP or Democratic firms, while the remaining surveys come from pollsters, like Rasmussen, that have had a Republican lean for most of the election cycle. That said, Carmona can’t win without sizable gains with independents, and a nontrivial number of Republican votes. Polls that show him with a lead—such as the most recent survey from Public Policy Polling—give him high favorability, a big edge with independents (52 percent to Flake’s 37 percent), and double-digit support from Republicans (14 percent).

It's impossible to discuss Carmona’s performance without acknowledging the extent to which Latinos have helped make the state competitive. If Carmona wins, it will—to a large degree—be because he managed to mobilize the state’s large and growing Latino population while minimizing his losses among the state’s right-leaning white voters. Since 2002—the last time a non-incumbent Democrat won statewide office—the state’s demographics have moved in a direction that favors the party. From 2000 to 2010, the number of Latino residents in Arizona increased 16 percent to 30.1 percent of the population, or just under 2 million people. At the same time, the state’s Latino electorate has grown to 16 percent of voters in 2008.

Indeed, it’s fair to say that if McCain hadn't run in 2008, odds are good that Barack Obama would have won Arizona and swept the Southwest. His strength with Latino voters gave him large wins in the rest of the Southwest, where he exceeded John Kerry’s performance by 14 to 16 points. But in Arizona, McCain held on to 44 percent of Latinos, blunting Obama’s ability to run the table. If Obama had won 67 percent of Arizona’s Latinos—as he did nationally—he would have won 48 percent of the vote regardless of his performance with any other group. From there, 50.1 percent would have been a stone's throw away.

This year, with the national race much tighter, Arizona isn’t close; Mitt Romney is almost certain to carry the state with ease. But the underlying trends are still there: Latino immigration is pushing the state away from its Republican roots, and toward a new normal where both sides are competitive. Even with his moderate views and his distance from the Democratic Party, a Carmona win would be a major sign that Arizona is making a slow—but steady—shift to the center. It may take a while—another decade, perhaps—but it will happen. And when it does, the national electoral map will become a little more difficult for the GOP.