Denzel Washington is magnetic, but "Flight" is half thrilling moral drama and half Dr. Phil recovery special 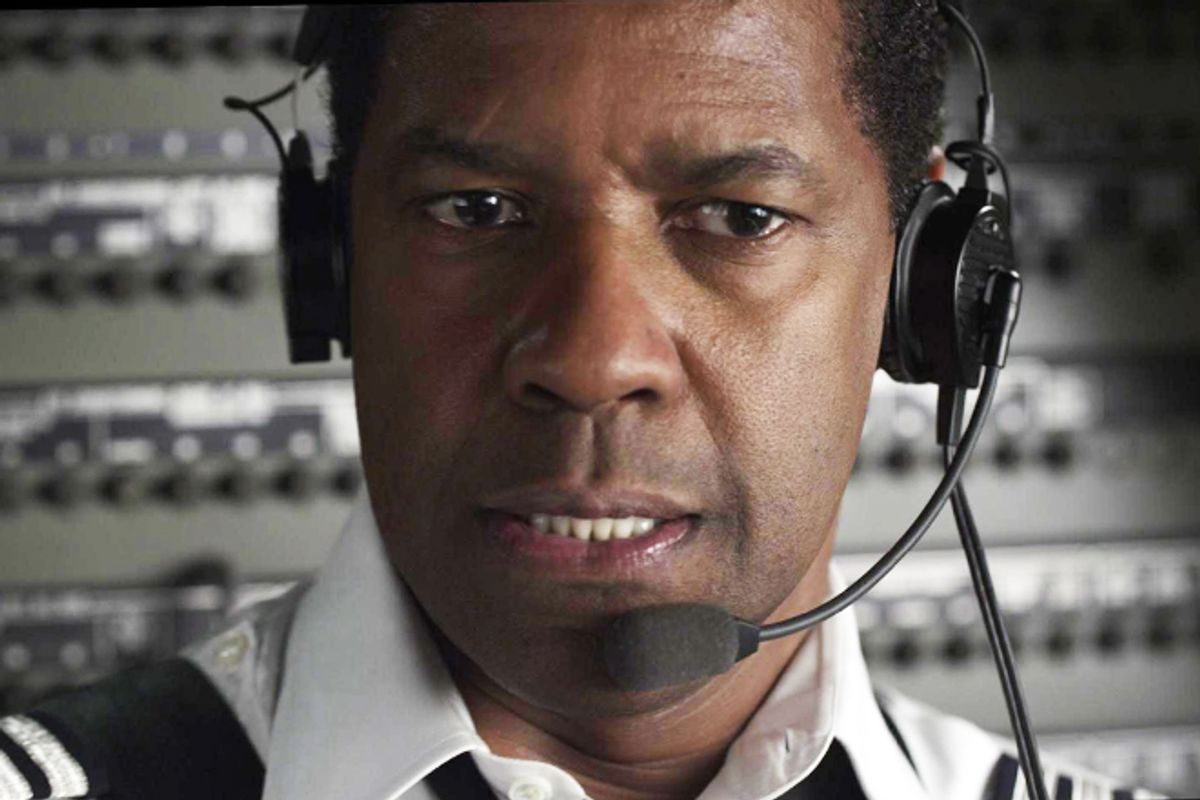 At this point it’s a total cliché to describe Denzel Washington as one of our greatest screen actors. I’m not disputing the point, but the problem with Washington is in fact the atmosphere of Great-Actorliness around him, which sometimes ennobles his movies but can just as often diminish them. With his impressive physical presence, ladykilling charm and stern, sarcastic demeanor, Washington strikes me as a movie star from a different era, perhaps the age of Clark Gable and Laurence Olivier. That overlooks the obvious fact that a man of Washington’s background and color could never have been a major star in an earlier day, but that too – that sense of belonging both to the present and the past – is part of his appeal.

Washington often seems to be playing Shakespeare even when he isn’t, and in a great many of his movies one wishes he were. He’d clearly be a terrific Othello – and I know how that sounds, picking the only major African role in English drama – but he’d be outrageously good as Macbeth or Henry the Fifth as well, and he’s drawing close to the age when he could play Lear. Since I’m getting myself in hot water, I’ll go further: Washington might fit best projected some centuries into the future, into a universe of “post-racial” entertainment that none of us will ever see. As excited as I am to see Daniel Day-Lewis play Abraham Lincoln, for example, I think Washington would be even better. And not playing Lincoln as “black,” in some racially reversed alternate universe or whatever. Just playing Lincoln.

There are intimations of those distant possibilities throughout Washington’s career; in Robert Zemeckis’ alternately thrilling, tedious and moralistic “Flight,” as in many of his recent films, Washington plays a black man whose race is mentioned only indirectly and plays no major role in the plot. Capt. Whip Whitaker, Washington’s character, both is and is not based on Chesley B. “Sully” Sullenberger, the pilot who successfully ditched US Airways Flight 1549 in the Hudson River in January 2009. That is, Whip faces a test at least as dire as Sully’s and passes it with flying colors, regaining control of an Orlando-Atlanta commuter flight that has gone into an uncontrolled dive and making an emergency landing in a pasture.

It’s a bravura, edge-of-your-seat sequence that may provoke panic attacks in nervous fliers, brilliantly orchestrated by Zemeckis, cinematographer Don Burgess and editor Jeremiah O’Driscoll, and I won’t spoil it any more than I have to. But even before we get on board that doomed plane, “Flight” has constructed a mood of menace and mystery around Whip and his story. Among other things, we know that he’s been up all night boozing and partying with a hot flight attendant named Katerina (Nadine Velazquez), and that before heading to the airport he snorted up two robust rails of cocaine in order to “get straight” for the flight. Then there are the two empty minibar bottles of vodka that crash investigators will find in the garbage, even though there was no beverage service on the flight. (Let’s be ultra-triple-clear that these are fictional elements, with zero relevance to the real-life Sullenberger story.)

We’ve also been introduced to a scrawny, redheaded, mouse-eyed Atlanta junkie named Nicole (English actress Kelly Reilly, who pretty much nails the dirty-South accent), but given no indication of when or how her story intersects with Whip’s. All in all, it’s a terrific beginning to a complex moral drama, constructed with imaginative cross-cuts, that seems poised to suspend judgment and ask challenging questions: Can a hero still be a hero when he’s also a liar, a raging hypocrite and an uncontrolled alcoholic who has willfully endangered the lives of others? And can this immensely arrogant man find salvation in the arms of an abused, lower-class woman with negative self-esteem?

Unfortunately, the final two-thirds of “Flight,” following that dazzling beginning, is almost an entirely different kind of movie – or several different kinds, most of them regrettable. We get some agreeable comic business from John Goodman, supplying his wild-man shtick as Whip’s ponytailed neighbor and drug dealer, along with an ice-cold supporting performance from Don Cheadle as the straitlaced lawyer hired to squelch the alarming toxicology report and get Whip off the hook, but who basically despises him. As so often happens in Hollywood, John Gatins’ screenplay seems to have been built around the star rather than the story, and Whip withdraws from the procedural drama and the crash investigation to a rural retreat – his granddad’s farm, no less – first to battle the demon of alcohol and then to surrender to it wholeheartedly.

Slowly but surely, “Flight” degenerates from a tale of moral paradox and wounded romance into a mid-1990s after-school special about addiction and recovery. You get the feeling the filmmakers are aiming for a star-driven combo of the Sully saga and “Crime and Punishment.” But Zemeckis is a technical wizard who will always be best known for the “Back to the Future” movies, and has spent the last decade playing with funky-looking motion-capture animation (“The Polar Express,” “Beowulf,” “A Christmas Carol”). Drama just isn’t his instrument, and what he ends up with here feels more like one of Dr. Phil’s weirder case histories than like Dostoevsky. As for Denzel Washington – what do you want me to say? This may be his best role since “Training Day,” which is, unfortunately, not saying that much. He’s compelling every second he’s on-screen, even when what he’s saying is dopey. But he deserves more and better.