Get ready for the phony debt fight

Both candidates agree: The national debt is the most urgent challenge facing the nation. But it's not -- at all 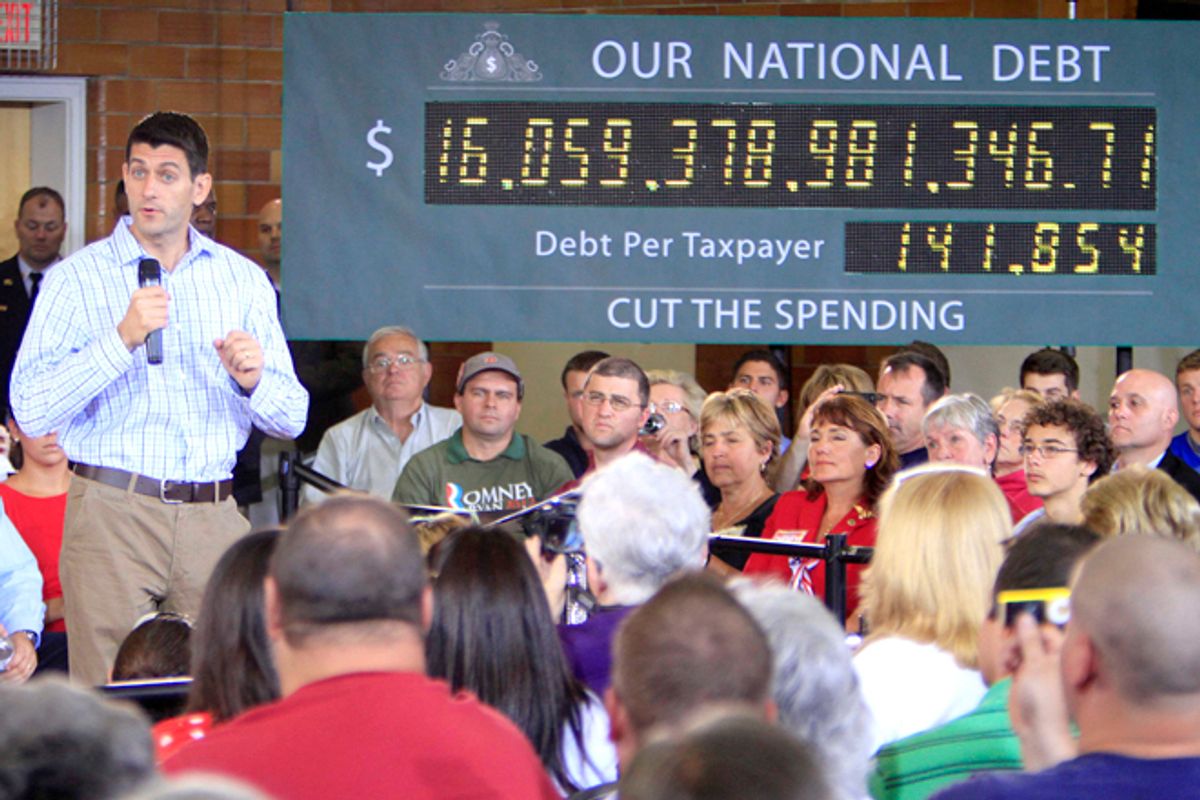 There is almost certain to be a renewed push for cutting the budget regardless of who wins the election. This is a big part of Romney's and the GOP’s agenda. However, President Obama has also indicated a willingness to cut most areas of spending, including Social Security and Medicare, as part of a “Grand Bargain.”

In this context, the decision of a group of corporate CEOs to form a new group, the Campaign to Fix the Debt, to push for a budget deal can be seen as a big deal. This group brings back memories of a 1970s TV ad that featured a middle-aged man wearing a bad toupee pushing totally fake-looking toupees. The narrator assured viewers that no one would recognize that these toupees were not your real hair saying, “I wouldn’t lie to you, I’m the president of the company.”

It’s hard not to think of this ad when listening to the agenda being pushed by the Campaign to Fix the Debt. This is yet another project supported by Wall Street investment banker Peter Peterson. For the last two decades Peterson has used his fortune to bankroll a number of organizations that were ostensibly pushing fiscal responsibility, but always had the same punch line: cut Social Security and Medicare.

This latest gambit has the interesting twist that it involves 80 CEOs of major companies who are lending their time and good names to the effort to put in place a large-scale deficit reduction package. The plotline is that the 80 CEOs who are demanding that Congress act on the debt are supposed to be acting out of civic commitment. We are supposed to be impressed that these busy and important people are taking their time to focus on the country’s financial situation. They hope this will convince us that the debt is really an important problem.

This brings back the Hair Club for Men commercial, because like the president of the company, the 80 CEOs have lots of reason to lie to you. First and foremost these CEOs are all extremely wealthy people. Most of them are in the richest 1 percent of the 1 percent. They are looking at annual paychecks in the tens of millions and many have accumulated hundreds of millions or even billions of dollars from their past work, investments and/or inheritances.

The outcome of the budget battles could cost many of them millions of even tens of millions of dollars a year in higher taxes. Suppose the top marginal tax rate goes from 35.0 percent to 39.6 percent, as is scheduled under current law. If you’re a moderately successful CEO and pocket $15 million a year for your work, this change would add over $600,000 a year to your tax bill.

But wait, there’s more. Suppose that you had $200 million invested in the stock market. Currently dividends are given special treatment so that the maximum tax rate is 15 percent. This special treatment expires at the end of the year so the tax rate would rise to the 39.6 percent rate for ordinary income. If this $200 million in stock paid $5 million a year in dividends, our CEOs would see their tax on this money increase by more than $1.2 million.

This hypothetical CEO is already looking at an increase in his tax bill of $1.8 million, but there is even more to the story. The tax rate on capital gains is scheduled to rise from 15 percent to 20 percent. This means that if the stock market goes up by 10 percent and the CEO has gains of $20 million, the higher tax rate will cost him another $1 million.

This brings us to a grand total of $2.8 million a year in higher taxes and we haven’t even considered the story with corporate taxes. That should be good reason to give us a phony story on the deficit.

Of course the real story of the deficit is very simple. We have large deficits at present because the collapse of the housing bubble crashed the economy. That’s it.

In 2007, the last year before the downturn, the deficit was a modest 1.3 percent of GDP. We can run deficits of this magnitude forever. The debt to GDP ratio was actually falling. The Congressional Budget Office projected that the deficit would remain modest and actually turn to a surplus when the Bush tax cuts expired in 2011.

This all changed when the economic downturn sent tax revenues plummeting and caused a sharp jump in spending on unemployment insurance and other programs designed to counteract the downturn. But the basic story is simple and straightforward: The large deficits are because the economy collapsed, not because of huge tax cuts or runaway spending.

There is a longer-term deficit problem but this is entirely a problem due to the projected explosion of healthcare costs. Interestingly, the data doesn’t seem to be cooperating with this story either. Healthcare spending grew at just a 0.5 percent annual rate in the most recent quarter. Its growth rate has been far below projections since the start of the downturn.

If healthcare costs continue anywhere near their recent path, our deficit fighters will lose their long-term deficit crisis story. They will be left pushing cuts for Social Security and Medicare that lack any basis in budget realities.