In their first post-hurricane shows, Colbert and Stewart delivered the perfect balance of wit and soul 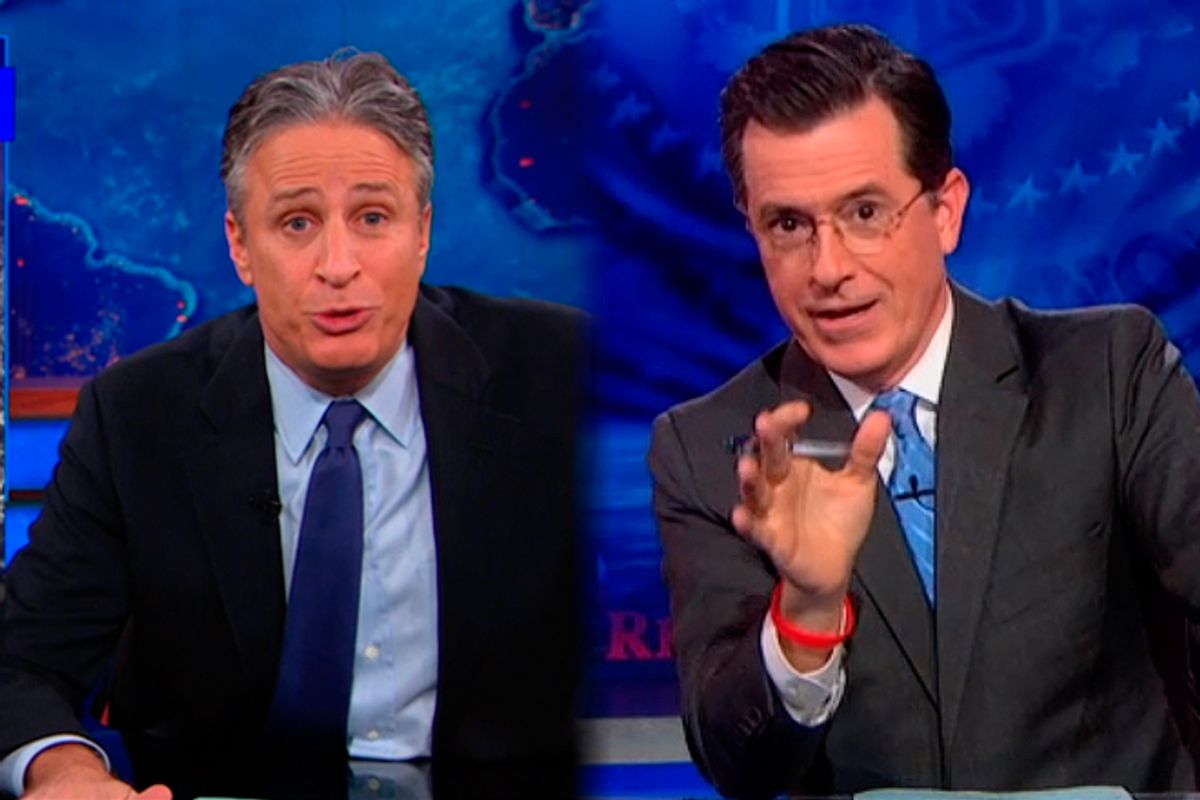 It’s been a crazy week for everyone in the Northeast, and though the late-night talk-show schedule is pretty near the least of the madness, it’s been a mess anyway. Fallon and Letterman put on audience-less shows, Kimmel canceled and “The Daily Show” and “The Colbert Report” didn’t air Monday or Tuesday. The latter shows both returned last night, with episodes that had to achieve a precarious balance: respectful yet hilarious, cutting but not too soon, politically astute at a moment when “politicizing things” is even more of a dirty word than usual. Both shows made it look easy.

Jon Stewart kicked off his show by saying “Welcome back. Wow. Do you ever have one of those days where everything you loved as a child was underwater?” He followed this up with a bit comparing the powerless and power-having parts of Manhattan: Two correspondents sold rats and wielded machetes in lower Manhattan while uptown, John Oliver complained about the run on a particular flavor of frozen yogurt. Having eased in with a segment that was not purely political, Stewart got down to business, with “The Daily Show Tribute to Institutional Competence,” or what happens when politicians stop being partisan and start getting real. Stewart commended Bloomberg, Obama and especially Chris Christie for their work this week. Christie was the highlight, with Stewart showing a clip of Christie campaigning against Obama a few weeks ago — "The president doesn’t know how to lead, he’s like the guy searching for the light switch," says Christie — and then the governor commending the president yesterday on cable news. “I guess he found the fucking light switch, huh,” Stewart said.  The hurricane-focused portion of “The Daily Show” ended soon after, with Stewart beginning, “On a personal not, I live in downtown Manhattan,” only to get the giggles as Samantha Bee, playing his sign language interpreter, mimed the universal jerk-off sign and shut down any emotionalism.

“The Colbert Report” was willing to tug heartstrings. The strange magic of Colbert’s persona is that even as pompous, hubristic and faux-idiotic as it is, it is also hugely charismatic and authoritative. Colbert may be playing a kind of buffoon, but he is a buffoon who is a joy to watch, and not only because with his every word he slices and dices the political views he is pretending to espouse. Colbert, the character, oddly, has gravitas — and only some of it is a joke about self-obsessed wind bags' unending faith in their own importance. Colbert usually puts his clout to ridiculous, fantastic uses — like Colbert telling Donald Trump to lick his balls — but this same clout empowers Colbert to look right at the camera and make an earnest plea, as he did last night. Strong, heartfelt emotions are a part of that character’s repertoire. Just because they're usually insincere doesn't mean they are always insincere. In the episode’s opening few minutes, Colbert basically played it straight, ending with a direct appeal: “It is an unimaginable tragedy. For those watching this show tonight, I urge you to go to redcross.org. and see what you can do. Spoiler alert: It’s money.”

He then, like Stewart, dove into politics. The most dazzling bit of the night, on either show, was Colbert's exploration of the politics of hurricanes. “Hurricanes have a well-known liberal bias,” he explained, citing Katrina, Isaac and Sandy. “Just when Obama needs a boost, who shows up in a gender-ambiguous weather system, a category-5 bicur-icane.” He followed that up with the line of the night: “The hurricane agenda is to make the federal government look necessary.”