Fox and the new jobs trutherism

Fox News insists that a good jobs report is bad. Of course it does 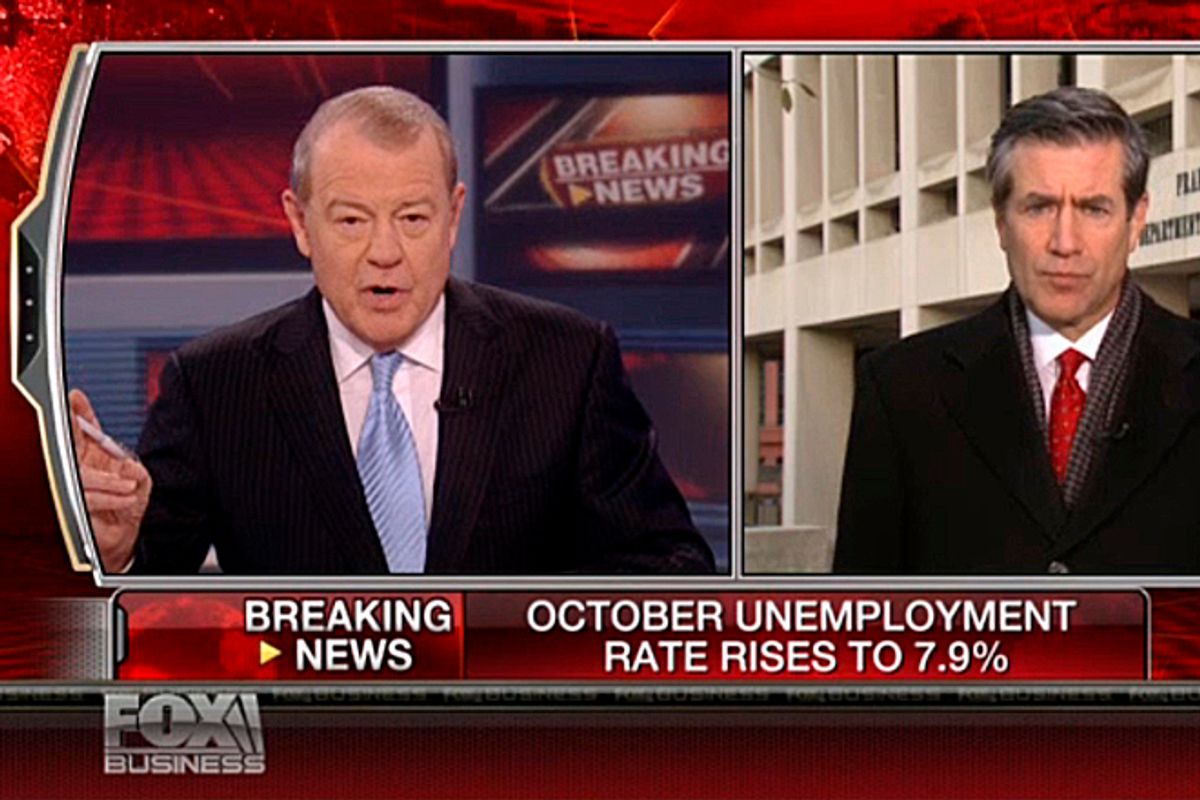 Forget “cooking the books.” Fox has a found a more direct way to turn news of job growth into a bad thing for President Obama -- just insist it’s not true.

Last month, after a strong jobs report showed the unemployment rate dropping below 8 percent, conservatives at Fox and beyond convinced themselves that the Bureau of Labor Statistics was pulling some funny business to boost the president a month before the election. This morning, BLS released its new monthly report, and it’s more good news: The economy added 171,000 jobs in October, almost 50,000 more than economists expected, and the previous two months’ reports were revised upward to the tune of 84,000 additional jobs.

So did the patriots at Fox News let out a whoop that more Americans had found jobs last month? Nope. In the first hour after the report came out, they found every possible way to spin the news as bad for Obama and good for Mitt Romney. When announcing the numbers, the Fox personalities always focused not on the number of new jobs added, but the fact that the unemployment rate ticked up from 7.8 to 7.9 percent, mentioning the 171,000 new jobs almost as an afterthought.

But as Andrew Leonard explains, the fact that the rate ticked up slightly is in all likelihood a positive sign -- the number of people seeking jobs jumped upward, suggesting that more people are confident enough now to start looking for work again.

Don't try telling that to Fox host Martha MacCallum, who rolled out a chart showing that the jobless rate has only gone up and stayed high under Obama, with the 2 percent drop under the president’s four years almost imperceptible. Of course, the chart begins in December 2007, before the economy imploded, when unemployment was at 5 percent, so how could it look otherwise? Next, MacCallum insisted that the unemployment rate everyone is talking about is not the “real unemployment rate.” The “real” rate, she and co-host Bill Hemmer said, is the wider so-called U-6 number, which includes people who have jobs, but only part-time and are looking for full-time employment. That rate is indeed useful, and some economists do think it's a more accurate measure of joblessness. But it's not the one that most people look at. On the other hand,  it is a much bigger absolute number, 14.6 percent, thus making it a better story for Fox.

But for the full-bore spin job, MacCallum and Hemmer brought in Stuart Varney, the Fox Business analyst, who explained that today's numbers paint “a dismal picture of the employment picture in America today.” Then he got right down to what’s really important: “It should play in favor of Governor Romney,” Varney declared of the jobs report.

Remember, this is the same Varney who,  just one month ago, led the jobs-truther charge. “There is widespread mistrust of this report and these numbers,” he told Hemmer and MacCallum back then. “Oh, how convenient that the rate drops below 8 percent for the first time in 43 months five weeks before an election,” he added. Today, however, Varney seems to have none of those same concerns.

So what did actual economists think of the report? Speaking on MSNBC, Mark Zandi, the often-quoted economist who advised John McCain’s presidential campaign, called the jobs report "good, very good." "When you add it all up it feels really good,” he added. Justin Wolfers, the Wharton economist with a beloved Twitter feed, reacted thusly: “BOOM!” “There are 3 data sources in a jobs report: Payrolls, revisions, household survey. Payrolls good, revisions great, household employment fab,” he explained in more wonky terms. Betsy Stevenson, the former chief economist at the Labor Department, added, “a steady, slow recovery continues.”

But it appears that the GOP presidential nominee is taking his cues from Fox. The report is a "sad reminder that the economy is at a virtual standstill,” Romney said in reaction to the report.