Pick of the week: Disaster on the Atlantic coast!

Pick of the week: "The Bay," Barry Levinson's creepy found-footage disaster movie, gets a bizarre boost from Sandy 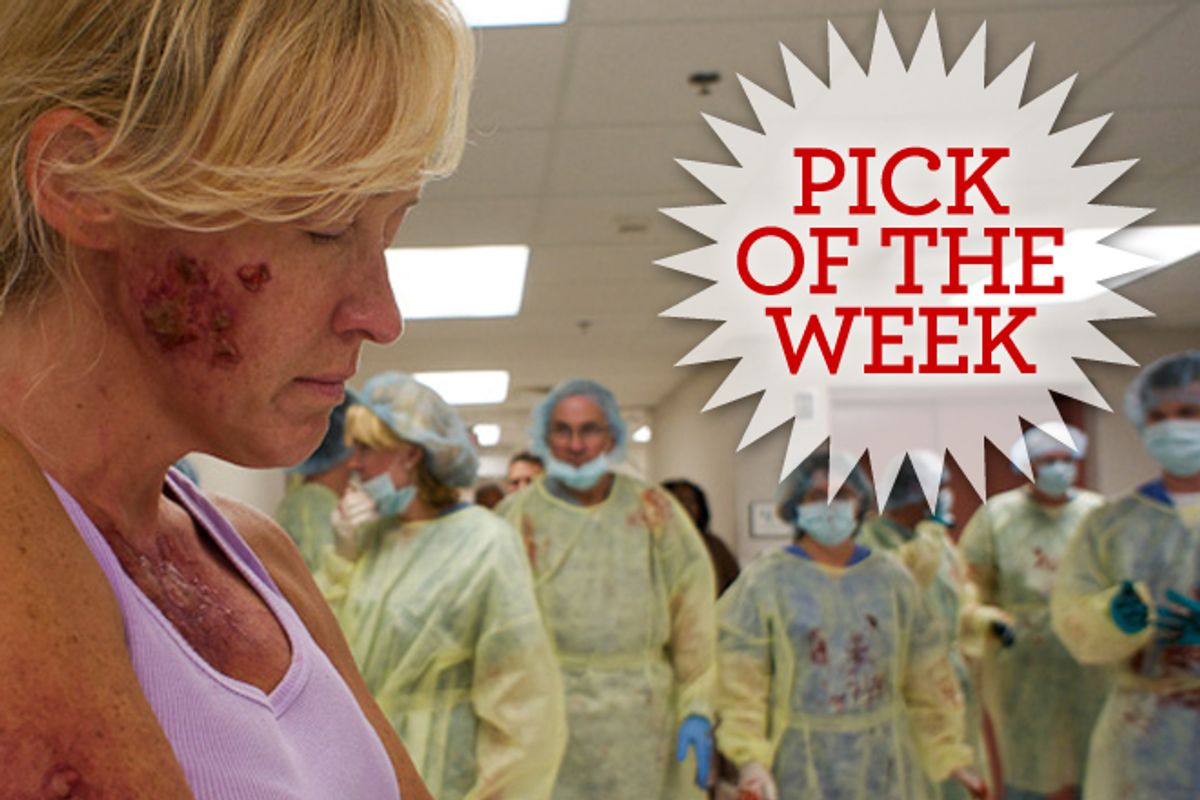 If you’ve spent much of the last week indoors, possibly without power or with standing water in your house, you may not want or need to see “The Bay,” Barry Levinson’s crude but highly unsettling found-footage disaster movie about a mysterious water-borne illness that devastates a small town’s Fourth of July celebration. One thing is for sure: This movie’s release this week is an uncanny example of either good or bad timing. While “The Bay” has nothing to do with weather or climate, at least not directly, it’s a claustrophobic media narrative about the Atlantic seaboard under attack, and also aspires to be an ecological fable about the dire “new normal” we have inflicted on our environment.

For Levinson, a 70-year-old veteran of both independent and Hollywood films who made the classic coming-of-age comedy "Diner" and won an Oscar in 1989 for directing Tom Cruise and Dustin Hoffman in "Rain Man,” “The Bay” marks a startling new direction, even an oddly inspiring one. It’s probably fair to say that this movie resembles a cross between “Cloverfield” and David Cronenberg’s early parasite horror flick “Shivers” (aka “They Came From Within”), with an overlay of eco-documentary. But Levinson says the combination emerged organically, and you can’t find a hint of condescension to the audience here. (Buzz for “The Bay” at recent film festivals has been sensational, especially among younger viewers, and you can’t say that about any Levinson movie of the last 15 to 20 years.) He actually began with the idea of making a documentary about the Chesapeake Bay, whose once-bounteous crab and oyster fisheries have been devastated by agricultural and sewage pollution, climate change and invasive species. (As everyone who’s seen “Diner” knows, Levinson is a proud native of nearby Baltimore.)

But numerous documentaries about the Chesapeake and other stricken bodies of water have been made during the past decade’s onslaught of eco-movies, and such films tend only to reach people who are already well informed and care about the issue. Eventually – and with the help of “Paranormal Activity” creator Oren Peli, who co-produced – Levinson moved toward the idea of a fictional story, one that would be cheap to make, would grab people’s attention and would illustrate the ideas he wanted to convey. And so we get a creepy-crawly monster movie with a high body count, plenty of low-grade gruesome effects and a budget of about $2 million, shot on 21 different kinds of digital cameras and cell phones.

Many reviews have revealed central details about what happens in “The Bay,” and while it’s difficult to resist, I won’t go there. (If people want to know more in the comments, I will oblige.) But here’s the key thing to understand: While the story of what happens during the disastrous 2009 Fourth of July celebration in Claridge, Md., involves an implausible mutation straight out of 1950s radiation-crazed science fiction, the organism implicated in the disaster is 100 percent real, and most of the scientific background is authentic also. (Including a photograph you’ll see in the film that you’ll swear is a fake, but apparently isn’t.) Are Levinson and screenwriter Michael Wallach seriously suggesting that dumping tons of steroid-laced chicken excrement into the Chesapeake will produce a killer new species? Of course not, but they are suggesting that it’s unlikely to have good effects on anyone or anything, and that amid the complacent, overwhelmed daze of American life, we’re often taken by surprise when our actions lead to serious consequences.

There’s an overly ornate present-tense framing device surrounding the main action in “The Bay”: Donna Thompson (Kether Donohue), who was a perky summer intern for the local TV station during the 2009 disaster, is now coming forward, via some WikiLeaks-style outfit, to tell her story and piece together the fragments of surviving video evidence. Even though this seems forced at times, as if you can feel the screenwriter’s thumb on the scale, it worked pretty well for me. On camera in 2009, interviewing Miss Crustacean on the Claridge waterfront – and if you think that’s implausible, you haven’t seen enough small-town beauty pageants — Donna’s a bubbly girl with a bob haircut and semi-sexy tight slacks. In 2012, during a Skype conversation with an off-screen investigator, she’s older and wiser, a scruffy, disillusioned activist type with unstyled hair and no makeup.

When that summer day in Claridge starts to go wrong, it looks at first, to Donna and everybody else, like a series of odd but unrelated events: Kids at a pool party contract a strange, rapidly spreading rash of lesions and blisters; contestants at the annual crab-eating contest start to vomit profusely; two apparent murder victims – the town’s first for several years – show up in different neighborhoods. What struck me most about “The Bay” was that Levinson clearly has an appetite for the blend of lurid, comic and grotesque elements that always makes for the best horror. I’m not surprised he can build creepy atmosphere in a point-of-view police video, or develop drama from the story of a heroic E.R. doctor (Stephen Kunken) trying to understand and control this mysterious outbreak. But this movie’s also effective as a skin-crawling, zombie-apocalypse thrill ride with a truly disgusting antagonist that may leave you jittery for days afterward.

With its bewildering cast of panicked characters, all wielding their own camcorders or cellphones, “The Bay” has a purposefully fragmented dramatic structure. Still, Levinson returns to a few touchstones to push the story forward. Along with Donna the bewildered TV intern and the noble doctor, we have the town’s shifty-eyed mayor (Frank Deal), who of course knows more than he’s letting on and lies through his teeth; the pair of local cops whose purported murder investigation keeps getting darker and weirder; an affluent young couple who arrive on their yacht late in the evening, with no idea anything is wrong. There’s also a CDC official, seen only on Skype calls with the E.R. doctor, who begins to figure out what’s going on and how bad it is, and a pair of crusading marine biologists (Christopher Denham and Nansi Aluka) who figured out that something was very wrong in Claridge’s waterways several weeks earlier.

How relevant to reality are the scientific and cryptozoological elements of “The Bay”? Maybe no more so than the assurance that comes attached to every horror movie these days that it was “based on real events,” or the accidental resonance between Levinson’s film and the realm of devastation, evacuation, viral rumor-mongering and info-blackout so many of us have inhabited over the past week. Nonetheless, I would argue that the integrity and good intentions of this film shine through, as does its metaphorical significance. Is it, on some level, '70s-style horror schlock dressed up with contemporary gimmicks? Sure, but don’t act like that’s a bad thing! It’s schlock with honor, schlock with a conscience, schlock that speaks to the way we live now.

“The Bay” opens in theaters this week, and is also available on demand from cable and satellite providers, Amazon, iTunes and other digital outlets.