Misogyny will cost the GOP 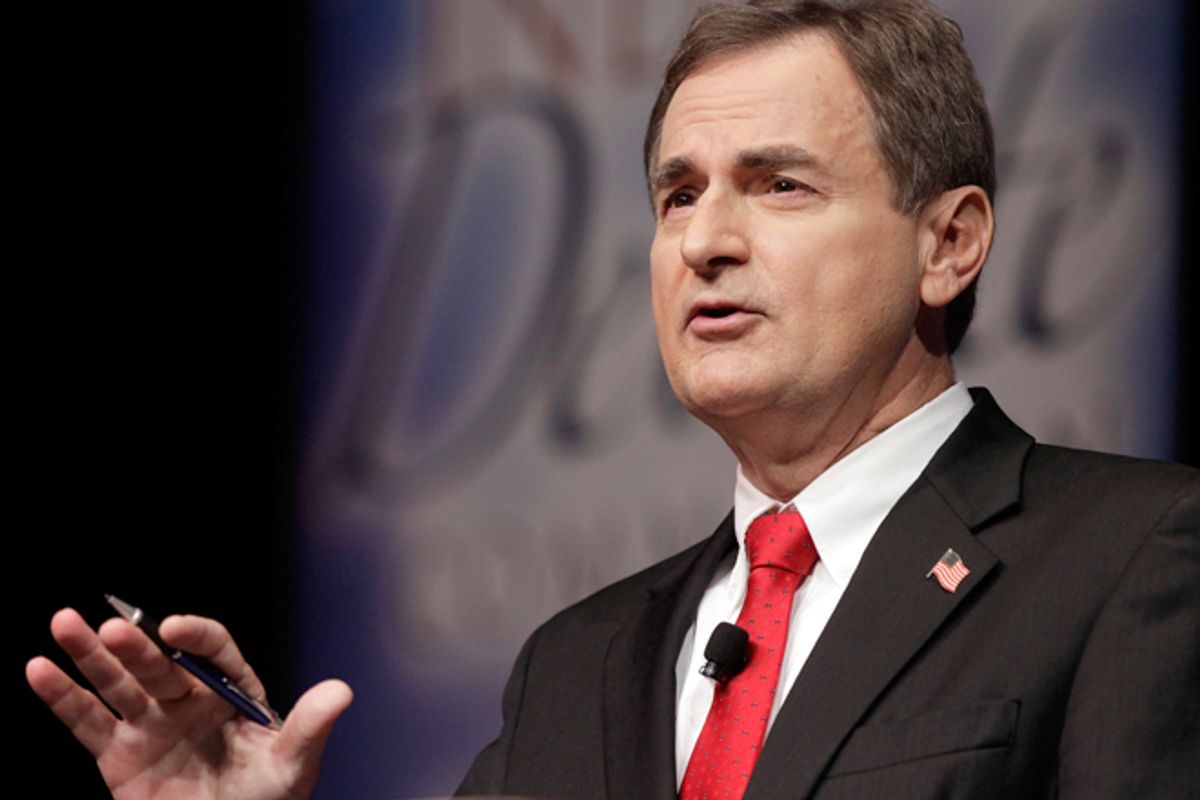 What if misogyny ends up costing Republicans the Senate? Judging by the polls in the final days before the election, this is not a crazy proposition -- especially if "gaffes" on abortion, rape and contraception are equated by the electorate with extremism, repelling even ideologically sympathetic voters.

Just look at Indiana, a state that is choosing between two "pro-life" candidates, one of whom is a Democrat who has voted for House Republicans' most restrictive legislation on reproductive rights. Still, Joe Donnelly managed to avoid doing what Richard Mourdock did -- getting famous for talking insensitively about rape. They've been tied or within inches of each other for weeks, but as of today, the first post-rape-comment poll, Mourdock is down 11 points. Meanwhile, Mourdock's rape-talking fellow traveler in Missouri, Senate candidate Todd Akin, is locked in a race that was never supposed to be competitive, and a cash infusion may come too late to save him. And in Connecticut and Massachusetts, both abortion and contraception have been used to pummel relatively moderate Republicans with the ever-rightward agenda of the national party, and for that reason and more, it's looking like Democrats will prevail.

This is about more than the so-called gender gap, though women do tend to vote disproportionately to our share in the population and historically favor Democrats. And it's about more than "pro-life" and "pro-choice," where, at least as far as those fuzzy words go, the former has a slight edge in polling. When abortion conversations turn to rape, exceptions for which are broadly, if inconsistently, supported by voters, they also suddenly become about a broader callousness and indifference to suffering, one that jibes with messaging about slashing Medicare and Medicaid. Voters drifting away from Mourdock would probably never use the word "misogyny," but as I've said, as the Republican agenda on sex and reproduction gets explained in full, we're hearing very little about compassion for fetal life and a lot about women having sex.

Pro-choice activists have been saying this for years, but didn't get much credence until elected Republicans gave a larger platform for marginal and largely discredited views -- rape victims can't get pregnant (Akin); exceptions to save a woman's life are never needed (Rep. Joe Walsh); consensual sex, and getting pregnant from it, is as shameful as rape (GOP Senate candidate Tom Smith, who hasn't been able to close the deal in Pennsylvania). The same goes for defunding Planned Parenthood and repealing Obamacare, or at the very least getting rid of the birth control coverage in it -- these days, virtually uncontested across Republicans in office or running for it. That may work well in a House race, but it's proving a tougher sell statewide -- and, judging by Romney's ads soft-pedaling his stances on abortion and contraception, nationally as well.

If you want to know where this all came from or where it's going, check out Emily Bazelon's profile of the Americans United for Life president in the New York  Times magazine. AUL has been as influential as any group in crafting the state-level abortion restrictions and rhetoric around them, taking the murky anti-choice rhetoric and mainstreaming it in a palatable and reasonable-sounding way. Yoest "believes that embryos have legal rights and opposes birth control, like the IUD, that she thinks 'has life-ending properties.'" (She can think that, but it doesn't make it medically accurate.) She refuses to discuss a study showing that the abortion rate drops dramatically when you make long-acting reversible birth control -- like the IUD -- free to women who want it, mimicking Obamacare's full coverage under insurance. And yet she knows that when you talk about birth control and abortion as connected to women's reproductive and sexual autonomy, the anti-choice side loses. She said as much on PBS, Bazelon notes: "“It’s really a red herring that the abortion lobby likes to bring up by conflating abortion and birth control ... Because that would be, frankly, carrying water for the other side to allow them to redefine the issue in that way.”

For years, in particular with the "Partial Birth Abortion" bans, anti-choice activists successfully seized the narrative to claim that Democrats were extreme on abortion, filling the airwaves with images of grisly later procedures. They've tried, mostly in vain, to claim that President Obama is also extreme because of a vote on a similarly politically crafted legislation in the Illinois Senate, with very little interest and lots of disdain from fact checkers. But maintaining the status quo, which is what today's Democrats are basically promising, hasn't been particularly scary to voters this cycle. And a few years of the public discourse on these issues veering rightward has led us here -- to a place where voters are recoiling from all this talk of rape victims and denying contraception. Whether paying with the Senate and, maybe, the presidency will be enough to change anything on this front is another story.