A taxonomy of Mitt Romney's lies 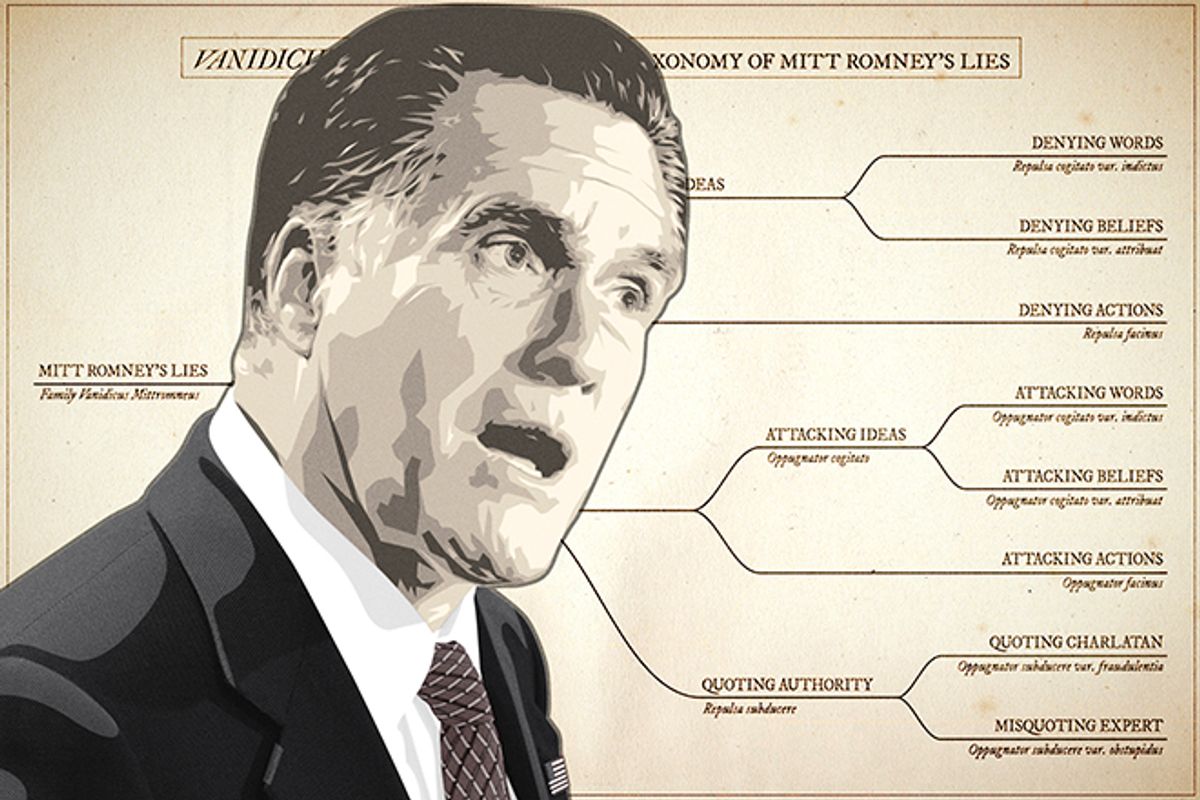 "Jeep — now owned by the Italians — is thinking of moving all production to China."

"The president said he’d cut the deficit in half. Unfortunately, he doubled it."

These are the types of lies that come to mind for most when pondering Vanidicus Mittromneus – and with good reason. They are, indeed, outstanding specimens, but they merely hint at the rich variety to be explored. What follows is a rough breakdown of the genera and species, and we encourage you to seek out this vast taxonomic family in the wild. A perfect microcosm of the entire family:  diverse, strategic and extremely difficult to kill. Inbreeding is common in this species, given Romney's habit of misquoting his own lies.

Note the recursive structure in this example; lies within lies:
"I've spoken about health care from the day we passed it in – in Massachusetts and people said, is this something that you'd apply at the federal level? And I said no."

Categorizing this species is a unique challenge, as Romney's core beliefs are nearly impossible to identify, let alone monitor over any significant time-frame.

An unusually clear-cut example:
“I’m concerned about the poor in this country."

These were among the first to spring up in the campaign – not surprisingly, as Romney's public record is an uncommonly fertile breeding ground for lies.

A characteristic attempt to make Romney's past more palatable:
"In the business I had, we invested in over 100 different businesses and net-net, taking out the ones where we lost jobs and those that we added, those businesses have now added over 100,000 jobs."

In a harsh landscape of non-stop scrutiny by fact-checking predators, C. indictus has nonetheless thrived, thanks in large part to its ability to entirely regenerate itself after devastating attacks.

The following specimen has sprung back to life countless times:
"This is a president who began his presidency by apologizing for America."

Lies about other candidates' core beliefs have historically been relatively modest in size. Mitt Romney's lies about Obama represent what we refer to as an "evolutionary event."

A typically ferocious specimen:
"The president's focused on taking away from those that have the least."

This species has multiplied so rapidly that it faces an overpopulation crisis. The resulting competition has sped up the rate of evolution exponentially. We even witnessed a specimen mutating so rapidly that the end of the lie contradicted an argument posited earlier in the same sentence.

Competition is so fierce that only the most extraordinary in this species attract attention:
"It has been shown time and again that the president's effort to take work requirement out of welfare is a calculated move, the same thing he did with regards to Food Stamps."

One of only two documented species that echo the words of an outside source (see also var. obstupidus, below). Fraudulentia is adept at mimicking words and sentences, but invariably chooses sources at the very bottom of the food chain.

This charge would be devastating to Obama had it not been lifted from a partisan hack:
"There's been a study done recently that shows that with all the spending he's planning and of all the interest on the debt that's associated with all that spending that he's going to have to raise taxes on middle-income Americans again."

These lies select impeccable sources to quote. Unfortunately for Romney, these are the sources most likely to contradict his campaign's core beliefs [sic]. More often than not, a swift rebuttal corrects the distortions Romney has been forced to employ.

This example elicited a fatal counterattack from the quoted source, noted author Jared Diamond:
"I read a number of books on the topic. One, that is widely acclaimed, is by someone named Jared Diamond called ‘Guns, Germs and Steel,’ which basically says the physical characteristics of the land account for the differences in the success of the people that live there."

As of this writing, there are literally dozens of found specimens that are simply too aberrant to be categorized within our taxonomy.

Here is just one example of a lie too peculiar to classify:
"We are the only people on the earth that put our hand over our heart during the playing of the national anthem."

There is much work still to be done. We are only just beginning to understand the high-frequency communications known commonly as "dog-whistles," an adaptation found in most species of Mittromneus. We suspect that there are entirely new species awaiting our discovery.

In closing, we would like to stress that we remain officially neutral with regards to the upcoming election. That said, a Romney win would surely set us back many years in our studies with a massive influx of new lies. And we are fairly certain that our grant would be terminated.