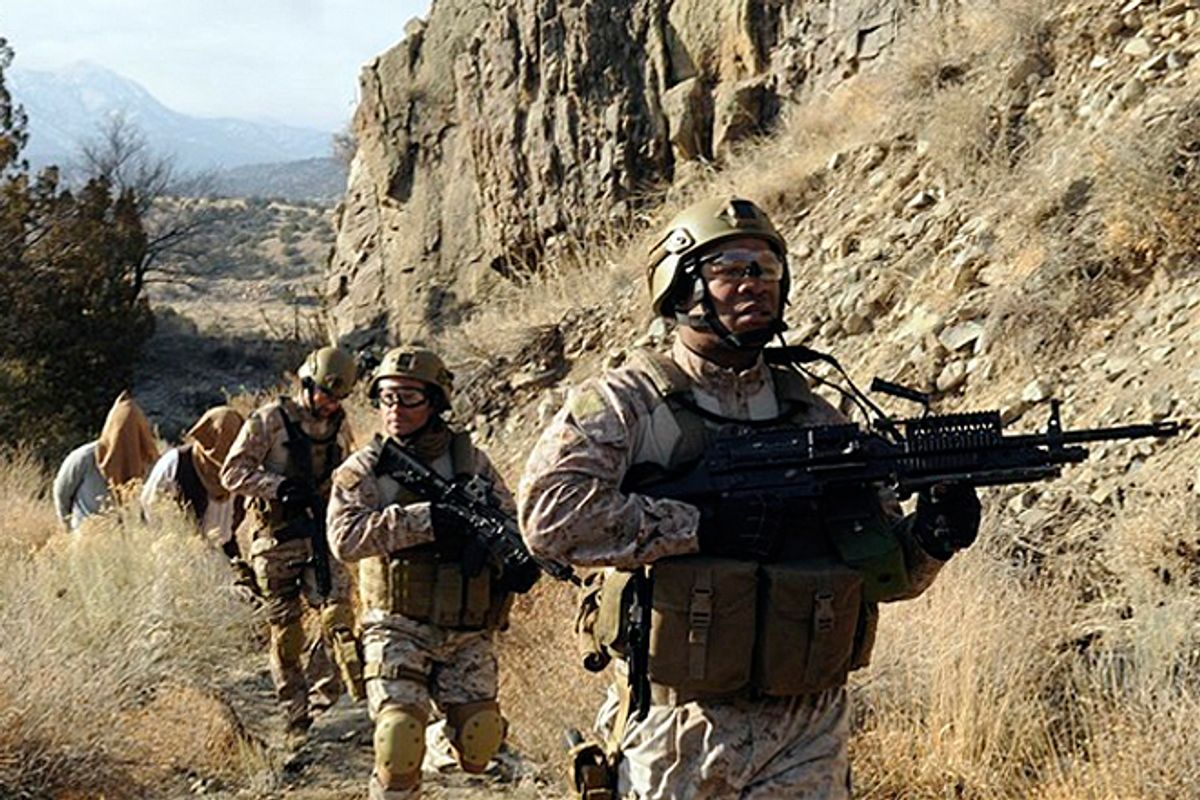 “SEAL Team Six,” a shallow TV movie about the raid to kill Osama Bin Laden, stars a bevy of beefcakes in Navy SEAL costumes -- and Barack Obama. Real audio and video footage of the president has been threaded into a fictional, melodramatic account of the attack on Abbottabad. Couple this with the film’s air date, tonight on National Geographic, just three days before the election, and “SEAL Team Six” has been accused of being Democratic propaganda, burnishing Obama's accomplishments, though its creators  — director John Stockwell and producers the Weinstein brothers — have said they included Obama only to increase verisimilitude. But as either propaganda or realist fiction “SEAL Team Six” is ineffective. It’s on the level of those “The army is just like a character-building video game!” enlistment ads you see before movies, simple-minded and, at most, superficially rousing. Barack Obama probably isn't wild about help this dim.

“SEAL Team Six” opens in 2002 at Guantánamo Bay, where two men we’ve never seen, one a prisoner and one an interrogator, are having a chat. The interrogator explains he’s going to send the prisoner off to the Saudis where they are going to peel off all of his skin unless he can help. The prisoner gives up the name of Osama Bin Laden’s courier. We never see either of these men again, but as the credits play, we see where this information leads: Documents get highlighted as the courier is I.D.-ed and located. By the time the credits are over, ten years have passed — ten years in which almost all of the work to find and locate Osama Bin Laden has been done. “SEAL Team Six” goes from the one scene that could appear in an action movie to ... all the other scenes that could appear in an action movie.

By eliding all the boring, non-bullety stuff, “SEAL Team Six” makes time to soapify its SEALs. We are introduced to the squad as they undergo a character-testing trauma, which causes two of its more handsome members — Stunner, the all-American surferboy team leader (Cam Gigadnet of “The OC” and "Twilight”) and Cherry, the grizzled short-tempered redneck (Anson Mount of “Hell on Wheels”) — to dislike each other, paving the way for a whole scene dedicated to one of the most dispassionate fistfights I’ve ever seen. (At the end of the movie, when the mission is over, they fist bump. Resolution.)

The two guys, along with their colleagues — who include “Six Feet Under’s” Freddy Rodriguez as Xzibit, “Prison Break’s” Robert Knepper, who will just always be creepy, even when playing a hero — train, shoot things, have meaningful Skype chats with their families back home, joke around and shoot more things. It all feels like a lame simulacra of other, better, grittier war movies from “Generation Kill” to “Black Hawk Down.”

Cherry and Stunner are joined by CIA threat analyst Vivian Hollins — Kathleen Robinson of “Boss” and “90210” wearing hipster glasses so you don’t notice how pretty she is — in doing direct-to-the camera interviews. (“SEAL Team Six” is a member of the “mockumentary but, like, serious” sub-genre.) These segments are supposed to further humanize and dramatize the characters, but it’s difficult when the dialogue is as clichéd as “In this world you don’t get to live free without working for it, you gotta earn it every day. And that day we did.”

Hollins, who has been doing the years and years of not that sexy pencil-pushing the film largely elides, is a poor man’s Carrie Mathison. She’s outspoken and obsessive and even compares hunting Bin Laden via endless surveillance to having an “affair.” But unlike Carrie, she’s only got moments of screen time, and so is more of the outline of a driven analyst than a fleshed out one. In one scene, her colleague (“American Pie’s” Eddie Kaye Thomas, and yes, there is almost no one in this movie you won’t recognize from somewhere else) asks if she wants a syringe of espresso. She immediate has one of those “That’s it, we’ll use a syringe!” eureka moments Dr. House is always having — except we, in the audience, didn’t even know Vivian has a particular problem she was trying to solve until after the fact. (It was how to get access to the Bin Laden compound, and the answer was a vaccination drive.)

The movie ends with President Obama’s real statements — which we've heard throughout — intercut over the fictional SEALs getting applauded as they walk back onto the base. “It was a good day to be a SEAL, it was a good day to be an American,” Cherry intones. The screen goes black, some dunh-dunh-dunh music comes on, and then there's a dedication to America's Armed Forces and Intelligence communities. Anyone with any actual intelligence won't be letting this movie influence how they vote.