There were no political cameos in the weekend before the election, but the "SNL" host struck exactly the right tone 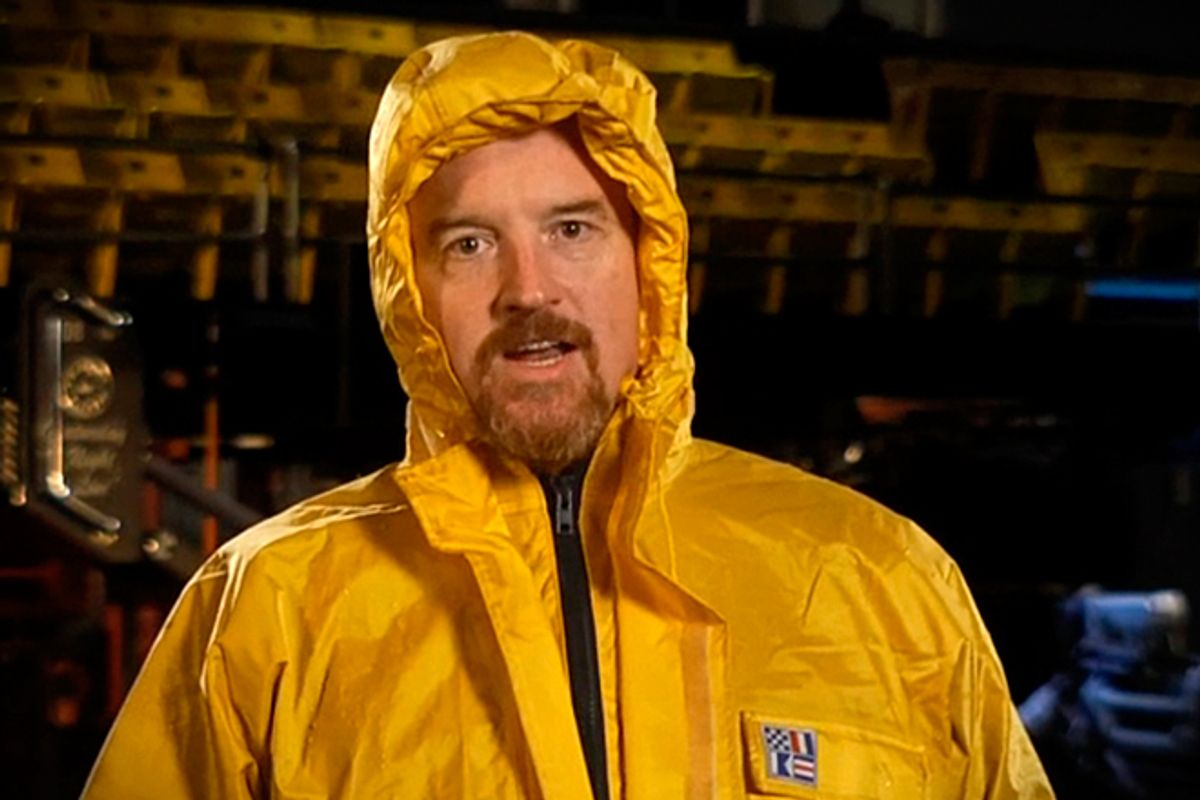 It's the big weekend before Election Day, which for "Saturday Night Live" often involves a surprise political cameo — a final appeal for a candidate to voters to show us how funny and charming he or she can be. Four years ago, Sarah Palin dropped by Studio 8H, facing off with Tina Fey's fake Sarah Palin, and later, on "Weekend Update," she bopped merrily along as she was getting skewered by a very pregnant rapmaster, Amy Poehler. Obviously, it didn't help, but it didn't hurt her either.

There were no surprise guests on this edition of "SNL:" not Mitt, nor Paul. No Barry or Joe. Not even Chris Christie or Mike Bloomberg. This was Sandy's week, and just as the hurricane gave us a kind of reprieve from tedious 24-7 candidate-stumping coverage, so too did "SNL" keep it a lot lighter on political fare than you'd expect. This isn't to say the episode ignored the fact of Tuesday; it just didn't have that special edition feeling. It relied instead on its wonderfully droll host, Louis C.K., and Sandy, to set the tone.

Which was the right tone to strike, especially if you had the opportunity to read Louis C.K.'s eloquent, heartfelt e-mail to fans that started circulating on the web hours before the show went live. In it, this week's host described walking the dark streets of Manhattan during the week of production during the hurricane, and, expressing his awe of the devotion of the cast and crew. "These folks are working so hard this week," Louis C.K. writes. "There are kids in the studio every day, because members of the crew and staff had to bring them to work. Many people are sharing lodging. Everyone is tired … I feel really lucky to be sharing this time with these particular good folks here at "SNL."" The guy is an über-mensch. How many hosts would have done that: make sure that viewers know and appreciate what went into producing an episode during a hurricane? And expressing his gratitude to all the people who came to work every day?

The efforts were not in vain. Thanks to Louis C.K., and indeed the whole cast, this was this season's funniest and most poignant episode. Though the political jokes were few, they were well-chosen, even if they seemed predictable — they were jokes you wanted to hear and laugh along with, even the usually dreadful cold open. I'm sure few were surprised when Fred Armisen appeared as Mayor Bloomberg, with his ASL interpreter, Lydia Callas, played by new cast member Cecily Strong, by his side, gesticulating wildly in the sign-language equivalent of @ElBloombito's Spanglish. But it was still funny. Especially when Lydia was upstaged by Chris Christie's  (Bobby Moynihan) "interpreter" (Nasim Pedrad) — Jersey style ASL, as it turns out, is hyperaggressive and involves a lot of bird-flipping, chin flicking and swinging arms — who helped translate the Christie quandary: He loves his new best friend Barack, who is a real leader and great in a crisis, as it turns out. But he has to vote for Romney And he hates having to vote for Romney. The skit ends on perhaps the funniest note of all: Bloomberg's special message to the Latino community of New York (spoken in that awful Bloombergian Spanish dialect), an apology on behalf of all irritably behaved white New Yorkers — please understand they're devastated by their lack of access to Internet and cable, rendering "Homeland" inaccessible. So, por favor, be patient ...

Of course we'd be sorely disappointed if they missed an opportunity to do their "Fox and Friends" skit: Steve Doocy (Taram Killan), Gretchen Carlson (Vanessa Bayer), Brian Kilmeade (Moynihan) did everything they could to pin the hurricane on Obama. Louis C.K. appeared on the segment as a FEMA worker to offer viewers survival tips, but his advice is falling on the deaf ears of his willfully ignorant hosts who insist that there are sharks and AIDS in the flood waters, and that "the government always makes things worse," imploring viewers to call a small business for help. (Our own film critic, Andrew O'Hehir, spent Tuesday afternoon watching Fox on Tuesday, and was surprised to see that, at least on that day, the news team kept themselves in check.) And in this week of Hurricane Trump, here he is, played by Jason Sudeikis, infuriated that Obama blew off his deadline, but armed with a new exclusive bombshell announcement: "I have it on good authority, from an African national that I met in a Rainforest Café, that Obama is texting top terrorists": Abu Nazir and the Riddler. "If they are fictional characters, release the records!" Trump will pay $1 million to Trump's Kids, which pays inner city kids to throw garbage at Rosie O'Donnell.

On "Weekend Update," Sudeikis appears again, this time as Romney making his final appeal to voters (will this be his final appearance as Romney, should Obama get re-elected?). Seth Meyer finally fishes out the answer to the FEMA question that reporters have been seeking from the candidate all week: "When I said we should get rid of FEMA it was sunny," says Romney. "If there’s anything people should know about Mitt Romney at this point, it’s that nothing i’ve said in the past should be any indication of my positions in the future. If i’m elected president I can promise you one thing: I will promise you everything."

But by far the best segment, certain to go viral if it hasn't by the time this posts, is Louis C.K.'s  genius riff on "Louie," entitled "Lincoln." Directed, written, produced by and starring Louis as the great emancipator, honest Abe nervously sidles up to newly emancipated slaves at the local bar, eager to make black friends (In one exchange, he encounters an irate black man, played by Kenan Thompson, who now, as a free man, shovels horse crap for a living. "I just ..." Lincoln stutters, "I just don't have any black friends." "Hard to be you," says Kenan). He argues with his wife before the fated play about how his presidency grants them access into the theater without tickets. And Lincoln does a stand-up routine: about slave owners ("You know one thing I'm really tired of is, arguing with slave owners about slavery as if they're not just f*&king assholes. That's really hard … I just think that owning a person is not cool, you stupid dick"), his wife ("I'm married now, my wife is crazy, she's literally, historically insane"), and his sense of foreboding ("One thing I'm really sure of is that someone's going to murder me").

So, to Louis C.K. and the SNL cast and crew who put together a solid, laugh-out-loud funny, and thoughtful edition in a week of unprecedented obstacles, I say thank you for your Herculean efforts. It was well worth it.