In the final debate of her campaign, Bachmann defends her witch hunt 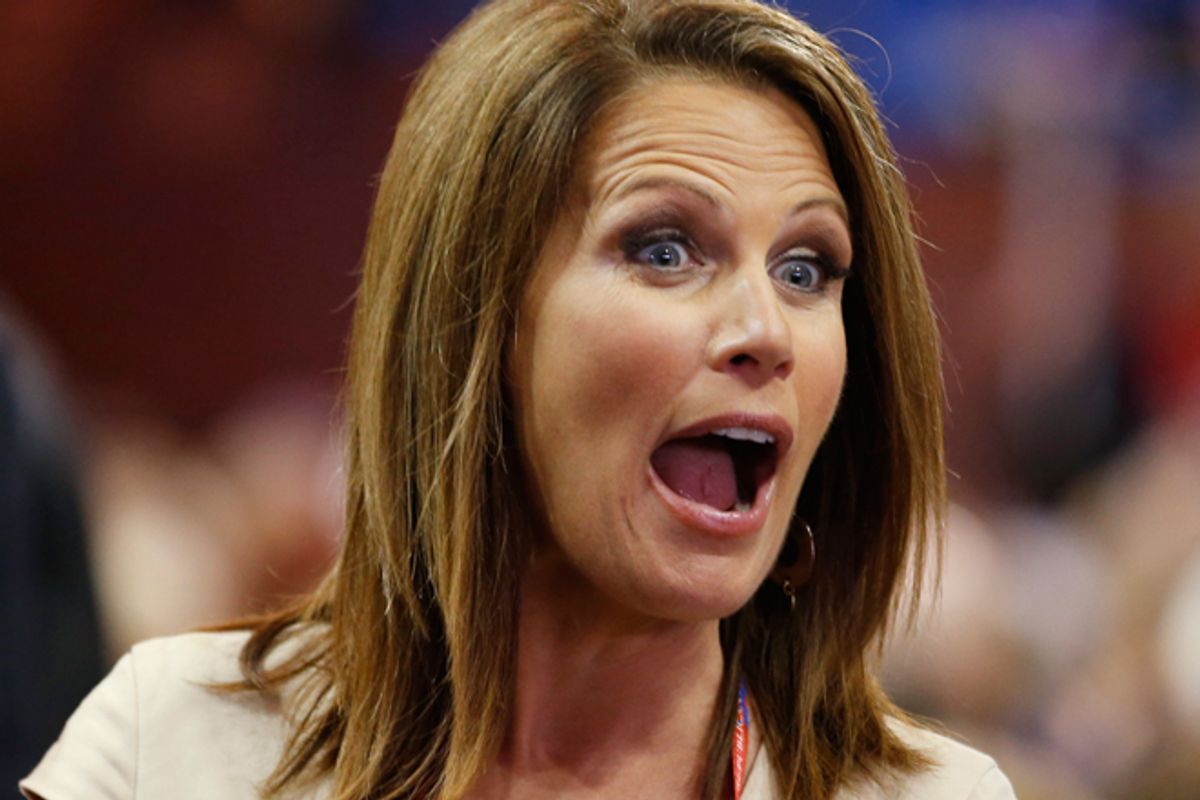 Locked in the toughest fight of her congressional career, Minnesota Republican Rep. Michele Bachmann defended her witch hunt against alleged Muslim Brotherhood infiltrators in the federal government last night during the final debate against her Democratic challenger, Jim Graves. “I certainly do stand by those letters,” Bachmann said of the five letters she sent to the inspectors general of various security agencies warning that they may have been infiltrated by Muslim Brotherhood agents.

“The events in Benghazi have proved that the United States remains under attack, both in the Middle East, and here in the United States,” she continued last night. When the moderator noted that there’s no proof that the Muslim Brotherhood was involved in the Sept. 11 attacks on U.S. diplomats in the Libyan city, Bachmann replied that “we are only just beginning” to investigate and suggested that all radical Islamists groups are tied to the Brotherhood.

Bachmann, in her letters, targeted several people by name, including Huma Abedin, a top aide to Secretary of State Hillary Clinton. Abedin is widely liked by leaders in both parties in Washington, so Bachmann’s suggestion that she’s a terrorist sparked a backlash. “These allegations about Huma, and the report from which they are drawn, are nothing less than an unwarranted and unfounded attack on an honorable citizen, a dedicated American, and a loyal public servant,” Sen. John McCain said on the Senate floor in July. Republican Sens. Marco Rubio of Florida and Lindsey Graham of South Carolina, along with House Speaker John Boehner, and even Bachmann’s former campaign manager, all condemned her publicly.

But when asked about McCain’s criticism last night, Bachmann suggested that she has secret information backing her up. “I sit on the intelligence committee, we deal with the nation’s classified secrets. We have a number of people who came out in support of us,” she said.

John Brennan, the nation's top counterterrorism official, rolled his eyes in August when asked if there was anything to Bachmann's claims. "I have no idea of what it is that they are making reference to, and I’m not even going to try to divine what it is," he said. Of course, that's exactly what he would say if he were working for the Muslim Brotherhood. In September, after the attacks in Libya, Bachmann claimed vindication for her witch hunt at a conference of evangelical conservatives in Washington.

For his part, Graves said, “I’ll stand with John McCain and Speaker Boehner and Lindsey Graham ... We don’t need to be polarizing, we don’t need to be throwing mud, especially when it’s uncalled for,” he said.