On Sunday, our team embarked on a different kind of marathon: Helping one of the most ravaged sections of NYC 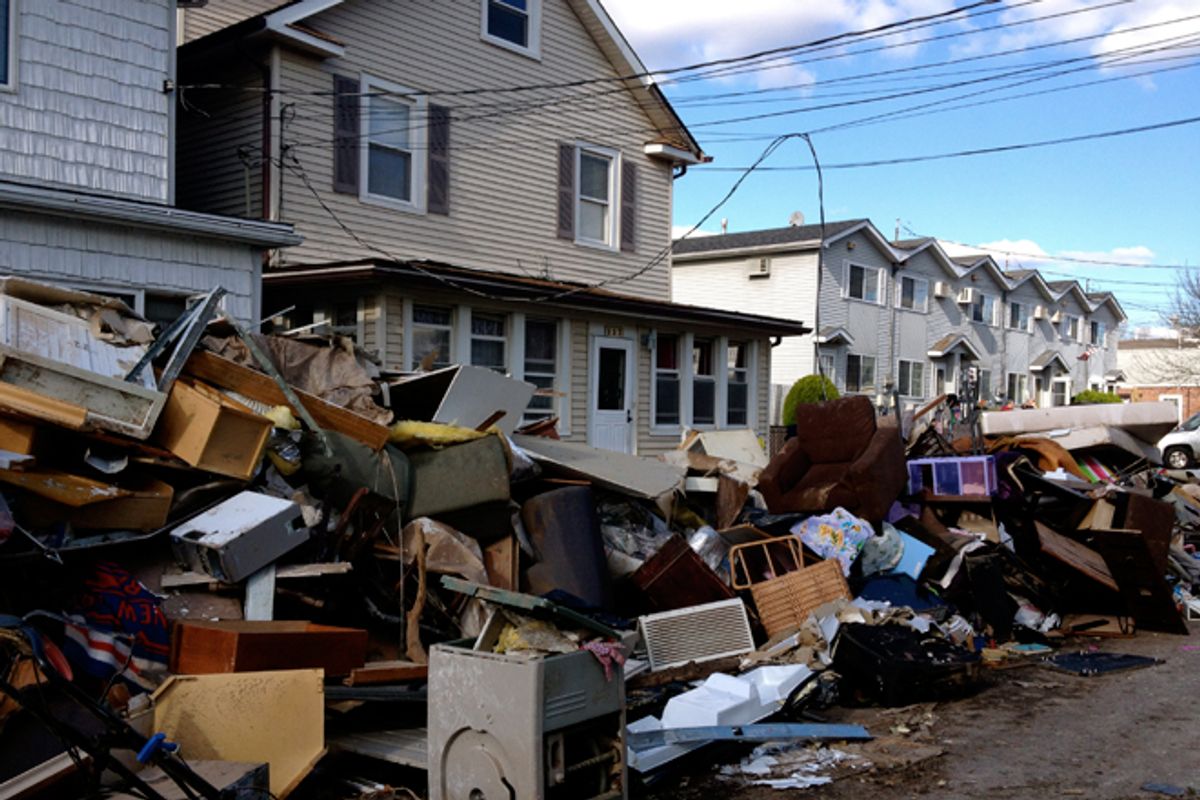 It was a perfect Sunday morning, clear and invigoratingly cold. It was the Sunday morning I'd had in my head every single day for the past six months, a day that had informed how I'd eaten and slept and run and watched my toenails grow black. A once in a lifetime day. But as my teammates from Gilda's Club and I crossed the Verazzano Bridge on Nov. 4, we weren't sprinting out of Staten Island. We were driving into it.

The email came late Friday afternoon, just minutes after the mayor's office announced that the New York City marathon would, for the first time in its four decade-long history, be canceled. It was from one of the members of our team, a Long Island businessman with an eight-seater vehicle, saying that he was now coordinating volunteers to go into Hurricane Sandy–ravaged Staten Island on race day. Messages flew back and forth over the next day, until before long, he and his family had commandeered a few more vehicles, and team members had divvied up a list of needed supplies. And then, at 9 a.m. Sunday, just as the race would have been starting, we met up at a midtown hotel a few blocks from the marathon's Central Park finish line, packed the car trunks, and drove off.

We had plenty of company. More than a thousand runners went into Staten Island that day, many running into the borough with packs of supplies on their orange, official marathon shirt-clad backs as part of a swiftly organized effort that came together on Facebook.

Our little caravan got into town early, where we met up with our point person on the other side, a petite blond woman who directed us in how to organize the goods, and separated us into the workers who would do cleanup and those who would do distribution. "I should warn you," she said. "It's chaotic out there. You just have to go out and look for where you can help." It was a loose game plan, but it quickly became apparent it was the only one.

The shoreline streets where I'd run the Staten Island half-marathon just a few weeks earlier had been utterly transformed. There were downed trees and branches still dotting the sides of the roads. There were houses caked in dirt where you could see how alarmingly high the water had risen. There were empty shells of homes and burned out buildings and structures and cars that had been picked up whole and placed back down, askew, somewhere new. There were mountains of debris everywhere. Except it wasn't debris. It was the contents of people's homes. It was entire lives – Christmas ornaments and couches and grandfather clocks, caked and muddy and smashed to bits, on the curb.

The organized disaster relief effort over the past few days has spread out over a wide swatch of affected communities, in places like Red Hook, the Rockaways and Long Island. I can't speak to how efficiently it's going on Staten Island, only to what I saw on Sunday. What I saw was three men in fatigues, one cop and a few garbage trucks. The overwhelming majority of work I saw being done was by volunteers.

I saw a house whose front yard area had been turned into a makeshift donation center, with a crowd streaming in and out, picking through boxes of clothing. I saw similar sites on street corners, like the one where a dark-haired young woman in a ponytail stood behind a table organizing foodstuffs into tidy piles, telling us where to put the jerky. I saw an obese man on the front steps of his torn-up home asking for assistance getting up to the corner to get toilet paper and paper towels, and a volunteer dashing off to go bring them to him. I heard a man say he'd seen a guy whose house had been ruined try to cut his wrists right in front of him. As we mulled how to pass our large vehicle under a sagging wire, I saw an old woman emerge from her damaged house with a mop to help raise it so we could drive safely through. I saw people changing their clothes right on the spot. I saw a young man wearing a black garbage bag who'd spent the day cleaning out the basement of a couple who'd lived in their home for 35 years. "My buddy grew up around here," he said, "so a bunch of us figured we'd come over and see what we could do."

As we drove around, we exchanged our stories of the week that had passed. Several runners who lived downtown or in further 'burbs had lost their power. One woman, who'd been in the dark for several days, wound up spending a night in the uptown hotel room an out-of-town relative had booked for the marathon. "I felt so guilty," she said, "when people still have no power." And a little later, another one of those runners – one who would in fact be returning later to a cold, dark, powerless home — said, "I can't get upset about the marathon. When I see what other people have lost, I can't complain." And then, just a few minutes after, a man whose home had been decimated cautiously rummaged through a box of shirts, because, he said, he didn't want to take too much. And it all made me ache. Because this is not a competition of suffering.

Sandy was unprecedented in both its scope and its awful selectivity. Even in New York, the city of absurd extremes, we've never had a moment when the difference between those who have and those have not has been so sharp and stark, has been in such close proximity.

Its toll is not just still incalculably physical; it's profoundly emotional in a way that will affect the soul of this city far into the future. And among the immense challenges it continues to present is how to heal from it without divisiveness and resentment and survivor guilt. I've seen the price those responses extract. On 9/11, my stepfather got out of the North Tower just in time, but several dozen of his Port Authority colleagues did not. Six months later, he was on an operating table getting a triple bypass. The burden of survival can, if we let it, be a terrible weight on the heart.

I wish we could give ourselves permission to feel disappointment and not conflate it with complaining. Permission to acknowledge challenges and inconvenience and not feel we don't have a right because others have it worse. I've thought a lot the past few days about Brene Brown and her case for the power of vulnerability. Not just in the astonishing ways people have opened up and given so much, but in the painful ways that, in the wake of a catastrophe, shame threatens to engulf us.

When we let ourselves believe we're not allowed to experience sadness or frustration because we can still turn on a light switch or we didn't lose all our possessions while someone so very close did, we risk cutting ourselves off from our feelings, which serves no one. We risk judging others for their emotions. Compassion is not guilt. Gratitude for whatever we have doesn't look like an apology. And I don't believe that anyone I saw on Staten Island Sunday is jockeying for disaster supremacy against the victims of famine in Somalia, or the mother who's just lost a child. I do believe that to sincerely say "I'm so sorry this happened to you" doesn't have to include the unspoken understanding "and that it didn't happen to me."

As my teammates and I walked around Staten Island, we had people coming up to us asking for garbage bags, for bleach, for sweat shirts and warm coffee and bagels. A woman approached and asked, "Do you have any medicines?" And not one single person asked, "Can you please tell me how guilty you feel? Because that will help rebuild my house right now." Instead, I had an older man, a local bus driver who was walking around looking for supplies with his adult daughter, just ask me for a hug.

It's been a devastatingly unforgettable past few days. But if there's one moment from that once-in-a-lifetime marathon-that-wasn't day I'll always remember, it'll be the sight of a cigarette-smoking matron leaning over her fence as warm clothing was handed up to her. From her perch, she could see the whole of her ruined street, and a steady flow of displaced neighbors cleaning up and volunteers helping them. "It's a beautiful life," she said. She said it loudly and fiercely, she yelled it down at us below. She's right; it is a beautiful life. It's beautiful and it's cruel and it's amazing and it's horribly unfair and all that we have within it is each other. All that endures is not how badly we feel about ourselves but how kindly we choose to treat each other. What I'll remember from Sunday is a lady with a cigarette who saw something transcendent within ruin. Who saw a group of people who let themselves cry and who let themselves smile, without judgment or blame, working together to pull a broken city out of the dark and back, slowly but inexorably, into the light.

If you would like to support Gilda's Club, which was without power for several days after Hurricane Sandy and couldn't service its community, you can make a gift here.