"Hallucinations": Seeing what isn't there

Oliver Sacks explores the strange world of hallucinations, and says they're far more common than we realize 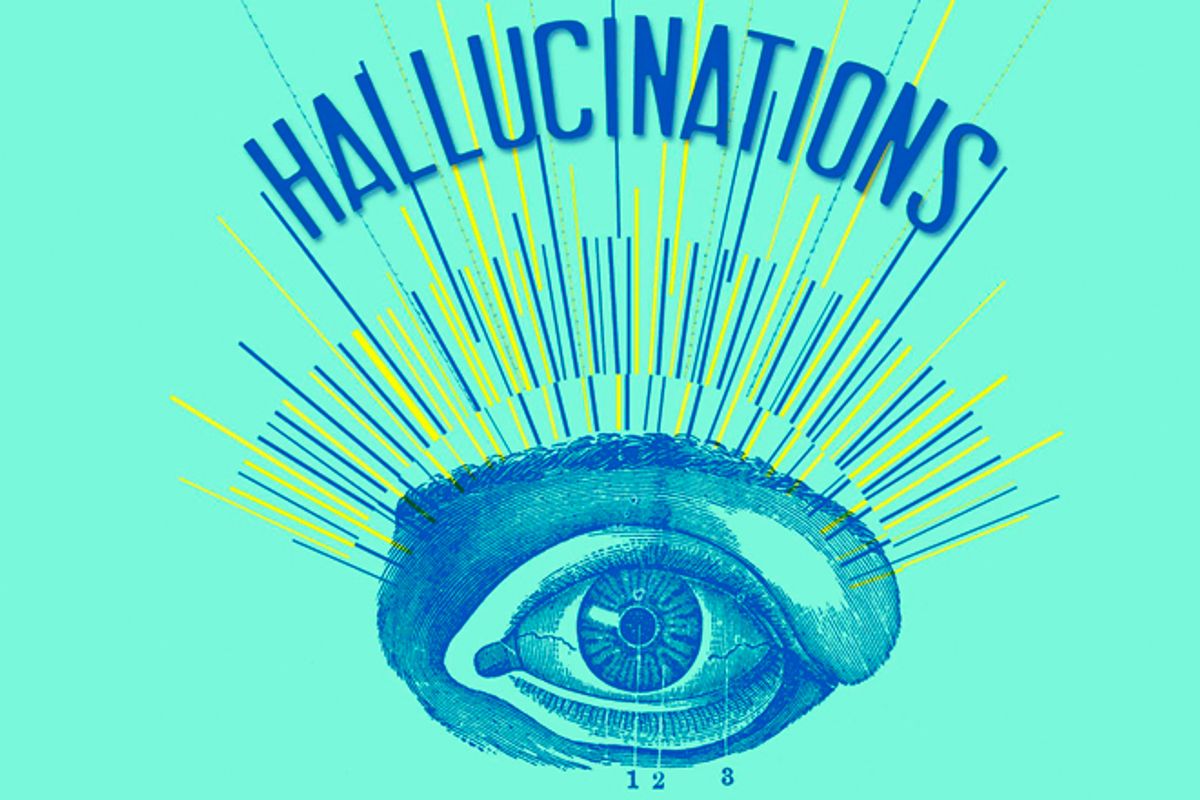 Oliver Sacks may be the father of the popular neurological best-seller, but he's distinctly different from the current crop of authors, be they as substantive as Daniel Kahneman ("Thinking Fast and Slow") or as dodgy as Jonah Lehrer. The latest iteration of the genre usually makes generalizations about human behavior on the basis of quantitative studies. The particular histories of the unnamed subjects of those studies are irrelevant; all that matters is the aggregate, because only in writing about the average person can today's neuroscience author claim that his book is about you, the average reader.

Sacks, on the other hand, has always been fascinated by outliers. It's his professed belief that the underlying structures and functions of the brain can be most captivatingly glimpsed in the experiences of the man who mistook his wife for a hat and the man who kicked his own leg out of bed. This approach, not incidentally, also makes for much better stories than, say, descriptions of studies in which college students were asked to memorize numbers under trying circumstances. There's an aura of self-help surrounding most popular neuroscience books today, with all the banality that term implies. What the Sacks style lacks in personal applicability it makes up for in marvels. So much so, in fact, that filmmaker Wes Anderson offered a parody version of Sacks in "The Royal Tenenbaums": a shrink, played by Bill Murray, whose career is built on exhibiting his clients' freakishness to the public.

In Sacks' defense, he's far more respectful of the patients he writes about than that, and he's always happy to offer up his own foibles for scrutiny. In his new book, "Hallucinations" — a brisk but characteristically absorbing survey of the many ways human beings perceive things that are not there — Sacks recounts his youthful experiments with a wide assortment of recreational psychoactive drugs. Although he admits that some of these adventures were ill-judged, he credits an amphetamine-driven "ascent into the stratosphere" with the revelation that he ought to write a book about migraine. That insight was the beginning of an illustrious career (as well as the end of Sacks' amphetamine use).

In migraine — specifically the visual distortions that come with classic migraines — Sacks finds the most basic form of hallucination: luminous, zigzaggy patterns that he suspects reflect "something ... constant in the architecture of the visual cortex itself." The predictable sequence in the symptoms of classic migraine is like a neural travelogue, tracking the passage of the electrochemical impulse caused by the disorder as it moves through the structures of the brain. Migraine hallucinations, however, are pretty small potatoes compared to some of the more outlandish manifestations described in "Hallucinations."

Among the many causes of hallucination (which can take the form of any sensation, from images to sounds, smells, tactile sensations, spatial orientation and the less specific but still powerful impression of a nearby presence) are sensory deprivation, epilepsy, parkinsonism, fever or chemical imbalances, the transition into or out of sleep, drug use and a condition called Charles Bonnet syndrome, in which the brain of a person whose vision is impaired reacts to the loss of real-world stimulation by serving up an often extravagant pageant of moving images. None of these mental events, Sacks points out, resemble the deliberately conjured products of imagination or memory. Instead, hallucinations "appear in external space, like the objects of perception" and are not subject to conscious control.

Hallucinations are also, Sacks insists, a lot more common that most of us realize, simply because we seldom like to talk about them. Many people worry (with good cause) that if they admit to "seeing things" or "hearing voices" they could be mislabeled as psychotic. Even when sensory phantoms are manifestly harmless, they can be a bit embarrassing. I often have "hypnopompic" hallucinations just upon waking up, episodes in which I'm briefly convinced that random objects are hovering in the air over my bed. There's nothing like reaching out to grab something that isn't actually there to make you feel like a fool, and as a result it's not a fact I've shared with many people (until now!).

One young woman Sacks treated had had surgery to remove a "vascular malformation" in the occipital lobe on one side of her brain. This brought about "visual seizures" that at first took the form of simple hallucinations of bright lights and colors. Weeks later, however, she experienced "complex" hallucinations, in which her brain served up a bizarre menu of transparent images on one side of her visual field. For a while, the figure of Kermit the Frog filled the left half of her world, although he became progressively smaller as time went by. "Why Kermit?" the woman asked Sacks. "He means nothing to me."

In fact, the majority of the hallucinations Sacks describes have no special relevance to the people who see them and are as non-interactive as a movie. Whether they are caused by Charles Bonnet syndrome, epilepsy, brain lesions or a combination of parkinsonism and the drug L-DOPA often used to treat it, these manifestations frequently baffle their one-person audience. Why, they ask, is my brain taking the trouble to show me things I couldn't care less about? Cartoon characters, animals and human figures walking around in elaborate costumes are inexplicably common figures in this type of visual hallucination. One woman told Sacks that, while riding in a car, she often saw modern buildings morph into "more historic looking ones." Since she was a historian herself, this pleased her, and for every hallucinator disturbed by his or her visions, there is another who rather enjoys them.

Most, however, learn to disregard their hallucinations as the insignificant neural effluvia they are. "Amy T." -- a correspondent of Sacks' who is readily identifiable as the novelist Amy Tan -- developed a mild form of epilepsy, possibly as a legacy of Lyme disease. When waking up or dozing off, her brain sometimes presents her with the spectacle of a spinning odometer and beings that look like "someone's inept attempt to make an alien creature for a movie set ... like a spider with a Darth Vader–like helmet head." Other hallucinators have heard phantom voices, or music (one poor woman had to listen to Bing Crosby singing "White Christmas" over and over again), smelled pleasant or unpleasant odors, or seen nonsensical text or musical notation overlaid on any handy surface. Most have learned to disregard these strange manifestations and get on with their lives.

But not always. Some hallucinations -- such as the most severe symptoms of post-traumatic stress disorder -- flood their recipients with overwhelming emotions. Certain epileptic seizures take the form of profound spiritual or mystical insight, like the religious transports that electrified Dostoyevsky. Occasionally, they may even change the course of history, like the angelic voices and visions, possibly epileptic in origin, that visited Joan of Arc, directing her to lead the military effort to expel the English occupiers of France.

"Hallucinations" takes in a pretty broad spectrum of syndromes, disorders, curiosities and less easily characterizable experiences, and beyond his assertion that hallucinating is more prevalent than we might suppose, Sacks doesn't come to any striking conclusions. Instead of dishing out the usual half-dozen purportedly useful, possibly dubious and probably oversimplified speculations about the average mind, he gives us the exceptional and the idiosyncratic. He conveys, as ever, an expansive enthusiasm for the brain itself, for its complexity and resilience and for the myriad ways that the individual owners of remarkable brains have learn to understand, cope with and even relish their own neural eccentricities.