The president is spending his last campaign day in Ohio, Iowa and Wisconsin -- states he was losing just a year ago 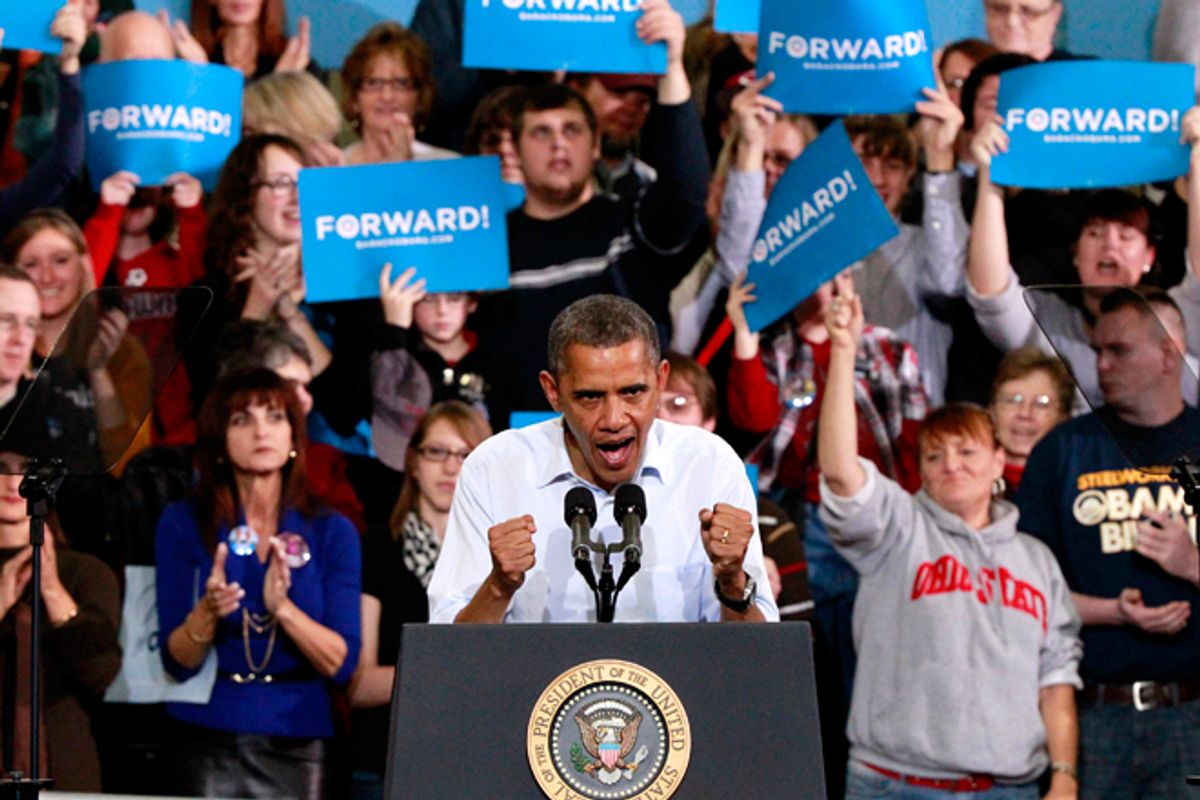 President Obama is zipping around the Midwest to Ohio, Wisconsin and Iowa, states that are now widely considered his firewall, on the final day of his 2012 campaign. That's because if he wins all three, given the pretty fixed red-blue map we all have emblazoned in our minds, he wins the election.

But a little over a year ago, the New York Times zeroed in on the Obama campaign's looming 2012 challenge. He was way behind in Rust Belt states like Ohio, Wisconsin and Iowa that had carried him to victory in 2008. So the Obama team, the Times reported, was busy "charting an alternative course to re-election should he be unable to win Ohio and other industrial states traditionally essential to Democratic presidential victories."

The trouble in the Rust Belt states, the Times and other outlets reported, was that "his support among blue-collar white voters far [was] weaker than among white-collar independents." Trailing in Ohio, Wisconsin and Iowa, the Obama campaign was focusing on states like "Virginia, Colorado and Nevada, maybe even Arizona, places where the new Obama coalition of minorities and college-educated whites would carry the president to victory."

One year later, among the remaining swing states, the president is stronger in Ohio, Wisconsin and Iowa than in the Sun Belt. The fact that he's spending his final day campaigning in those three states Monday underscores their importance. And his Rust Belt firewall may be white working class voters, particularly women. "If Romney were getting the same white vote [in Ohio] that he's getting in Virginia, he'd be winning," former John McCain strategist Mike Murphy said Sunday on "Meet the Press."

As the National Journal's Ron Brownstein wrote Friday, nationally Obama is losing white men without a college degree to Romney 65-32 percent. But he's doing 10-12 points better with that group in the Rust Belt, though still trailing.  Romney is also carrying working class white women 58-39, a smaller margin. But Obama is actually winning a majority of their votes in Ohio, Wisconsin and Iowa.

These numbers are crucial, because all three states remain disproportionately white (compared with the rest of the country, and particularly the states in Obama's emerging Sun Belt coalition.)

So what can Obama's strength in the Rust Belt tell us? It clearly has a lot to do with the auto industry rescue, of course, plus Obama's getting tougher on China and trade, which hasn't resonated much beyond the Midwest. The Rust Belt – on Hardball the other night, Ohio Sen. Sherrod Brown told me to call it the Tech Belt, which will take some getting used to, sorry, Sen. Brown – feels the positive economic impact of Obama's decisions in ways other parts of the country don't.

“In the Rust Belt the axis on which the decision occurs is much more focused on these questions of economic populism," Democratic pollster Geoff Garin told Brownstein. "But in [Sun Belt] states where the suburban vote is more dominant the decision making is much more along the line of in step or out of step with the voters’ philosophical views [on social issues]."

“That [Bain] narrative is so much more resonant with blue-collar voters up there in the Midwest,” Garin added.

A Republican strategist put it more cynically, telling Brownstein: “The complaint that every other working class white person had about this administration—where was my bailout?—has been answered in Ohio."

It's possible that a pro-Obama tide will carry the president to victory in his Sun Belt swing states, too. Already Nevada has been widely put in the president's column, as his strong support among Latinos outweighs his struggles with the state's working class whites. But to flip Mike Murphy's comment around, the president would be winning overwhelmingly in Virginia, Florida and North Carolina if he was doing as well with whites there as he is in Ohio.

What can we learn from this outcome, which would have been shocking only a year ago? That a Democratic president, whatever his or her race, has a strong shot with working class whites if their policies make an economic difference in their lives wins back the white working class. It's hard not to wonder whether the president's white support might be higher in Nevada, for instance, had he done more for its foreclosure victims, who certainly needed a "bailout."

Some centrist Democratic analysts, like William Galston, say that means Democrats must turn back to bread and butter issues and away from "cultural" issues like contraception and abortion. “You’d need another insurgency of the center,” he told Browstein, to win back working class whites. But the numbers in Ohio, Wisconsin and Iowa don't back that up, at all. The fact that Obama is running stronger among working class white women than among white men tells me that his focus on so-called women's issues is helping, along with his auto-rescue.

It's also time for Democrats to acknowledge that "so-called women's issues," like contraception, healthcare and choice, are very much bread and butter issues for most American women, including white women. Democratic analysts ought to be looking for ways to expand the party's coalition, not fracture it by minimizing the power of cultural issues to expand the base.  I'll have a lot more to say about this in the days to come.