The political evolution of Leslie Knope

The city councilwoman takes on big business and super-size sodas. But will she ever be able to take on D.C.? 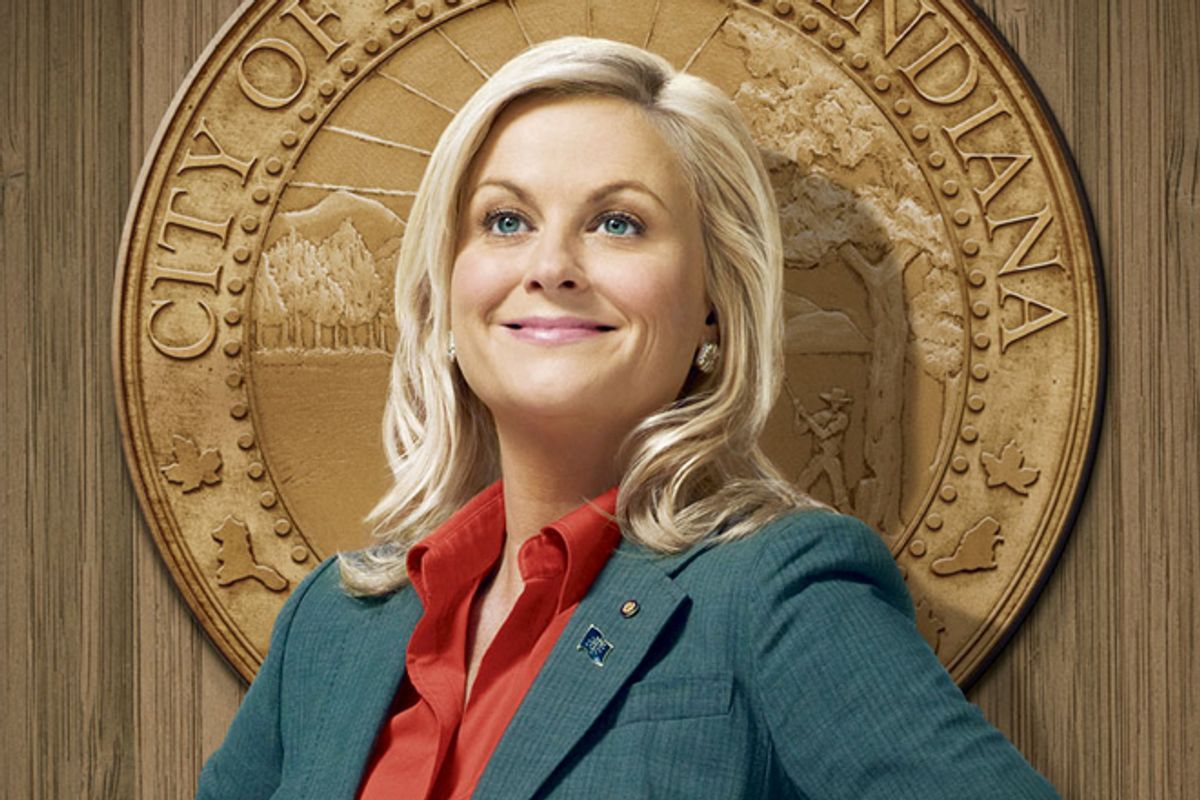 There is a moment during "Parks and Recreation’s" second season when Leslie Knope, the department’s effervescent and overachieving deputy manager portrayed by Amy Poehler, breaks down and has a libertarian moment. An attempt to fill in a pit adjacent to the house of her friend Ann Perkins (Rashida Jones) is progressing slowly, and when it seems like Leslie’s efforts to better her community – a consistent "Parks and Rec" theme – have stalled indefinitely, she vents: “I have never realized how frustrating it is to be in the government. In my next life, I am going into private industry, maybe strip mining.”

Leslie’s foray into Ron Swanson’s ideological territory was brief — she later says, “The right thing to do is not take shortcuts” — but that episode, titled "Kaboom," underlined the daunting task the showrunners, Michael Schur and Greg Daniels (who has since left), laid out for the sitcom. Along Leslie’s journey to Washington, D.C., the place she has wanted to reach since childhood, Leslie’s character has undergone a subtle political transformation. She believes a government’s purpose is to help its citizens, which has fueled her rise from deputy manager to political candidate to now, in season five, city councilwoman. Through each step, there has been a continuous theme cataloging privatization as a detriment to the community. A government’s goal is to solve problems, so even though it may be tedious to rely on public forums, or shift through bureaucratic red tape, those steps are necessary. And when a shortcut is taken, exemplified by Leslie’s brief motto, “Don’t ask for permission, ask for forgiveness,” there are repercussions: Andy (Chris Pratt) winds up in the hospital and the city just barely avoids a potentially disastrous lawsuit.

Though she's now an elected official, Schur has allied Leslie with a lineage of political powerhouses that began as community activists, with the intent of proclaiming that virtually anyone can positively impact the lives of the neighbors. Barack Obama is often mentioned, and Bella Abzug, a social activist who later became a New York congresswoman, is featured among Leslie’s political heroes (their portraits, along with those of Dianne Feinstein and Sally Ride, dot Leslie’s Parks and Rec and City Council offices). Still another: Harvey Milk, who is connected to Leslie during the raised uproar over the marriage of two male penguins. Leslie becomes an icon to the gay community – “She’s Leslie Knope and she wants to recruit you!” – and is feted at the Bulge, a gay bar in Pawnee.

However, Leslie struggles to understand why people refuse to trust government, why it is easier to believe the private sector will smooth out all of life’s inefficiencies. She planned the Harvest Festival after a bout of frustration and a sense that Pawnee no longer had faith in the government — including her department. Leslie’s decision to run for Pawnee City Council can be traced back to the show’s third season, an arc of episodes that diagrammed how a government should work. Organizing a festival that has been dormant for over 20 years is, as Leslie says, a “huge government project,” and it is a success, drawing huge crowds despite the presence of a curse (courtesy of the Native American Wamapoke tribe).

But rather than simply demonstrate the benefits of a sound government, "Parks and Rec" goes one step further and explains how corporate greed can severely undermine a community. Despite her excessive sweet tooth, Leslie has constantly squared off against Pawnee’s sole job generator, Sweetums. A large percentage of the town, in particular its children, has been afflicted by obesity; as Leslie notes, Pawnee is the fourth most obese city in America. A timely held public forum could not stop Sweetums from running the town’s park concession stands. But Leslie is unafraid to later challenge the corporation’s attempt to continue selling 64- to 512-oz. sodas and votes for a soda tax.

Leslie’s view toward big business is crystallized during the City Council campaign, and the debate between the candidates provides one of the show’s most electrifying moments. After Nick Newport Jr. (Paul Rudd), the scion to the Sweetums fortune and Leslie’s main competition, announces that if Leslie wins, Sweetums might be forced to relocate. Leslie’s retort is devastatingly sharp: “I’m angry that Bobby Newport would hold this town hostage, and threaten to leave if you don’t give him what he wants. It’s despicable. Corporations are not allowed to dictate what a city needs. That power belongs to the people.”

It is worth noting that besides Ann, whom Leslie principally leans on for reassuring support, Leslie’s guiding force falls squarely on Ron Swanson (Nick Offerman) and Ben Wyatt (Adam Scott), who began as a foil and is now her fiancé — the majority of her contemporaries have significant flaws. Joan Callamezzo (Mo Collins), who hosts Pawnee’s "Meet the Press"–esque television program, is more focused on scandals and sensationalism, complete with her Gotcha! Dancers. Jennifer Barkley (Kathryn Hahn), Newport’s campaign manager and Ben’s boss, is financially driven and cares little for the issues or outcomes of the races she oversees. An activist with the Society for Family Stability Foundation, Marcia Langman (Darlene Hunt) is somewhat similar to Leslie, but as a fierce puritanical conservative, who recoils at anything sex-related, she squanders her position to provide any help by advocating outdated guidelines for social norms. Leslie's attempts to teach sexual education to Pawnee’s senior citizens are met with resistance from Marcia and her obviously gay husband, who stress abstinence and silence about the topic.

This season, after years of working for an accommodating boss, Leslie is now faced with the most daunting prospect of her life: making compromises. It's a new political landscape for someone who previously succeeded by outworking everyone and prodding others to accomplish a task. She has been forced to yield, and attempting to align herself with the kinds of people she'd normally rail against: one city councilman who, when first elected decades ago, wanted to de-integrate baseball, and another obnoxious councilman, who expresses his resentment by insisting on dropping a daily deuce in her office bathroom. "Parks and Rec" could have easily transitioned its story line into one about Leslie losing her values and confidence. Instead, Schur continues to underscore a government’s prime purpose, which means that Leslie ultimately uses her City Council seat to help Pawneeans manage quality-of-life concerns — she thinks of their lives in the long-term.

Leslie's greatest test has come from how she first reacted to the political scene she encountered when she went to visit Ben in Washington — she was completely, unexpectedly intimidated. She may not have to deal with that for awhile, now that Ben has proposed marriage and announced he is moving back to Pawnee, in the most recent episode, "Halloween Surprise." But, from her failed attempt to meet with an environmental official, to her realization that her river cleanup proposal will never distinguish itself from the piles of submissions by scores of other towns, to Ben's female colleagues, whom she described as the offspring of C-SPAN and Neiman Marcus — she was made to feel inadequate, small. Back in Season 2, Leslie yearned for a country where women were “judged not by the flatness of their tummies but by the contents of their brains.” If she really wants to be the next Hillary or Madeleine Albright or Bella Abzug, or any of her heroes, she'll have to develop a thick skin and figure out how to navigate the brutal business of politics. Can Leslie overcome these feelings and realize her potential? As Ron poignantly tells Leslie as she struggles with her soda tax vote, “You may have wandered into unknown terrain, but you’re still you.”

Matt Giles is a reporter at New York Magazine, and has contributed to ESPN the Magazine, ESPN Insider and NYMag.com.