When did our very identities become inextricably bound to our political parties? A political scientist explains 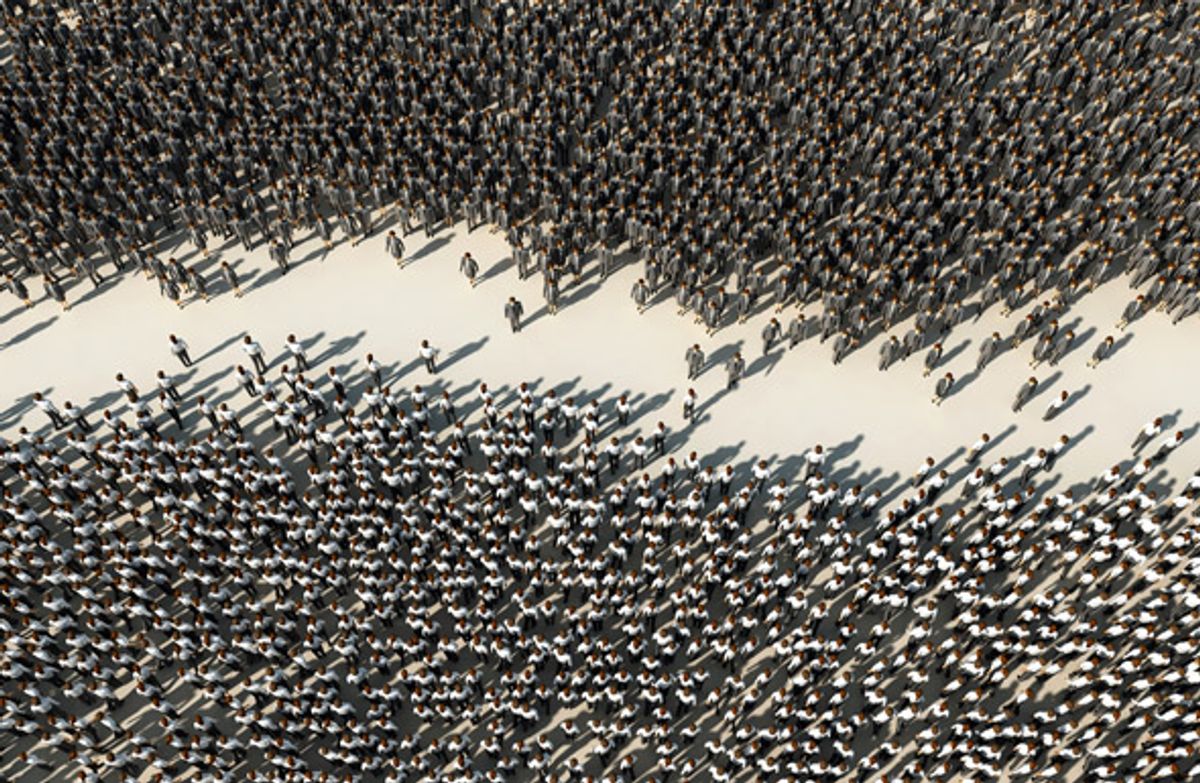 As another bitterly fought, closely contested presidential campaign comes to an end, the American electorate appears hopelessly conflicted. Even as we plead for compromise and bipartisanship in Washington, we increasingly split into two mutually antagonistic camps.

This apparent contradiction has led puzzled academics to different conclusions: Some insist the public is becoming strongly polarized, while others believe the phenomenon is largely limited to the political and media elite. Political scientist Lilliana Mason’s analysis is more subtle, and more disturbing.

Her research suggests that, in terms of our attitudes towards issues, we are no more polarized than we were decades ago. But our emotions, and the behaviors they drive, have largely uncoupled from our actual analysis of the issues.

Essentially, the Stony Brook University scholar argues, our identities have become increasingly intertwined with our political affiliation. As a result, we feel ever more certain that our party is right and the other is wrong—even in cases where their positions aren’t far apart.

Our attitude towards the opposing party has become, basically, tribal: We detest them simply because they’re the other side.

“The American public can hold remarkably moderate and constant issue positions, while nonetheless becoming progressively more biased, active and angry when it comes to politics,” she argues. “Even as we agree on most issues, we are becoming increasingly uncivil in our approach to politics.”

MASON MAKES HER CASE in two papers: one soon to be published in the journal American Behavioral Scientist, and another prepared for a conference of the American Political Science Association. She analyzed data from the American National Election Studies from 1972 to 2004, along with a new study she conducted in November 2011, featuring a nationally representative sample of voters.

“I asked people questions like, ‘When you talk about Democrats (or Republicans), do you say ‘we’ rather than ‘they’?” she said. “When someone insults Democrats, do you feel insulted? I wanted to get a sense of group membership—the extent to which your party identification feels like being part of a team.”

Mason discovered that what she calls “behavioral polarization”—anger at the other side, activism for one’s own side, and a tendency to look at political arguments through a biased lens—is driven much more strongly by that sense of team spirit, as opposed to one’s views on public policy.

“Ideological identity doesn’t necessarily reflect your position on the issues,” she said. “It means you feel like a liberal or a conservative. You can identify very strongly as a liberal, but that doesn’t necessarily mean you hold the most extremely liberal positions. You can, say, think there should be some restrictions on abortion, but still feel that liberals are your group, your people.”

And the notion of defending “your people” is an emotional impulse that can be traced back to our distant evolutionary past. After all, banding together in mutually protective groups is how civilization developed in the first place.

“This is where ethnic conflict comes from. We’re hard-wired to protect our group,” Mason said. “You can tell someone their party supports something that they’re against, and they’ll start to move toward their party’s position.”

If this in-group/out-group tension is such a basic human impulse, why does it seem to be intensifying today? Mason cites several factors. Many people now get their news through cable television or the Internet, both of which allow us to “find the messages we are looking for, and not read anything else,” she noted.

But the larger issue, in her analysis, is the “cleavage” that took place in 1964, when President Lyndon Johnson and a Democratic Congress passed the Civil Rights Act. This horrified many conservative whites who had identified themselves as Democrats, and thus began a gradual realignment in which the Republicans became an overwhelmingly white, ideologically conservative party with a strong Southern base.

“Partisan identity is a very strong attachment,” she said. “Switching parties is very difficult: it’s like switching religions. So that process took a very long time—about a generation.”

When this movement—conservatives abandoning the Democratic Party and liberals leaving the GOP—finally solidified, party and ideology came into strong alignment. Simultaneously, other elements that make up our social identity also began to line up in partisan ways.

“Religion got roped into this in the 1980s, when the religious right became active in support of Republicans,” Mason said. “Whether you go to church is a very strong predictor of what party you’re in right now. Secular people are pretty much all Democrats. All religious people are not Republicans, but most evangelicals are.”

So the various factors that make up our sense of identity—race, religion and ideology being three of the biggest—now align neatly with one party or the other. That being the case, we tend to feel strong solidarity with our fellow Republicans or Democrats, and to take attacks on our party quite personally.

“The negative side of this is obvious,” Mason said. “There is no way to educate people into being less polarized.” While she sympathized with Jon Stewart’s 2010 rally for civility, she considers it a hopeless cause.

SO WHERE DOES THIS LEAVE PEOPLE who are genuinely in the middle?

“I have friends who don’t feel comfortable with either party, and don’t feel either is very representative of their beliefs,” Mason said. Such people “look at strong partisans like they’re nuts!” she laughed. “It’s like a non-sports fan watching a fan watch a game.”

At least potentially, such people are “more clear-minded in their assessment of what the parties are doing, and less blinded by the bias that partisans have,” she said. But on the other hand, they also tend to be less informed about the issues, and most are disengaged from the political process.

That leaves the rest of us: People who feel kinship with our own side, distrust toward the other side, and wariness regarding compromise. Mason sees no obvious way out of this distressing dynamic.

If her analysis is accurate, the only way to reduce the anger and bias would be “to reduce the strength or alignment of political identities.” In other words, a hugely impactful issue would have to come along—something that forces us to question our emotional connection to our respective parties.

The racial and regional strife that culminated in the Civil War did just that, birthing the Republican party. Mason is hard-pressed to imagine the next such break, but speculates it may may revolve around environmental issues.

“Until a new cleavage arises that can split partisans into new political camps,” she concludes, “we are likely to continue to behave as if we strongly disagree, even when we do not.”