Embattled antiabortion forces hope to pull it out for Romney

Abortion opponents have had a lousy campaign, but they think they might be able to deliver Romney a key swing state 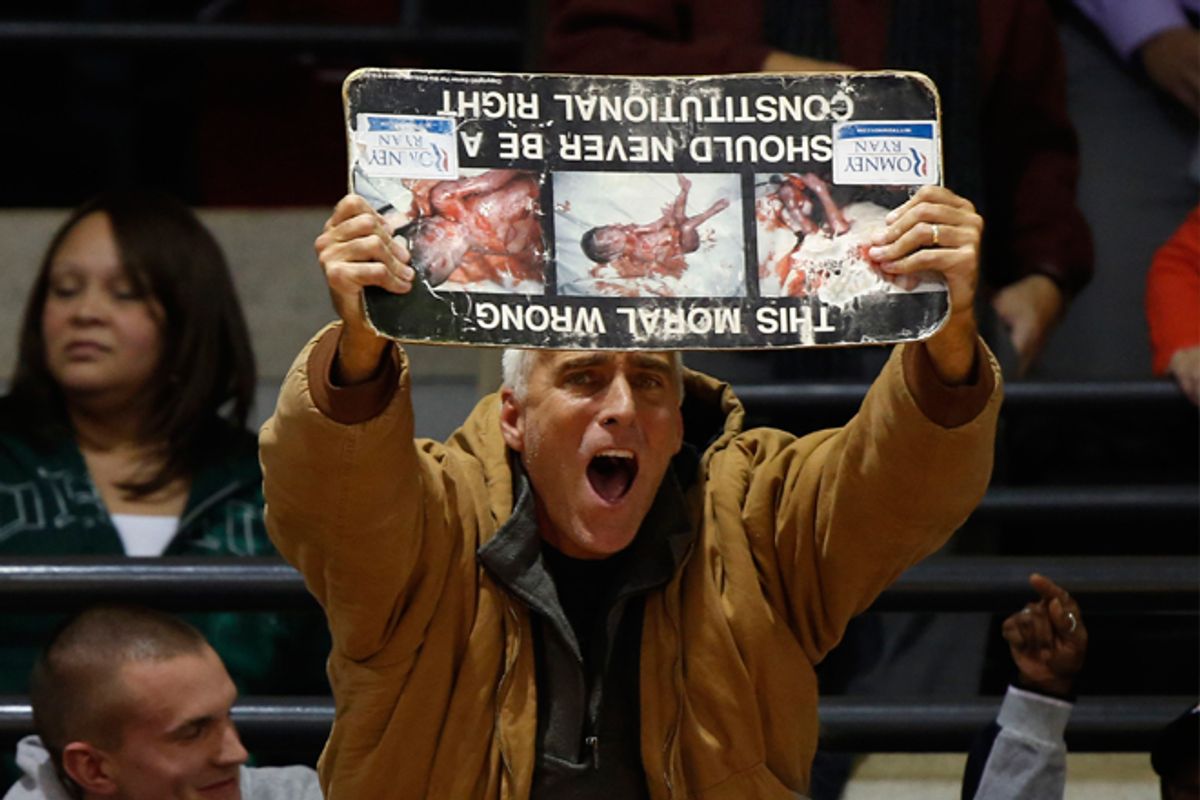 An anti-abortion protester at an Obama campaign event at the University of Cincinnati on Nov. 4. (Reuters/Larry Downing)
--

In Ohio over the weekend, an antiabortion protester interrupted an Obama event by shouting and holding a sign, upside down, that read, "This moral wrong should never be a constitutional right!" He was escorted out, and Obama made a joke about sports fans being peeved at a loss. But if you believe right-to-lifers, the man represented more than an isolated incident.

After years of public-relations and legislative wins, the anti-choice movement is sounding unusually defensive lately. All indications are that they've driven a lot of women into the Obama camp, further widening the much-discussed gender gap, and adopting the movement's aims has possibly cost Republicans the Senate.

"Written off, derided, neglected -- and now ruthlessly exploited by the Obama campaign with a tailwind of media bias," is how Marjorie Dannenfelser, president of the anti-choice Susan B. Anthony List, bitterly describes her side in a recent Washington Times Op-Ed. And yet, she argues the issue "may yet be decisive" -- for Mitt Romney. "Social conservatives, outgunned in so many media shootouts, excel at grassroots mobilization. If Ohio tips to Mr. Romney, you may not see us in the headlines, but our handiwork will be all over it," she writes.

If Dannenfelser is right -- and that's not out of the question until the votes are all counted -- it would be contrary to visible trends, including national polls and such statewide swings as the one GOP Senate candidate Richard Mourdock touched off  by taking what these days is a fairly standard "pro-life" position. And it would be a real irony for Romney, who, of course, was never the right-to-life movement's first choice.

At the RNC, I watched various movement stalwarts, including Dannenfelser, garland primary losers Rick Perry, Michele Bachmann and Rick Santorum with awards. The best anyone was willing to say about Romney was that they believed he would be on their side -- perhaps because they believed that, in today's GOP, he would have no other choice. (They have been highly disciplined, if unenthused -- see, for example, LifeNews' "Top 10 Reasons for Pro-Lifers to Vote for Mitt Romney," which doubles as a handy galvanizer for the other side.)

All of which has left antiabortion activists -- notwithstanding their delight at the selection of one of their own, Paul Ryan, as Romney's running mate -- only one other tack, which has so far failed to get any traction: trying to represent Obama, who hasn't shifted the status quo on abortion a whit (unless you consider contraception, to which he expanded access, tantamount to abortion) as the real extremist. So far, the Romney campaign hasn't shown much interest in helping them make that case.

Dannenfelser recently told Bloomberg that she and her allies were "disappointed" that Romney missed the chance to point out  “major differences” with Obama. “That’s why we’re working so hard to make sure people know Obama’s views,” she said, meaning swing-state ads that paint Obama as an "an abortion radical" and focus on stories of rare and more discomfiting later abortions. It's possible the Romney campaign hasn't run with that line because they don't want to talk about abortion at all, a complicated point no matter which Romney you prefer to believe on abortion. Or maybe they doubt that anyone cares about votes Obama cast as a state senator a decade ago -- votes on anti-choice legislative traps, to be precise.

Paul Ryan is trying, a little. Over the weekend, on a conference call aimed at "values voters," he said Obama's policies represented a "dangerous path," one that "grows government, restricts freedom and liberty and compromises those values, those Judeo-Christian, Western civilization values that made us such a great and exceptional nation in the first place.” And the right-wing press has also tried to do its part, with a Weekly Standard reporter pressing campaign officials to name an abortion restriction Obama supports. They dodged the question, clearly seeing a landmine, though they might have said the president still believes that women and doctors are better suited to draw those lines than government is.

Both sides of the battle know a lot is riding on Election Day -- most of all, whether voters will follow them when they go out on a limb in these issues. But there's one matter of consensus, which is how stark of a choice it is.