Barney Frank: "Within 10 years, we will have won this fight" 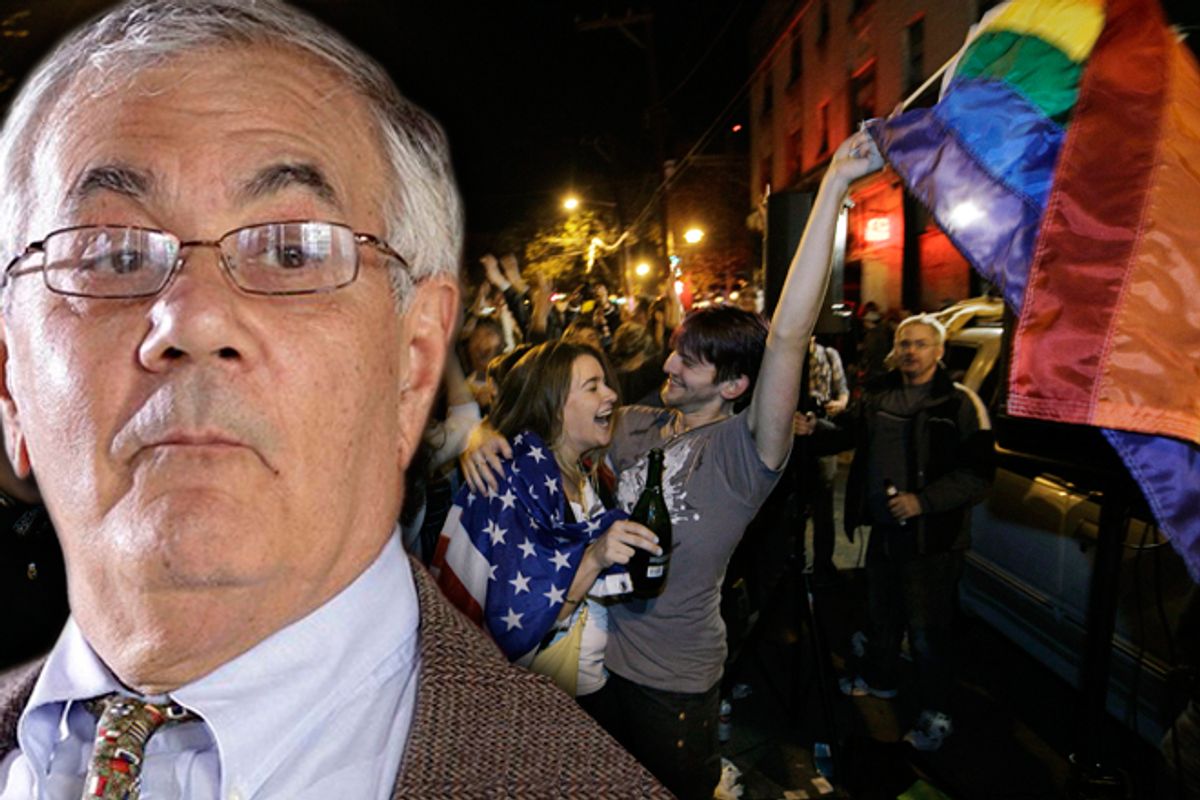 Last night was a huge win for LGBT activists. Marriage equality passed by referendum for the first time in American history in Maine, Maryland and Washington, while Minnesota rejected a constitutional amendment to ban gay marriage, and Democrat Tammy Baldwin will become the Senate's first openly gay member after winning a close race in Wisconsin.

Salon spoke with Rep. Barney Frank, the first openly gay member of Congress, to get his reaction to the news and thoughts on the future of the equality fight. This conversation has been lightly edited for brevity.

A big night, what was your immediate reaction?

I was very happy. I expected good news, but wasn’t planning on perfect news. By the way, in addition to Tammy’s win, which is big, and the referenda, we have several new openly gay members of Congress. Mark Takano in California; Sean Maloney in Westchester County in New York; Mark Pocan replacing Tammy, so that’ll mean at least five [openly gay] representatives. It’s a significant increase. And then to win all four of the referenda? It was very good news.

I think what it shows is that reality beats prejudice. When you’re fighting against discrimination, you’re in a kind of a vicious cycle. People are prejudiced so you can’t change the law, and because you can’t change the law, there’s no way to break the prejudice. In other words, people are told same-sex marriage will cause all these terrible problems. Once you have same-sex marriage, it’s very clear it causes zero problems. So trying to break out of that cycle is important. But we’ve now, I think, reached critical mass to break out of that cycle. That is, there are now enough places -- because I think California is going to be added to that list fairly soon -- so that now tens of millions of Americans now live in places where you have same-sex marriages. It’s just going to make it impossible for people to tell others it’s going to cause problems. So, it’s important in and of itself, but also as a sign that we’re on the verge of winning this fight in a very decisive way.

Did you expect to win everywhere last night?

I thought we’d win three of four; I was confident about Maine and Maryland, but I wasn’t sure about Minnesota and I was nervous about Tammy and a couple of the House seats. I thought we would win more than we lost, but I didn’t think we’d win everything.

In the bigger perspective, five years ago, 10 years ago, did you think we could have a night like last night?

No. Let me say it this way -- I think this is the moment that had the most impact for me. You know, I was a proud supporter of President Kennedy -- I couldn’t vote because I was 20 and the vote was 21 at the time -- but I remember discovering later when I was doing research that he had proposed tightening the restriction on letting gay people be immigrants. There was language in the law, but they were afraid the Supreme Court might knock it down, so John Kennedy proposed that Congress tighten up the anti-gay legislation. John Kennedy's head of the civil service, said we don’t want gay people working for us. That’s John Kennedy. Fifty years later, I’m standing on the stage with my husband when his great nephew, who is now being elected to Congress, introduces me and my husband and says how great it’s been to work with us. So yeah, I never would have thought that then.

Forty years ago, when I filed the first gay rights bills in the state of Massachusetts, I never thought we’d get to this. I have to say, if you asked me at any point during the 40 years I’ve been doing this, if you asked me what things would be like three years later, I would have been too pessimistic.

So as you leave Congress, do you feel good about the legacy you’ve left and the people replacing you?

Yes. [Rhode Island Democratic Rep.] David Cicilline, who won again last night, and [Colorado Democrat] Jared Polis, Tammy in the Senate, and the two more new people coming in, it’ll make five or six openly gay members of the House. And then I think next year you’re going to see Christine Quinn become the mayor of New York. I’d say within 10 years, we will have pretty much won this fight for equality. Only if we keep fighting, though, not if we ease up!

As you leave, how are you going to stay involved and what are the next big issues?

We still have ENDA and we still have DOMA to repeal, if the Supreme Court doesn’t do that. And we have a transgender agenda that I probably can’t pass now because the Republicans control the House, but I think the Senate will pass it just to show that it’s possible. I’m going to be just an activist -- I’m going to be writing, speaking, going on TV, advocating on public policy. So I’ll be very much involved.

Just before called, I was reading Jennifer Rubin's column saying that conservatives should abandon the marriage fight. Do you think they're starting to realize it's a losing battle?

That’s happening. They thought they could get blacks and Hispanics to hate it. But yeah, I think you’ll see that increasingly. And they semi-did it this year, in that they didn’t try to use it against Obama. They’ll stick with abortion; abortion is a tougher moral issue for them, but I think that’s right. Same-sex marriage, there’ll be fewer and fewer places where they’ll be using that as an issue.

Well, it’s been a really nice sort of a beginning and an end for me. The victory celebration for  Joe Kennedy, who’s going to be replacing me in Congress, was held in the room where Jim and I got married.