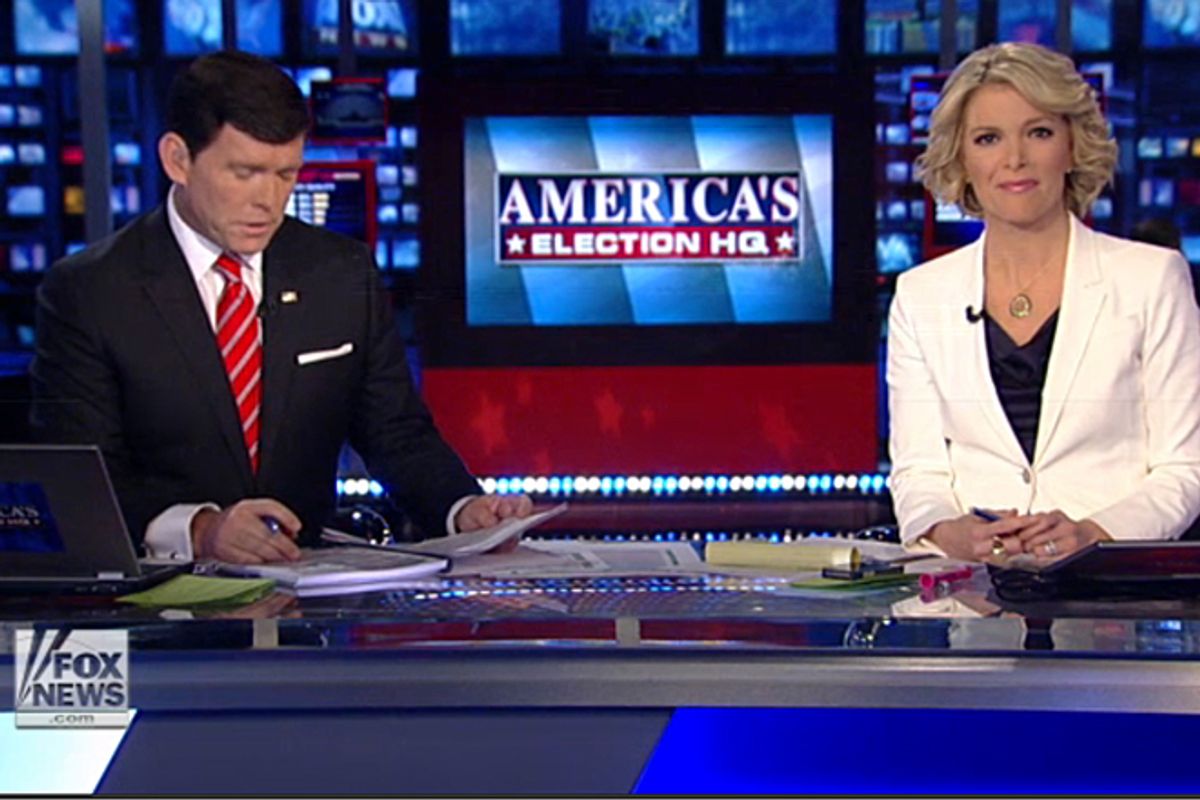 By the time we got to the 11 o’clock hour of election night on the East Coast and it all fell apart fast for Mitt Romney and the Republican Party, the atmosphere had turned grumpy and pugnacious on Fox News. No one was in any mood for the grace that the network’s commentators had displayed – no, really! — after Barack Obama’s historic victory four years ago. If Karl Rove’s on-air hissy fit about whether his colleagues had prematurely called Ohio for Obama (they hadn’t) was the undoubted highlight, the generalized sourness and weirdness spread much wider than that.

Carl Cameron, Fox’s top political reporter, generally prides himself on playing it down the middle, at least by the network’s standards. But he couldn’t stop himself from delivering an impassioned stand-up from Romney HQ in Boston that felt like an extended paean to a guy that almost everyone in the country will be delighted never to see or hear anything about again. It was OK and maybe even noble, Cameron insisted, that the Romney team were hunkered down in their hotel suite and unwilling to concede, even after Fox and numerous other news organizations had called the election. Romney had fought so hard for those who believed in him, and wanted every vote to be counted. On Election Day, he had made one final campaign trip to Ohio and Pennsylvania, “on behalf of those who are looking for work.” Cameron did not observe that Romney now belongs to that demographic himself. I know: Oh, snap.

In fairness, Romney didn’t drag it out much longer before giving the most pained and awkward presidential concession speech in recent memory. But Cameron’s soaring farewell aria, coupled with Rove’s mad-scientist desire to reanimate the past – meaning, specifically, the election fiasco of 2000 – pretty much expressed the Fox Zeitgeist. It was clearly traumatic. As election night moved rapidly from uncertainty to Republican doom, no one felt ready to let go of the robotic dream of a Romney presidency, or any of the talking points that have driven the network’s political coverage for the last couple of years: Obama was a Muslim-apologist weakling who was doomed by economic conditions and had been abandoned by his base, the polls were fatally skewed toward the Democrats, America was fundamentally a “center-right country” eager for ever lower taxes and ever smaller government.

Early in the evening, anchor Megyn Kelly and commentator Tucker Carlson even made a lackluster effort to harp on the auto bailout and the Benghazi killings, two so-called issues we will never hear about again. (The mainstream media pilloried Romney unfairly on the former issue while ignoring the latter, etc.) But it obviously didn’t make them feel better. This was around 9:30 Eastern, when Pennsylvania and Wisconsin had already been called for Obama and the writing was on the wall in numerous other states. Those things were already the fading flowers of youth, nostalgic reminders of that lovely week in early October when Romney seemed to be leading but probably wasn’t.

“Oh, there’s a subdued feeling to this, if you’re a conservative this evening,” pronounced former George H.W. Bush speechwriter Peggy Noonan during her celebrity cameo, which was one of the most entertaining segments of this peculiar variety show. I’m actually not being facetious. I have a soft spot for Noonan, probably just because she’s educated and speaks in complete sentences and looks like exactly the kind of society lady who’d be a hoot to talk to if you were trapped at the wrong kind of party.

Besides, Noonan has more of a capacity for introspection than most of the horror-show talking heads on Fox, and suggested, pretty much of her own volition, that Republicans had to ask themselves some tough questions after this defeat. Mind you, she also sniffed, with her perfect finishing-school diction, that the Democrats’ “war on women” rhetoric amounted to “rustling up passions about things that people didn’t have to be worried about.” OK then, Peggy – not so huge on the whole “Our Bodies, Ourselves” thing! I’m pretty sure, however, that when she described the Obama campaign strategy as “driving a stake through the heart of Mitt Romney,” she was expressing grudging, ladylike admiration.

Thing is, Peggy Noonan is pretty much Lorenzo de’ Medici compared to Charles Krauthammer, whose leathery, undead visage appeared several times to urge the GOP not to engage in unproductive “soul-searching” and indeed to do more of everything terrifying they’ve been doing all along. Looking as if he’d just eaten a urinal cake, and bearing a striking resemblance to the plastic-surgery-impaired gay supervillain played by Javier Bardem in the new James Bond film, Krauthammer was Fox’s begrudger-in-chief, insisting that Obama won by going “very small, very negative” and would “slide through a second term” with no mandate. He made no effort to conceal his scorn for the “Northeastern liberal” Romney: “That’s not where we’re going.” A return to virile, Reaganite conservatism could be found on the “deep Republican bench,” which had sat out this election for unspecified reasons (that had nothing to do, clearly, with Obama’s popularity or political aptitude).

Unsurprisingly, Fox was foot-draggy throughout the evening on calling swing states and major Senate races, even before Rove tried to make the network backtrack on calling the entire election. My Twitter feed was full of news about New Hampshire and Colorado and Elizabeth Warren and Claire McCaskill that went ignored while Rove held up magic-marker charts about relative trends in exurban counties in northern Virginia or southwestern Ohio that he insisted would save Romney’s bacon. I can think of lots of adjectives one could use to describe Rove, most of them unflattering, but I honestly never expected to see him become the most boring person on Fox News Channel.

If you didn’t get to see it, Rove’s attempt to overturn Fox’s 11:15 P.M. call of Ohio and the election was completely nuts. First of all, co-anchors Kelly and Bret Baier were caught by surprise when a graphic went up announcing that Obama had been reelected. You could almost feel the disapproval emanating from Brit Hume, who may be a right-winger but is a genuine newsman and a TV professional. Then Rove, getting increasingly hot under the collar, began to protest that unnamed sources in the Romney camp weren’t happy about this, and that the president’s margin in Ohio was disappearing. This led Kelly to wander through a backstage corridor with a cameraman in tow, like a character in a backstage drama or reality show, in order to confront the statistics wonks at the “decision desk,” or at least to escape from Rove’s blather about whether the outstanding votes from Hamilton County, Ohio, were or were not from the city of Cincinnati.

In his new role as commentator rather than anchor, Brit Hume mostly came off like an actual grown-up, if an embittered one. He was clearly surprised that all those swing-state polls showing Obama leading turned out to be correct, but had the decency to admit it, and made other real-world points as well. Conservatives have long believed they were in the ascendancy, he said, but this outcome “tells us something about moderates: A lot of people who call themselves that are actually liberal, more liberal than many of us thought.”

During a brief and entirely incoherent video interview from her home in Alaska, Sarah Palin pronounced Obama’s reelection a “catastrophic setback” and said something about the Founding Fathers. She had an American flag jammed up against her fireplace and an odd, doggy-looking new hairdo, and appeared crazier than ever. Bill O’Reilly announced “traditional Americans,” who “do things for themselves,” may now belong to the past, and the new attitude is “I don’t want to do it, I want them to do it for me.”

One-time Democratic pollster Pat Caddell suggested that the Republicans now have a branding problem similar to the one that doomed the Whig Party in the 19th century, and that they need to attract moderates and minorities in order to survive. That sounds convincing, but people have been saying that for decades, and there’s no reason to believe that another narrow defeat will compel any major intra-party change. After Karl Rove had been beaten back into his chair and petulantly accepted reality, he mumbled that perhaps Obama had won the battle but lost the war. First of all, as Turd Blossom should know, that’s the kind of mealy-mouthed truism uttered by losers. Second of all, he’s partly right; we just don’t know how much. Obama won a big, bruising battle, and now has a brief and limited opportunity to assert leadership. But we just spent an entire year and $2 billion to end up with the same president, the same House and the same Senate. That sounds a lot like everybody losing, but at least Mitt Romney and those who financed him and pumped him full of hot air lost most of all.