Will Rove still be boss? 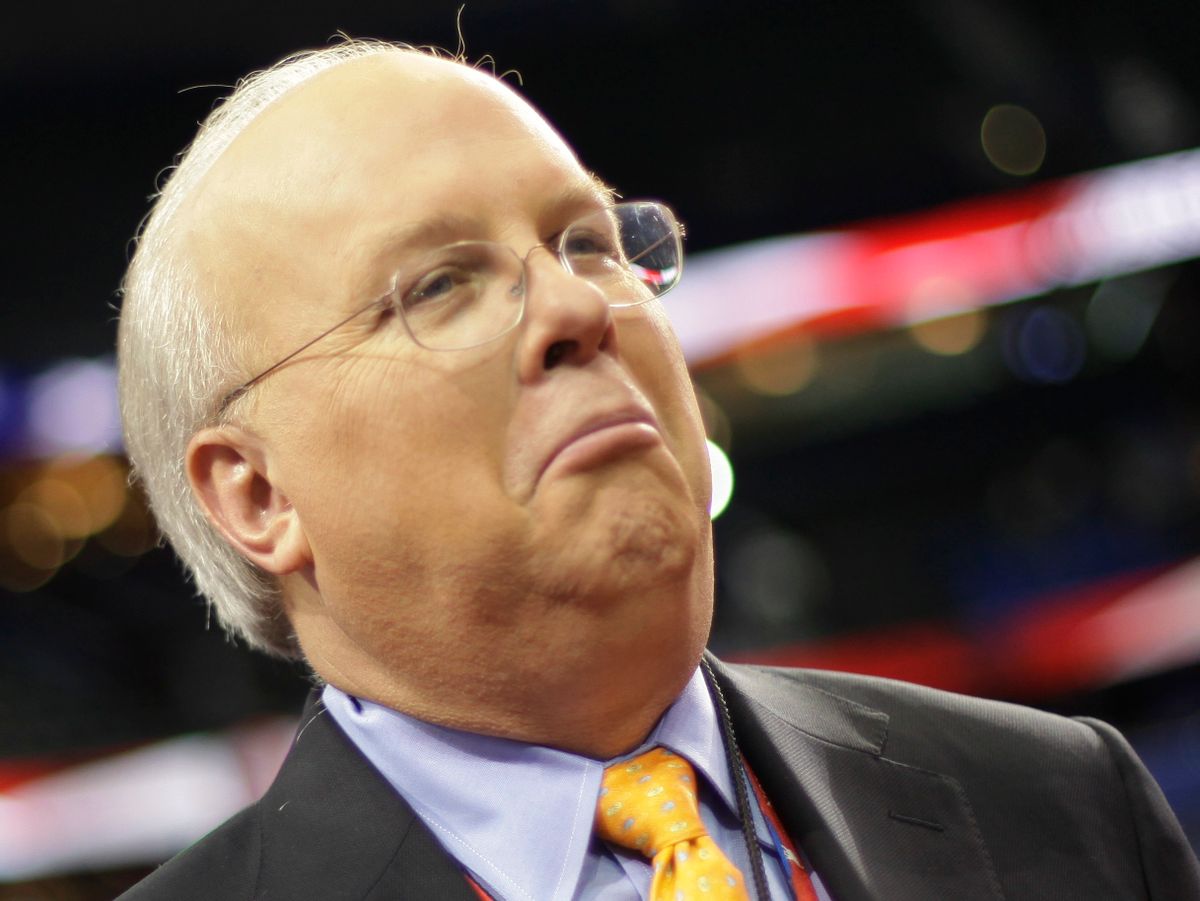 Mitt Romney wasn’t the only big loser last night. For Karl Rove, the coup de grâce came in the hour just before midnight.

It began at around 11:18 p.m., when Fox News called the election and posted its gaudy graphic: “Barack Obama Re-elected President.” Brit Hume, Megyn Kelly and a host of pundits offered up brief postmortems. Even the house organ of the Republican Party had conceded.

But then, abruptly, at 11:25, the narrative changed dramatically. “I have great respect for our decision desk,” said Fox’s Chris Wallace, “and I can see that they’re very happy [at Obama headquarters] in Chicago, but I have to tell you that the Romney camp has real doubts by the call that has been made by us and by other networks.”

Enter Karl Rove — Machiavellian GOP party boss, master numbers cruncher, and Fox News analyst — to challenge the verdict that everyone had anxiously awaited. Wallace got right to the point and asked Rove if he thought Ohio was locked up for Obama.

“We’ve got a quarter of the vote,” he explained. “Now remember, here is the thing about Ohio. A third of the vote or more is cast early and is won overwhelmingly by the Democrats.”

Rove insisted that calling the election was “premature.”

“So, maybe not so fast, folks!” Wallace said.

The unthinkable had just happened. Fox had called the election for Obama, but Karl Rove, its Svengali-like analyst, had just disputed his own network’s call.

There was an uncomfortable moment of dead air.

To resolve the issue, she hiked, on camera, all they way back to the analysts’ bullpen where the Fox decision desk was located. There, several unidentified analysts confidently assured her they had done their homework, crunched the numbers and explained there was no way Romney could take possibly Ohio. They were 99.95 percent certain. They were not backing off. Too many of the remaining precincts that were unreported were in heavily Democratic precincts.

Next, Fox brought on conservative pundit Michael Barone, a pal of Rove’s who had predicted a Romney victory and who is, in Rove’s words’ “the smartest guy in America when it comes to precinct results” to set him straight.

By this time, Rove was effectively disputing not just Fox News, but all the major news outlets in the country that had called the election for Obama. It was nearly midnight. The spectacle had dragged on for 40 minutes, providing an unparalleled spectacle of schadenfreude for Democrats: Karl Rove, stricken, like Humpty-Dumpty after the fall, as Barone patiently explained to him, as one might talk to a child, that Obama really had won Ohio — and the election.

Ultimately, it was left to Fox’s Bret Baier to make a feeble excuse for the chastened Rove. “Maybe we got you a slow computer,” he offered weakly.

Rove’s defeat did not come from want of trying. Throughout the entire campaign, on the surface, he played the lofty pundit pontificating for Fox and the Wall Street Journal as if he had no role whatsoever in the campaign. But whenever one looked closely beneath the surface, one found the Mark of Rove. Under the radar, via his surrogates in the Romney campaign, Boss Rove orchestrated massive, multimillion-dollar political ad campaigns that inundated the swing states with countless ads funded by his super PACs and “dark money” groups. He drummed up narratives portraying Obama as a latter day failed, weak Jimmy Carter, and reawakened paranoid fantasies that suggested America still lived in the aftermath of 9/11, cringing in fear of the terrorist threat. In more than 30 states there were attempts at voter suppression — Jim Crow 2.0 -- in one form or another, a strategy Rove had begun to employ by 2004. In Ohio, Republican Secretary of State Jon Husted, who had worked on Rove’s Ohio campaign in ’04, did everything he could to limit early voting. Nathan Sproul, a former Rove operative, launched nationwide schemes to disenfranchise Democrats, but was investigated by authorities for electoral misconduct and voter registration fraud. And various electronic voting machine companies were suspected of positioning themselves to rig the vote.

But in the end it was all for naught. Vigilant Democrats, often helped by the courts, had rebuffed him. Astoundingly, no one was cowering in fear of Boss Rove.

What went wrong? For Rove, just about everything. Throughout the entire campaign, the bitter division between the GOP establishment — Rove and his cronies — and the Tea Partyers severely limited his power. Rove’s inability to oust Missouri senatorial candidate Todd “illegitimate rape” Akin played a key role in allowing the Democrats to retain control of the Senate. Mitt Romney’s attempts to straddle the two wings of the party reduced him to an Etch-A-Sketch candidate who did not have a clearly defined narrative. GOP efforts at voter suppression failed to subdue the growing Hispanic vote for the Democrats — a demographic time bomb that will only worsen for Republicans. And ultimately for Rove, running the party by remote control, playing pundit while he secretly pulled the strings, had its limits.

What did Rove get out of it? One can only wonder how much money he made from a campaign in which he controlled the purse strings for hundreds of millions of dollars. What is certain is that it is unlikely that he will ever be forthcoming.

But in the final analysis, it is also certain that the election brought Karl Rove a spectacular defeat. After all, it is unclear what it means to be boss of a political party that is so bitterly divided. Already, Rove and his associates have begun castigating Tea Party candidates such as Todd Akin, Richard Mourdock in Indiana, and others as not ready for prime time. For their part, Tea Party billionaires such as Sheldon Adelson and the Koch brothers may well regret joining forces with Rove at all. Such wounds will not be healed overnight.

Does this mean Karl Rove is gone for good?

Not at all. It is worth remembering Rove has been written off before. In 2007, he was forced out of the White House in disgrace, having narrowly escaped indictment, the target of two of the biggest scandals in the Bush-Cheney era, having barely escaped indictment. The next year, his patron, George W. Bush, left the presidency with a 22 percent approval rating, the lowest in the history of the United States. The Rove brand was tainted irrevocably. Or so it seemed.

All of which means, when it comes to Karl Rove, the Democrats had best play by Chicago rules. “That means when he is dead, you put a stake through his heart,” explained one Democratic operative. “Then you put a bullet through his head. You pour gasoline on him and set him on fire. Then you kill him again. Because he’ll be back.”