As a candidate, Obama is a brilliant orator. As a president, he falls silent. Will he be different this time? 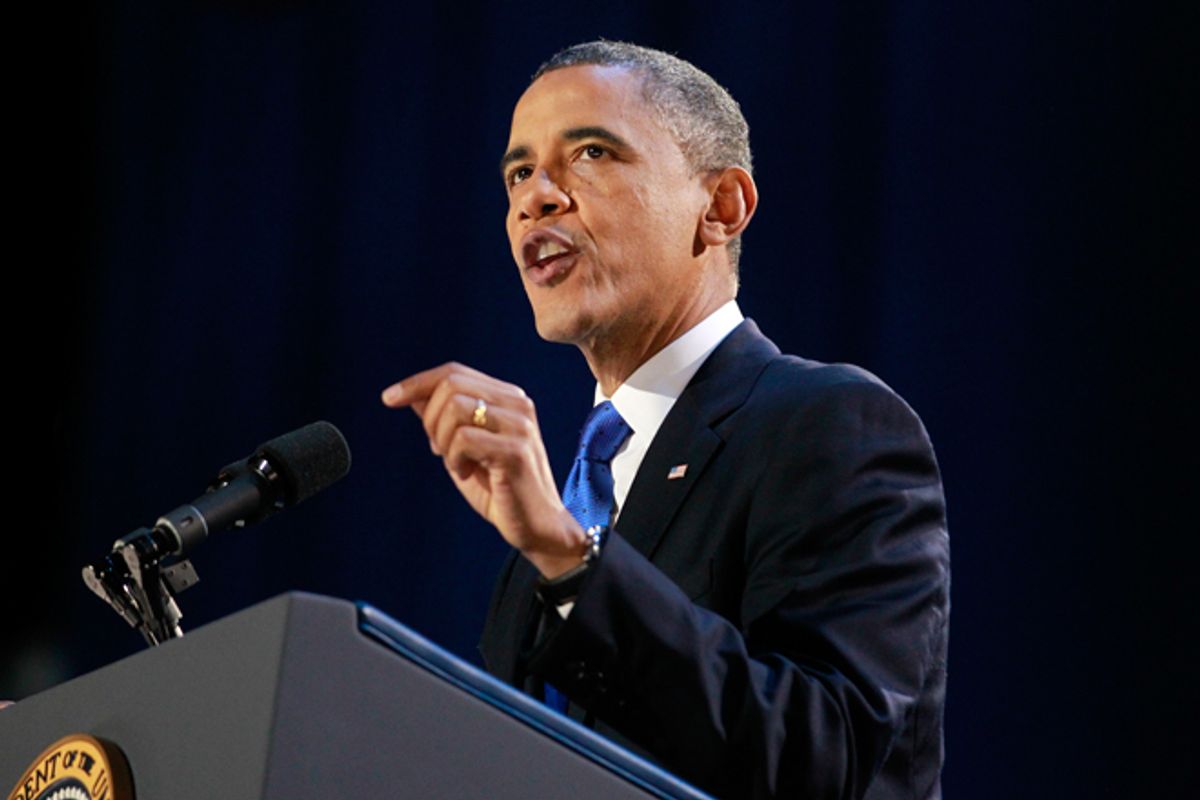 In 2008, I was not “in the tank” for Obama. I was a Clinton supporter in the primary, and thought Obama was too inexperienced to be a good president. Back then I had just finished working with incarcerated and at risk kids in Philadelphia and it frustrated me when my friends would talk about Obama like he was magic, like he could wave a wand once he was elected and fix the myriad problems facing the country. I thought that people who used terms like “post-racial” should be forced to work a few days in the prisons that I had just burned out on. But I recognized that this was a historic election and I wanted my 2-year-old son, Noah, to be a part of it, even if his memories of it wouldn’t be clear ones. So I took Noah to see all the candidates: Hillary Clinton, Sarah Palin, Joe Biden. (We would have gone to see John McCain, but they wouldn’t give us tickets to the event because we weren’t registered Republicans.)

And I took him to see Barack Obama.

We saw him two blocks away from a GED program where I was still teaching kids who had dropped out of high school.

And, oh, wow. When the man spoke I forgot all the practical reservations I had about him, I forgot all the skepticism that I had toward my friends’ lofty claims about what he could do. When he spoke, it was hypnotizing. Inspiring.

I had been awed by his 2004 keynote speech at the Democratic National Convention, and his speech on race at the Constitution Center in Philadelphia, and his acceptance speech for the Democratic nomination. Watching him on TV, I could see he was a great public speaker. But seeing him in person made me realize he was exceptional. You could see why he was able to capture the imagination of so many people. You could understand how his voice inspired so many otherwise smart people to be so stupidly hopeful about what he would accomplish as president.

And then he won the presidency, and that voice went away.

In the wake of his 2008 election, about a million articles were written about how he could not be the same man he had been on the campaign trail now that he was president, that he would have to put away the soaring speeches and inspirational posturing and become a “serious” president. So spoketh the punditry and apparently President Obama and his advisers listened. It’s like someone read a Dick Morris column and sold it to the president as gospel because Barack Obama, the greatest American political orator of our (or at least my) generation, suddenly seemed unwilling or unable to communicate what he was trying to do.

At a time when the country was reeling, when the economy had bottomed out, when people were losing jobs and houses at a horrifying rate and were desperately looking for any kernel of hope and inspiration to hang on to, the man who had proved so adept at providing that hope and inspiration, the man who, for that very reason, had been given the responsibility of leading our nation, well, he shut up. Some might argue he shut down.

In his absence, people like Limbaugh and his cadre of opportunistic wretches stepped in, men and women who prey on the sadness and fear of those who are most in need of inspiration and most scared of the future.

It was left to Obama’s supporters to explain to their skeptical friends and loved ones what Obama was busy doing and to combat the claims of the increasingly vitriolic cable news and talk radio hosts. How many times in the last year or two have you gotten a Facebook message or email from a friend explaining all the things President Obama has accomplished while in office? Even during this 2012 campaign it was Obama’s surrogates who best explained his job performance, it was Michelle Obama and Bill Clinton who made the best cases for why this silent president deserves another chance. As this campaign wore on and Obama failed to use the prodigious gift that he was so willing to display back in 2008, many (including myself) believed that this was a man who didn’t want to be here. His silence gave the impression of a man who used all of his immense skill to make history but was unhappy dealing with the thankless work that came after.

So if you managed to stay up very late last night, you got to see and hear something pretty special: Not the reelection of Barack Obama, but the return of Barack Obama, the man who can blow the doors off a barn with his voice and make a generation of skeptics believe his words. I haven’t been as moved by an Obama speech since that cold morning four years ago when I stood holding my 2-year-old son, listening to him in a parking lot in North Philly.

In my favorite part of last night's speech, President Obama returned to the message of hope from 2008, something that for many seems to still be in very short supply:

“I have always believed that hope is that stubborn thing inside us that insists, despite all the evidence to the contrary, that something better awaits us so long as we have the courage to keep reaching, to keep working, to keep fighting.”

Perhaps the election results have helped Obama find his voice again. Maybe, as a second-term president, he will be less afraid to use it, and less concerned about how he should look and sound. We need 2008 Barack Obama, we are still on unstable ground, we still have a heaving economy, a population divided by social issues and a widening gap between rich and poor. There is nothing wrong with wanting to be inspired by our leaders, to be motivated by their words, to be dazzled by their ideas. Great politicians use their talents to win votes and get elected, great leaders use their talents to win people over and sell their big ideas. This second term is a chance for Obama to prove himself: Is he simply a great politician or a truly great leader? Last night, for the first time in a long time, I have hope.