The big square-state story isn't Obama's victory. It's the rise and rise of the Democratic activist base 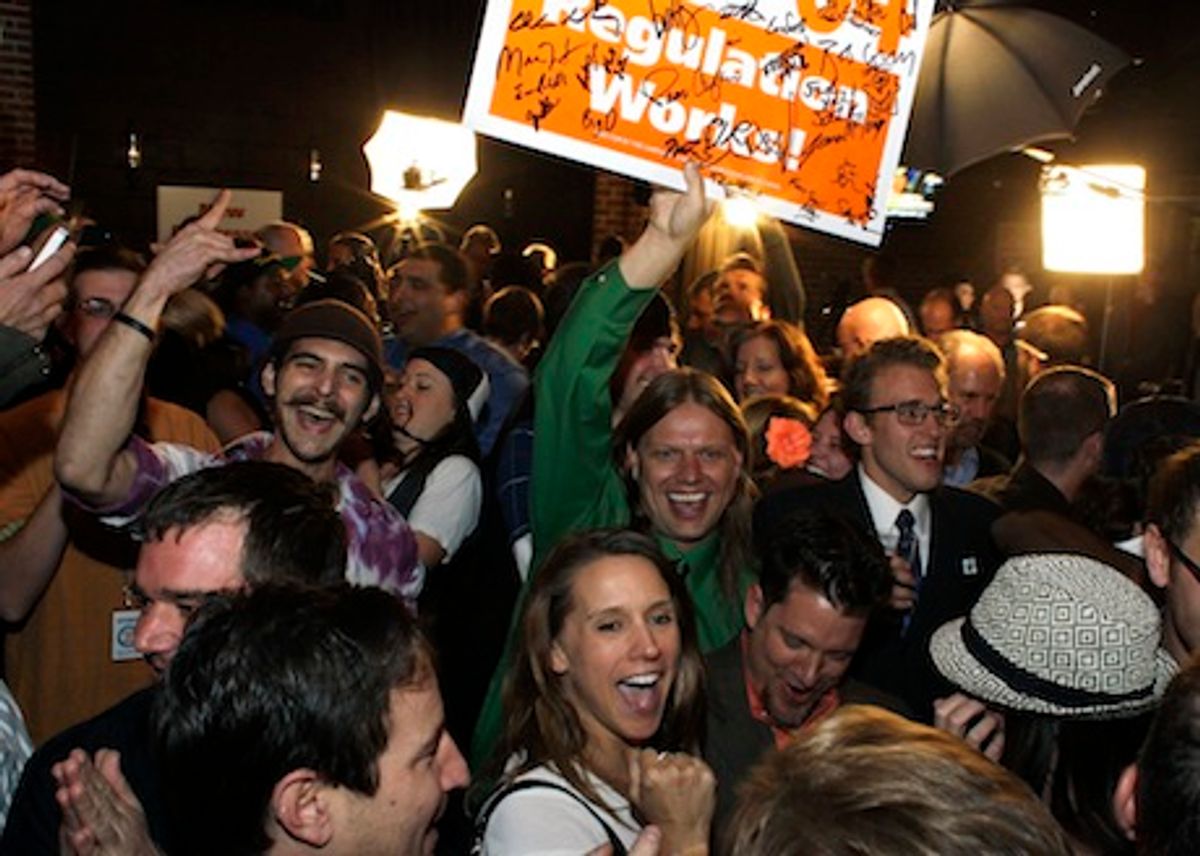 On a watershed day with much to celebrate, no state exemplifies American politics' lightning-fast progressive earthquake more than Colorado. And here's the part of that story the media won't tell you about: The presidential election results from this formerly deep red state comprise only a minor part of the tectonic shift.

Sure, President Obama did effectively use his massive campaign war chest to eke out a much-needed victory here, but that not-so-surprising result is not the big news in a region whose demographics and population growth make it a vision of America's political future. Instead, the big square-state story is that a once-dominant Republican Party is utterly marginalized, an autocratic, top-down Democratic Party establishment is at the mercy of its activist base, and the state's corporate elite are no longer able to fully dictate political destiny.

In the statehouse, Democrats reclaimed both the House and state Senate, despite a furious campaign by the education privatization movement to defeat key progressives. Though Democratic Gov. John Hickenlooper last night performed his obligatory role as party cheerleader, the word for months in the state's political circles was that the last thing this first-term conservadem wanted was a Democrat-controlled Legislature. That's because under such conditions, he will no longer be able to rely on split-control gridlock to prevent genuinely progressive legislation from reaching his desk. But conditions were obviously out of his control. Same thing for the GOP: Voters' rejection of their conservative candidates means the best-known Republican in Colorado's Capitol is Secretary of State Scott Gessler, who is now a target of a major criminal investigation.

When it came to ballot measures, the results were even more stunning. Despite Hickenlooper, his Democratic predecessor Bill Ritter and the sitting Denver Democratic Mayor Michael Hancock leading the fight to continue the Drug War, Colorado voters passed a measure legalizing marijuana for recreational use. So crystal clear were the results that Colorado's Republican attorney general, committed drug warrior John Suthers, has vowed to implement it.

And maybe most incredibly of all, despite Hickenlooper's ardent push for more hydraulic fracking throughout the state and despite a massive opposition campaign by the fossil fuel industry, the city of Longmont voted overwhelmingly to fully ban the natural gas drilling process within its boundaries.

In the context of history, these results could represent nothing short of a quiet political revolution. Colorado, after all, has long been the stalwart conservative anchor in the Intermountain West, a locale whose politics have been dominated by a network of old economy aristocrats in the fossil fuel and telecom industries, nouveau riche moguls from the information economy, right-wing newspaper moguls and career politicians -- all of whom are used to driving the public policy car rather than serving as speed bumps.

That network still exists, of course, and as evidenced by Sen. Michael Bennet's (D) ugly path to power in 2010, it still has real power. But its power is clearly dwindling, and if it can be challenged in a place like Colorado, it can be challenged -- and ultimately, defeated -- anywhere in America.