Romney's concession speech was not gracious

Pundits rush to praise the GOP candidate, but his behavior was petulant and sullen 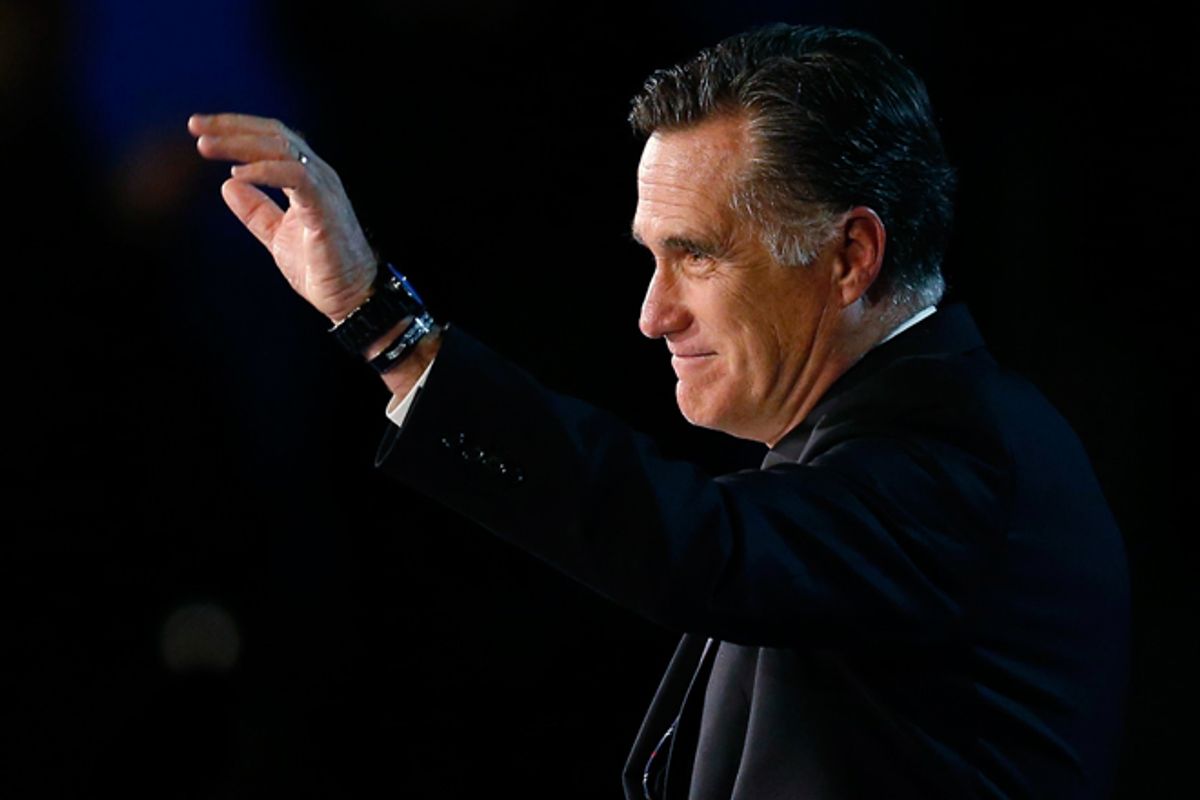 It is a venerable tradition in American politics that no matter how ugly a bloodbath the campaign that preceded it may have been, on election night, the defeated candidate steps up and gives an elegant concession speech, thanking his supporters and pledging his loyalty to the victor. In return, the winning side politely vows to reach across the aisle, and lauds the loser's "graciousness," thereby assuring that no one can accuse the victorious side of anything resembling gloating.

Sure enough, after Mitt Romney's five-minute parting words Tuesday evening – which actually came in the early hours of Wednesday morning – the governor was perfunctorily summed up in the punditsphere by the adjective of choice: The "Today" show declared that Romney's speech was a "short but gracious" end to his six-year quest for the White House. Our own Salon staff called it a "gracious" speech. Even BuzzFeed called it "gracious," pointing out its most "conciliatory and statesmanlike moments." New York magazine, meanwhile, said that Romney "concedes with class." Now, it may seem nitpicky to mention this while the door is still hitting the guy's ass on his way out, but are you kidding me?

Take a journey back in time with me: The Associated Press, NBC and CNN called it for the incumbent president at around 11:15 p.m., filling exhausted voters on the still-battered East Coast with the naive hope that they could go to bed early. Instead, they, like the rest of the world, would have to wait nearly an hour and 45 minutes for the former governor to take the stage. Why? In part because even as Fox News analysts were admitting, "We're actually quite comfortable with the call in Ohio," and the Obama campaign had pulled the trigger on its record-breakingly forwarded victory tweet, the Romney campaign was still hanging on, perhaps, because as Daily Kos joked, they were waiting for their vote-flipping-machines results to kick in.

Romney was also no doubt dragging his heels because, as he confidently told journalists earlier Tuesday, "I just finished writing a victory speech. It's about 1,118 words." He added, just to drive the point home, "I've only written one speech at this point." Barack Obama, meanwhile, aware of how tight the race was right up to the end, had told reporters, "You always have two speeches prepared because you can’t take anything for granted." So tell me, who in this scenario seems like the gracious man, and who seems like a hollow tower of hubris? I'm asking for a friend. And that friend is AMERICA.

It's true that when Romney took to the stage at last in Boston, right before 1 a.m., he didn't kick over the podium, rip off his shirt and throw a chair into the audience. He didn't spend the long minutes between victory being called for Obama and his acquiescence of the race hopping on a plane to Chicago so he could bum-rush the president's victory speech. And he may not have spent that time holed up in a bunker with his advisers, making women cry.

Instead, he came out before the nation, put on his game face, and expressed his gratitude. He said, "We can't risk partisan bickering and political posturing." Good for him. He also sighed that his wife, Ann, "would have been a wonderful first lady," and, in a statement that would not have been out of place coming from a partner at Sterling Cooper Draper Pryce, thanked his "sons for their tireless work on behalf of the campaign, and … their wives and children for taking up their slack as their husbands and dads have spent so many weeks away from home." Seriously.

If you think that's the epitome of Republican class, contrast Romney's defeat speech to that of John McCain, in 2008. Whatever you think of McCain, he didn't sit around stewing forever before getting on the horn with his opponent. And when he stood before his supporters, he shushed the members of his constituency who tried to boo their new president, and instead offered Obama his "respect for his ability and perseverance" in "inspiring the hopes of so many millions of Americans who had once wrongly believed that they had little at stake or little influence in the election of an American president." McCain said he "admired" Obama and "applauded" him, and he ended by saying, "I hold in my heart nothing but love for this country and for all its citizens, whether they supported me or Sen. Obama."

Romney, on the other hand, merely managed to grunt out that the Obama campaign "deserves congratulations" and "I wish all of them well." He then moped that "I so wish that I had been able to fulfill your hopes to lead the country in a different direction, but the nation chose another leader," and ominously declared that "Ann and I join with you to earnestly pray for him and for this great nation." It seemed as tired and halfhearted as a little league player muttering, "Good game. Good game. Good game," to the winning team before heading to the showers.

He wanted it to be "different," and he's praying for you, America. That is not "gracious." What it is instead is a pretty typical Romney, a man who would arrogantly refuse to entertain the notion of defeat and then grind in his heels and refuse to accept it for as long as possible. A man who would pout that his wife would have made a kickass first lady, who thanks men for their tireless work and "wives" for picking up the slack. That was your glimpse, Tuesday night, of what your President Romney would have looked like. And maybe it doesn't sound gracious to say so, but thank God that's the last look we'll have.