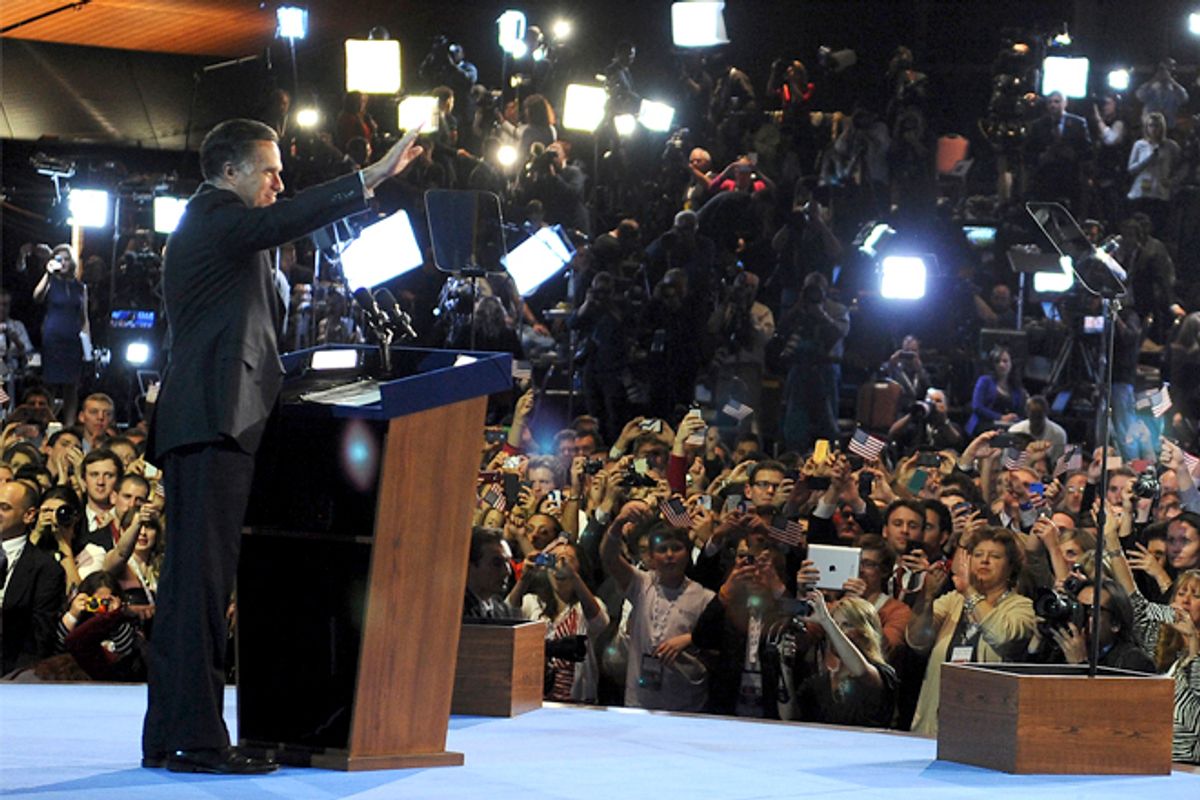 The presidential election got called for Barack Obama at 11:15 P.M. EST, which is a whole lot earlier than many of us would have dared hope — and it turned into another endless election night in front of our televisions anyway. If you’ve been watching since the first polls closed way back at 6:30 P.M. it already felt like forever when Obama was declared the winner. Then you had to wait for a whole other forever — an hour and 45 minutes — until Romney finally conceded. That amounts to five hours of Chuck Todd and John King fondling their outsize touchscreens and “magic walls," plus another hour of Karl Rove fondling — or was it manhandling? — Fox News.

Last presidential election, CNN got mercilessly ribbed for projecting “holograms” of its staff into its studio. This year the network promised a “virtual Senate,” an effect that all but had its staffers walking around in one of those Taiwanese viral videos. But the “virtual Senate” barely appeared. CNN and the other networks went surprisingly low-tech, sticking mostly with the “Minority Report” walls required on election night. The nets even eschewed the standard social media bells and whistles: Where were the hastily assembled tweets scrolling chaotically underneath every screen? Turns out having to project actual data at the bottom of a set gets @Foxnewsdrools booted from MSNBC’s scroll.

Even more old-fashioned: CNN, NBC and MSNBC doubled down on infrastructure like, you know, ice skating rinks and building decoration. (Also, eye makeup and booze: Rachel Maddow was rocking some smoky eye and everyone on Twitter was convinced Diane Sawyer had knocked back something strong all night long.) NBC drew a huge electoral map on the ice skating rink at Rockefeller Center, which they colored in at appropriate moments. After some early prime screen time, the rink got relegated to the margins, probably because putting an electoral map on an ice skating rink is a silly thing to do. Especially when NBC has an indoor map that actually moves and that Chuck Todd can draw green lines on without the help of a Zamboni.

Not to be outdone, CNN roped the Empire State Building into this fracas, running red and blue lights up the tower to indicate the status of the Electoral College. Because it was such a close race until California blew the electoral numbers apart, this was not a graphically interesting or helpful way to relay information. Besides, if it was, New York City already would have been doing it.

It was Fox, the network with the least tech (unless you include their seriously yellow font detailing or Megyn Kelly’s ongoing impersonation of a Katharine Hepburn character come to life) that had the most fireworks — and waterworks. Pretty early on in the evening things got real hangdog over there (check out sad faces of Fox). Because wallowing is more becoming than gloating (if you need proof, see: MSNBC all night) the crew over at Fox really let themselves in for it — all except Karl Rove, who stayed on message all night long. After all the networks, including Fox, declared that Obama had won Ohio (except CNN, which took its time) Rove did his best to bully Fox into backing off its call. Mitt Romney was going to get Gore-d out of an election while Rove has access to a cable news network.

The resulting fracas — which included Kelly wandering through the studio to talk to Fox's own wonks; everyone at Fox very apologetically explaining to Rove that they were sorry, really sorry about being members of the reality-based community; Florida and Colorado and Virginia flipping for Obama while Rove went on and on — was the high-drama mark of the night. It made for such surreal, zany television, I hope "The Newsroom” restages it exactly, but makes sure to flesh out the part where the Romney campaign was apparently watching Fox News too, agreeing with Rove, and unwilling to concede until he’d been proved wrong.

Nearly an hour and a half later, at 12:55 P.M., Romney admitted defeat. MSNBC had miked the room he conceded in so it sounded like all of 10 people were clapping for him (CNN made it sound like more). Finding a way to put that unctuous smile to one last use anyway, Romney thanked his supporters, his wife, his vice-presidential candidate. He thanked "my sons for their tireless work on behalf of the campaign, and thank their wives and children for taking up the slack as their husbands and dads have spent so many weeks away from home." (Thank you, you binders full of women, you.) He “believes in the people of America.” He is “concerned about America.” He and Paul left "it all out on the field." He and Ann are praying for Obama. “Thanks, guys,” he said, as he hugged his wife, who looked just as tired as he did. It wasn’t a great speech, but giving it seemed exhausting. He looked tired. At the very end, for just a couple minutes, Mitt Romney was just like us.