"American Horror Story" takes on the Holocaust with a Mengele-like storyline. Against all odds, it works 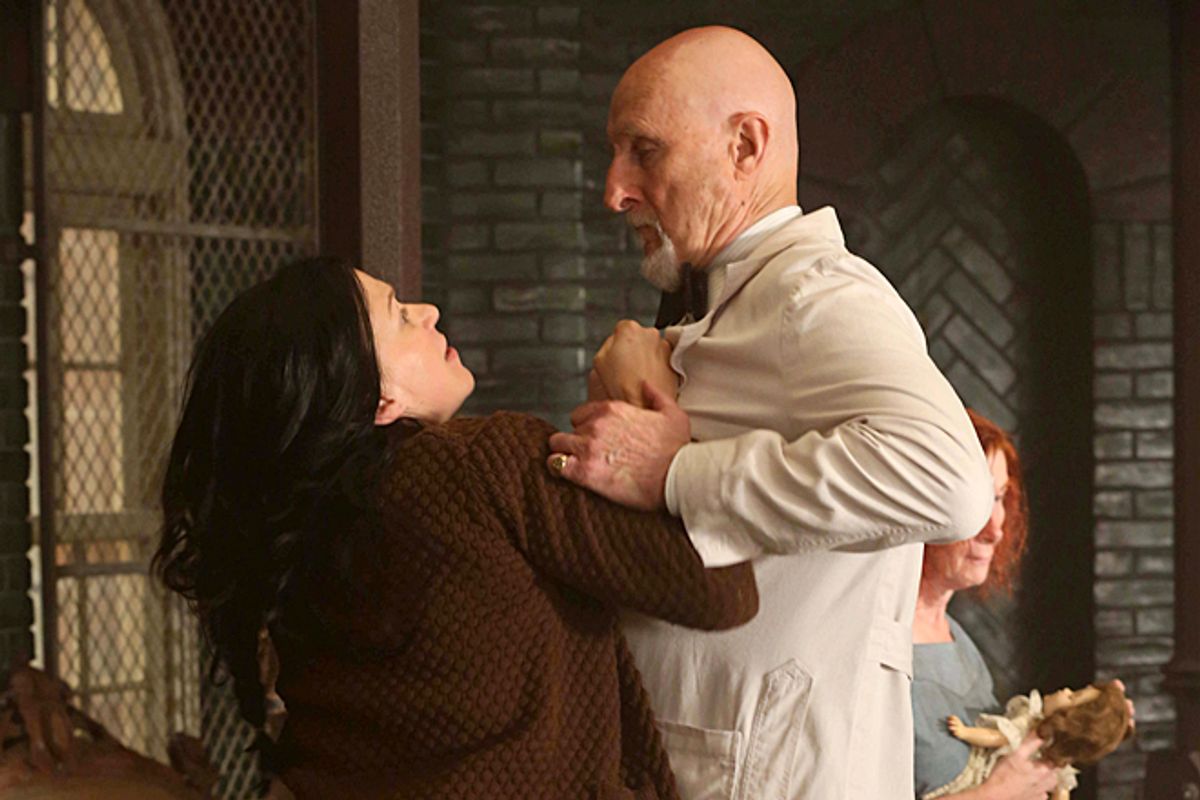 Of all the people I trust to assemble a fiction about the possibility that Anne Frank survived the Holocaust, Ryan Murphy is not high up on the list. Philip Roth? Fine. The guy who has made multiple episodes of musical television all but canonizing Britney Spears? I don’t know. But in last night’s “American Horror Story,” in which a woman who may or may not be Anne Frank got herself locked up in an insane asylum and — no half measures here — wrote to Kitty about it, that’s just what Ryan Murphy did. The results were wild, ludicrous, unconcerned with taste and propriety and, against all odds, fantastic. The Holocaust fits snugly into "American Horror Story's" purview.

In the episode’s opening scene, Franke Potente (“Run Lola Run,” the first “Bourne”) was locked up at Briarcliff for stabbing a man who had made anti-Semitic remarks at a bar. Upon seeing Dr. Arden (James Cromwell), the micro-penised sadist who has been conducting invasive, Dr. Mengele–style medical procedures all season, including chopping off Chloe Sevigny's legs, she immediately recognized him as a Nazi doctor who had worked at Auschwitz. Screaming and slapping him, she was dragged away as she belted out her name: Anne Frank. Anne, flashing the numbers tattooed to her arm, then told her story to Sister Jude, trying to convince her of Dr. Arden’s Nazi past. She had barely lived, married an American GI, and kept her survival a secret because by the time her diary was published, it seemed to her she could do more as an officially dead martyr than as a living person. Her story may be bogus, or it may not be. She’s locked up in the loony bin, but Sister Jude’s superior called Dr. Arden to tell him “they were on to him.”

“American Horror Story” used black-and-white faux-“newsreel” footage to stand in for Anne’s memories of a young Arden at Auschwitz. These flashbacks — Arden studying twin boys in a rail car, walking into a barracks where emaciated, shorn-headed women crowded in on bunks — were sound-tracked by that old-fashioned tick-tick-tick, whoosing sound newsreel film makes as it speeds through a projector. Why? These scenes were explicitly supposed to be Anne’s memories, moments at which there would have been no cameras present.

But this is the form audiences have come to expect “real” footage from the camps to take: black and white, flickering. These qualities establish a verisimilitude, not to what was actually happening in the camps, but to other portrayals of what was happening in the camps. It’s a false verisimilitude that seems more real than verisimilitude: If Anne’s flashbacks had been in color and with sound — if they had resembled memories — that would have been jarring, implausible, in poor taste. Instead, “AHS” manipulated the Holocaust imagery that has become so iconic it has a noise associated with it. And established horror iconography — which Holocaust imagery is, if it’s not just that — is “AHS’s” territory. It’s a series that’s reason for being is to rifle through such images, reanimate and reassemble them, like a Dr. Frankenstein of frightening tales.

“American Horror Story,” as its title makes clear, is dedicated to ransacking our collective consciousness for unsettling pictures, looming boogeymen. Over its two seasons it has demonstrated an extreme catholicism toward evil: any source will do, so long as it’s recognizable. There have been ghosts, fires, nuns, aliens, ax-murderers, crazy mistresses that hail from “Fatal Attraction,” possessed teenagers out of "The Exorcist,” myriad true crimes — not the least of which is aversion therapy for the “disease” of homosexuality — but there have been very few novel, sourceless monsters.

“American Horror Story’s” originality comes from its too much-ness, its gruesomeness, its willingness to juxtapose familiar frights in strange, flabbergasting ways, not from telling a yarn that you’ve never ever heard before. Nazis are high-ranking members — perhaps the highest — in our collective pantheon of demons, and Anne Frank’s story is too scary to tell around a campfire, which means both belong on "American Horror Story." The Holocaust is on another scale of horror from the “Poltergeist,” but there's room on this show for all nightmares.