We may be stuck with the electoral college, but a few simple reforms would drastically improve American democracy 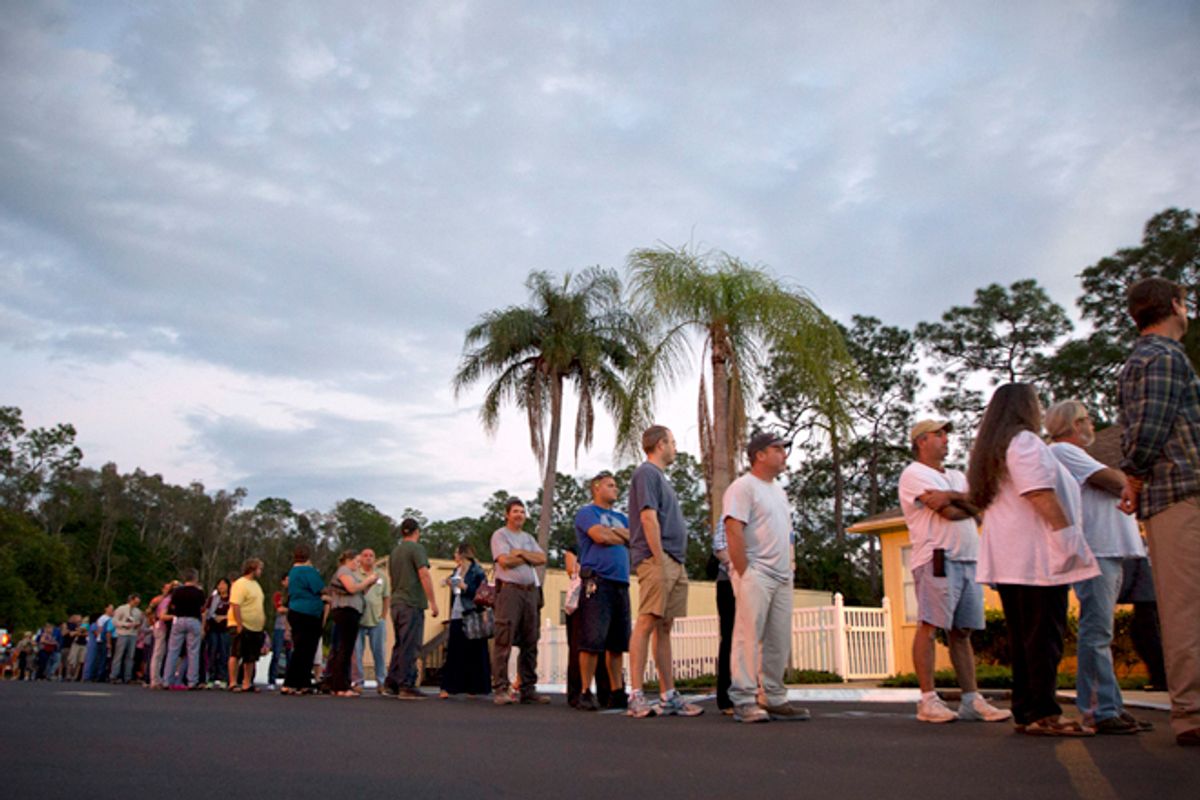 In a throwaway, seemingly ad-libbed line in his victory speech Tuesday night, Barack Obama noted the long lines many of his supporters had been forced to wait in in order to vote for him, and said, "We gotta fix that." And we do. We really, really need to improve the way Americans vote. It's embarrassing. So let's hope the president remembers that line and decides to act on it in his second term. If he does, I have some suggestions.

It would actually be quite easy -- logistically, not politically -- to "fix" American elections. There have been a million sober, bipartisan reports and plans to fix them that have been largely ignored. Paper ballots, universal or automatic voter registration, expanded nationwide early voting and stricter requirements for clear and concise ballots would solve many of the problems we saw this week. Lots of states already have most of these reforms in place. Most other Western nations have a much easier time of voting than we do and their systems are easy to copy and adapt.

Instead of sensible reforms, though, our last effort at "fixing elections" ended up being a rather useless bill that served mainly as a massive windfall to Republican-run ATM machine manufacturers, who produced billions of dollars worth of poorly secured voting machines that frequently break down and slow down the entire process even when running correctly.

One reason -- the primary reason, really -- elections haven't been fixed yet is that one of our two major political parties has the suppression of undesirable votes as one its primary goals. But this year outrage over that fact was loud and widespread enough to hopefully give measures to fix our elections more headwind than they've had since 2000, when a Republican president and Congress were forced to at least pretend to address the problems. If Republicans are going to try to quietly suppress votes locally, let's force them to vote against the right of every American to vote nationally.

If Obama wanted to, he could likely do quite a bit to fix elections even without going through Congress. But there could be means of accomplishing the most important reforms even with a Republican House. A reform bill could, theoretically, be sold as a sort of broad bipartisan reform effort, done in the name of cracking down on fraud. Universal registration actually eliminates many opportunities for fraud. (And clerical error.) Stricter national standards and impartial control of polling places and election officials could also be sold as a means of cracking down on urban "machine" political control. (Here's apostate conservative/Mitt Romney voter David Frum on the subject!) Obviously there won't be broad Republican support for measures to make it easier for people to vote, but there might be enough to pass an actually useful bill. Hell, pick up some Republican votes by adding an explicit "NO MURALS OF OBAMA IN POLLING PLACES EVER" clause. Do whatever gross politicking you have to to make voting easier and registration universal.

Then once we fix elections we can work on fixing all of our undemocratic institutions. It would be great to see politicians throw their support behind all or even some of the Center for Voting and Democracy's Fair Vote reform suggestions.

The president should obviously be elected by national popular vote, and it's outrageous that Wyoming has two senators and D.C. has none, but short of junking the Constitution, we're stuck with those sad realities for the time being. It's bizarre that there's not more outrage over the fact that the House will be majority Republican (likely until 2022) despite more votes being cast for Democrats, but unlike the existence of the U.S. Senate, this can be fixed without altering or amending our nation's archaic founding document. While I'd obviously most prefer a larger House with proportional representation and instant-runoff or ranked voting (and, sure, multiple member districts -- let's dream big!), we should at the very least stop allowing district drawing to be a partisan-controlled affair. (And, again, an anti-gerrymandering crusade could be sold as bipartisan -- fighting back against the extremists in both parties!)

If the president made these very important reforms one of his major domestic second-term priorities, and he managed to get almost any of them done, it'd fundamentally change the country for the better. It's the sort of legacy stuff second-term presidents dream of. All we need is to get to work before everyone forgets how awful voting was this year and moves on to something else.