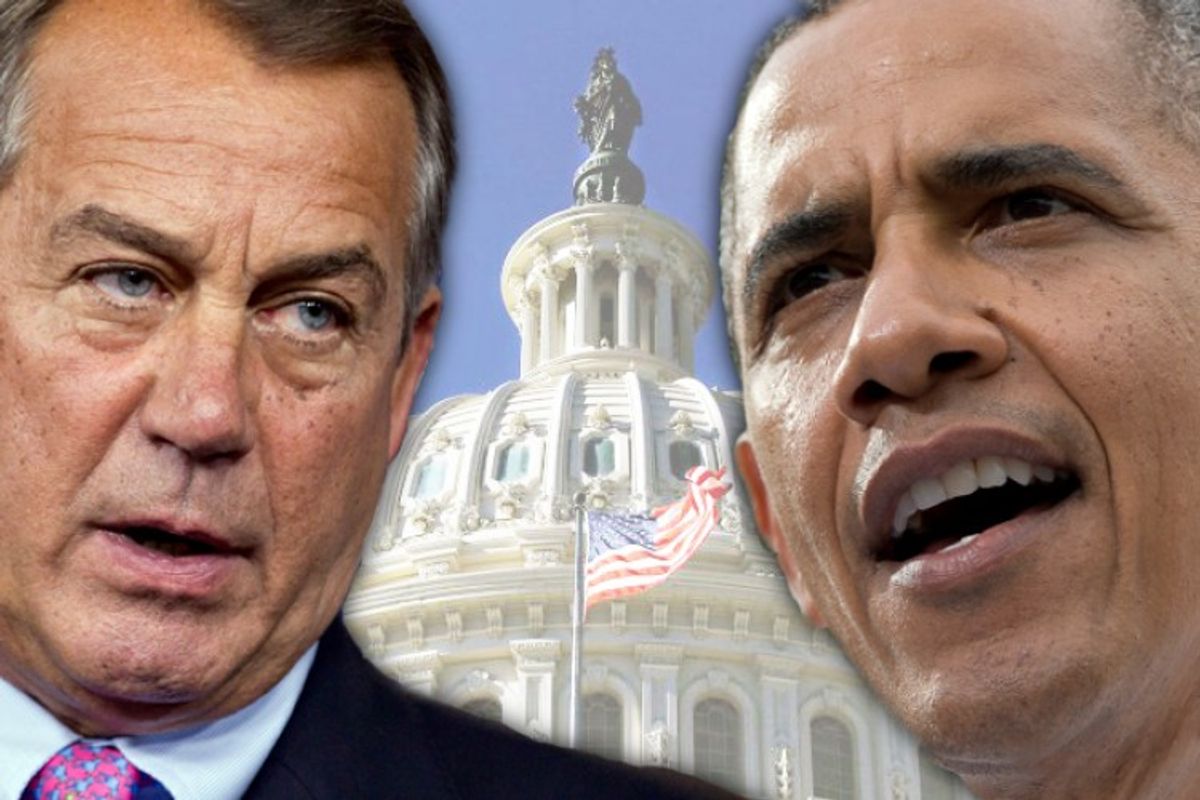 In the tense run-up to Hurricane Sandy, I clicked on one of those headlines that appears on the right side of the screen: “Civilization May Not Survive This, Economist Says.”

Once there, I knew I'd been had.  It was about … the public debt. It cited one Lawrence Kotlikoff of Boston University, one of America's most talented artificers, who “estimates the true fiscal gap is $211 trillion when unfunded entitlements like Social Security and Medicare are included.” Compared to that, what's a thousand mile-wide hurricane?

That the looming debt and deficit crisis is fake is something that, by now, even the most dim member of Congress must know.  The combination of hysterical rhetoric, small armies of lobbyists and pundits, and the proliferation of billionaire-backed front groups with names like the “Committee for a Responsible Federal Budget” is not a novelty in Washington. It happens whenever Big Money wants something badly enough.

Big Money has been gunning for Social Security, Medicare and Medicaid for decades – since the beginning of Social Security in 1935. The motives are partly financial: As one scholar once put it to me, the payroll tax is the “Mississippi of cash flows.” Anything that diverts part of it into private funds and insurance premiums is a meal ticket for the elite of the predator state.

And the campaign is also partly political. The fact is, Social Security, Medicare and Medicaid are the main way ordinary Americans connect to their federal government, except in wars and disasters.  They have made a vast change in family life, unburdening the young of their parents and ensuring that every working person contributes whether they have parents, dependents, survivors or disabled of their own to look after. These programs do this work seamlessly, for next to nothing; their managers earn civil service salaries and the checks arrive on time. For the private competition, this is intolerable; the model is a threat to free markets and must be destroyed.

This attitude is reflected in the nonsense of media discourse, nicely illustrated in October's vice-presidential debate, moderated by Martha Raddatz of ABC News:

Martha Raddatz: Let's talk about Medicare and entitlements.  Both Medicare and Social Security are going broke and taking a larger share of the budget in the process.  Will benefits for Americans under these programs have to change for the programs to survive?  Mr. Ryan?

Note that Mr. Ryan did not have to establish on his own that “Medicare and Social Security are going bankrupt.”  That claim was built into the question. All Mr. Ryan had to do was to assert his firm agreement. And Vice President Biden, when his turn came, chose not to rebut.

Can a federal insurance program go bankrupt? Of course it can't. Bankruptcy is a legal process for private citizens seeking relief from unpayable debts. How can the obligations of Social Security or Medicare ever be unpayable? These are public programs, not private companies. All the federal government has to do is to write the checks, pursuant to law. As for the size of the checks, it will be whatever Congress prescribes at any given time. Bankruptcy as a concept does not apply. So what are they talking about?  Lies and nonsense, nothing more.

Less easy to penetrate is the thick swamp of dogma thrown up by the economists who have provided a background chorus for the doomsayers.  Kotlikoff's $211 trillion is a nice example of this: the net present value of a discounted stream of projected federal deficits over (one suspects) an infinite future time horizon.  Or maybe only 75 years or so.  But who's counting? It's a big, big number, and the man spreading it about is a credentialed professor.  Must mean something, surely?

No, it does not.  For one thing, any such number needs to be placed in context – what fraction of total GDP, over the same horizon, are we talking about? That GDP number will be 10 to 20 times larger, so Kotlikoff's forecast doesn't tell you anything you didn't already know, by looking at present deficits in relation to present GDP.

Even that comparison misses the real point, which is that all balance sheets are double-entry propositions. Assuming it's a real number, and not made up, that $211 trillion liability must correspond, to the penny, to an asset. And that's the gain in expected future net financial wealth of the private sector, also discounted. Every one of those dollars, after all, corresponds to a bond, which will be owned by a person, a company or a bank. Big crisis? Not at all. At best, it's a curiosity calculation, of no practical importance.

Even worse, because more immediately read and followed by policymakers, are the Congressional Budget Office's baseline economic projections.  These combine mutually impossible events, leading to the prediction that the debt/GDP ratio will rise toward 300 percent of GDP by mid-century, while real growth and inflation chug along at 3 and 2 percent, respectively.  But if this were possible, why should anyone care?  In fact it's not possible; the CBO's deficits are driven mainly by assumptions about healthcare costs and interest rates that cannot happen. Healthcare cannot rise indefinitely as a share of GDP (and may have already stopped rising). And if interest rates returned to what CBO thinks of as normal the underlying economy would collapse. Luckily for us, the Federal Reserve won't do that. CBO should revise its assumptions;  if it did, the scare forecasts would go away.

Do we have budget problems? Yes: We spend too much on military hardware and wars; the talent, materials and technologies that go into that are wasted and cannot be used, say, to protect New York from storm surge. Our rich build too many mansions, thanks to their CEO incomes and their low tax rates;  letting the Bush tax cuts expire will usefully dent that purchasing power.

But Social Security, Medicare and Medicaid impose no such future burdens. They are transfers in current time. They meet today's commitments to seniors, survivors, dependents, the disabled and the ill – commitments they have earned through work – providing them with income and services at the expense of others also currently alive.  This any community can always do, to the full extent of its will and resources. The future has nothing to do with it.  Except that, from a moral point of view, it's useful for the young to learn that we are a community, in which working people take care of those who can't.

And that is what the Objectivists in Congress cannot stand. Our sense of community is an obstacle to their power.  And what they are determined to destroy, we must defend.  There is much more to be said, about disaster relief, food assistance, housing and other threatened programs.  But to begin, Congress should leave Social Security, Medicare and Medicaid alone.