The left is getting a bad rap for celebrating too hard. But we need this now 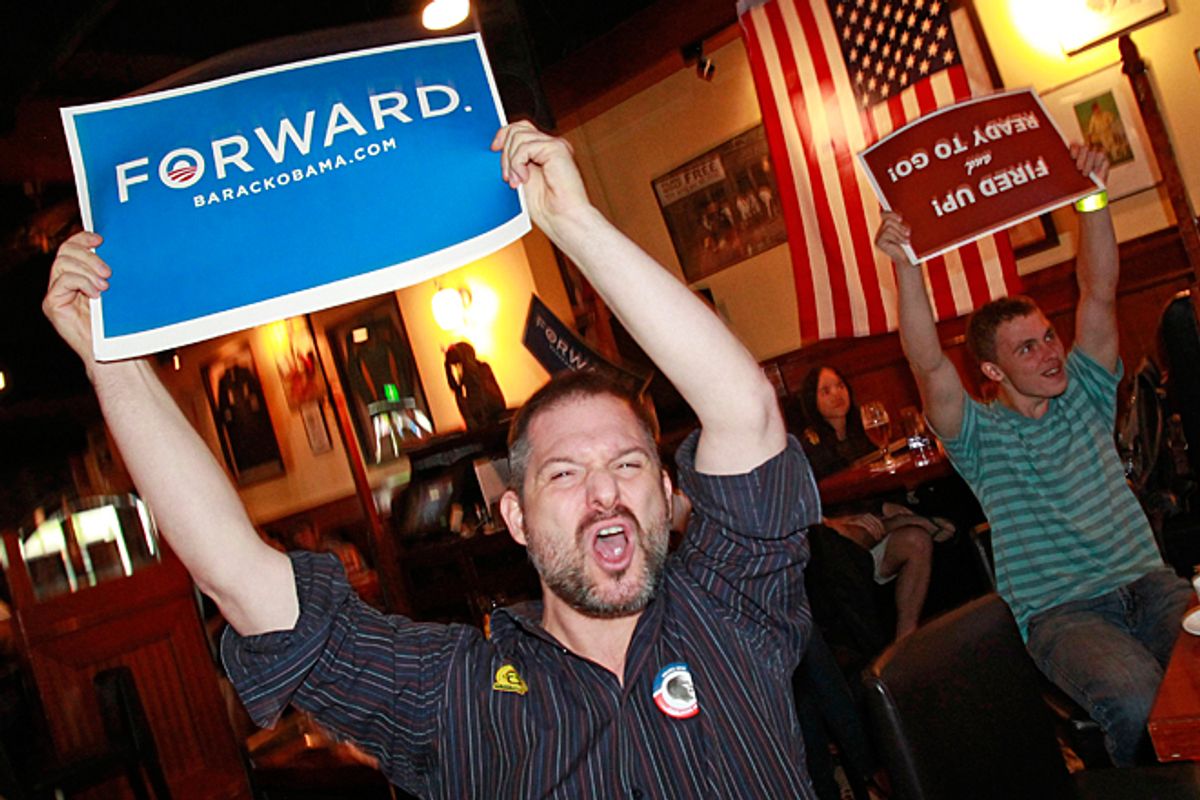 Yes, you're right, we're gloating. You caught us. Maybe you've noticed it from our unstoppably gleeful tweets about what Christopher Hayes calls "overdosing on Schadenfreude" or the way we might have let it slip that, as Lindy West admits, "I am just 99 percent completely fucking delighted by every single weepy right-wing temper tantrum." Perhaps you find it unseemly – you, the defeated but dignified Republican, or you, the Democrat who thinks this kind of whoop-whooping is beneath our kind. Bur bear with us. You see, some of us recently had a hurricane blow through our lives.

This election was nail-biting enough when it was just about Obama vs. Romney. But then it became more than just a big fat "Oh, phew!" regarding having a president who won't actively try to sabotage our reproductive rights or marriage equality or the middle class. It became about not getting a guy who was pretty gung-ho on cutting federal funding for disaster relief. It became about simply not being able to bear another blow.

I cannot overstate this enough – a whole lot of New York and New Jersey is one big raw, exposed nerve right now. Go open up a map and take a look at the path of Hurricane Sandy. Now just go ahead and assume that every person within 200 miles of that is completely traumatized right now. Not all of them are, of course. Some of them are eating foie gras in expensive restaurants and planning vacations. Plenty are resentful that Romney didn't win. Obama just barely carried storm-ravaged Staten Island, for instance. But there is a high possibility that whatever their economic status or political leanings, those people have just had a couple of days so surreal, so upsetting, that they cannot yet even put words to the experience. So they're going to have feelings, and those feelings are going to be pretty far out there.

We are still in the throes of an unprecedented catastrophe here. Scores of families displaced. Entire neighborhoods destroyed. Even those who didn't lose their homes or power have been affected in a variety of ways. Our public transportation is now defined by something called "recovery maps." We are dealing with gas rationing, reduced waste collection and suspended recycling. A number of schools have no heat. They just got the power back in the Gowanus Houses in Brooklyn on Friday, a week and a half after the storm. Businesses have been affected. Work schedules have been interrupted. There are reports of looting. The lives of our friends and loved ones have been thrown into varying degrees of chaos. And within it all, so many people -- so many good, good people -- are giving up their time and energy to help until they're ready to drop in exhaustion. The collective stress level, brought on by the grief and the shock and the work – it's astonishing.

On Tuesday, we voted. Some of us had to do it under the power of generators and flashlights. Some of us did it at polling places that were crowded with residents of wiped-out polling districts. We went to our voting booths bracing for -- guess what? An imminent, brutal nor'easter. And then we stayed up till 2:00 in the morning watching in awe as the results unfolded.

So hey, if we now feel entitled to get a few jollies over "livid billionaires" and Karl Rove's yummy, sweet tears, the rest of you might have to back the hell off. If our response to the Tea Party calling the election a "disaster of unimaginable magnitude" is a sharp "Bitch, please," try to get where we're coming from. Because if I had to wake up Wednesday to President Romney, I was going to lose it like it has never been lost.

Earlier this week, I had a reader send me a chastising email because I'd said that when the election was called at 11:15 P.M., it filled "exhausted voters on the still-battered East Coast with the naïve hope that they could go to bed early." A once-in-every-four-years event is more important than a good night's sleep, the man scolded. I noted that the business address in his email was California, and I laughed and laughed and laughed. Yeah, presidents get elected every four years, but Hurricane Sandy was a never-before kind of thing. So we were already a might tired here, sir.

We have barely begun digging out of damage that will tally in the high billions.  To give you a sense of what it's been like here, the front page of the New York Daily News on Thursday, after the latest "weather incident," was just "THIS SUCKS." And so the victories of Barack Obama and so many men and women who are trying to move our country forward have a lot of us here pretty jazzed, maybe to a degree you find obnoxious. But know that our experience right now is unbelievably bittersweet. This good news comes in the midst of the hardest, cruelest thing to happen in a lot of our lifetimes. We're trying to get through this with as much grace and goodwill as we can muster, but it's not easy taking the high road when it's strewn with downed trees and power lines. So let us be happy for a moment, maybe even a little too happy. Let us have this, when we've lost so much more.