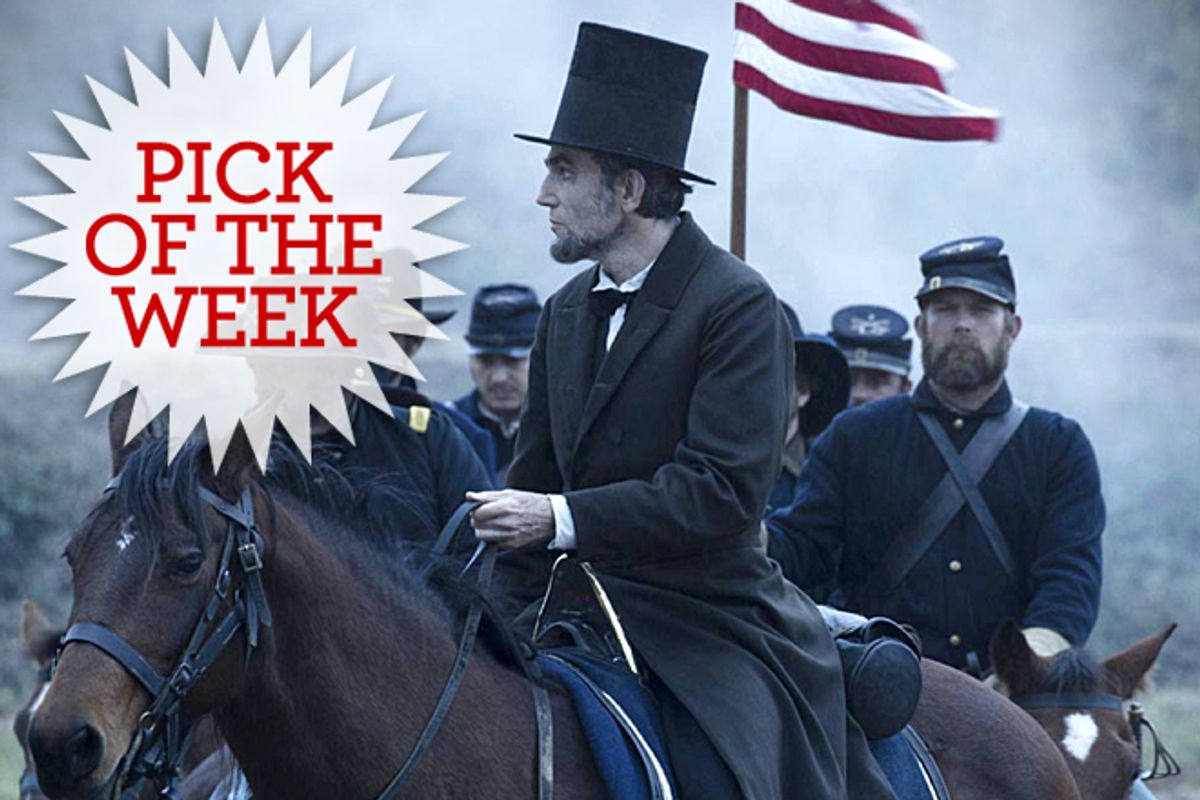 Steven Spielberg’s “Lincoln” has a lot to live up to, even when you get past the fact that its subject is the greatest of all American presidents and one of history’s most mythologized characters. Its cast members have won at least five Oscars, with two apiece belonging to the odd but compelling couple at the center of the story, Daniel Day-Lewis as Abraham Lincoln and Sally Field as Mary Todd Lincoln, his tormented and demanding co-strategist and life partner. The two best-known previous films about our 16th president were made by D.W. Griffith and John Ford, who represent exactly the kind of classic American cinema against which Spielberg measures himself. (In fairness, neither Griffith's early talkie "Abraham Lincoln," starring Walter Huston, nor Ford's "Young Mr. Lincoln," with Henry Fonda in the title role, is much watched these days.)

Then there’s the question of Spielberg’s up-and-down directing career, which includes three Oscars of his own, several of the biggest hits in movie history and a marked propensity for sentimental overreach when he tries to tackle serious drama. (I remain somewhat willing to defend both “Saving Private Ryan” and “Schindler’s List,” for example, but both are great in parts rather than great as a whole.) Expectations for “Lincoln” could not possibly have been higher, and I’m inclined to think that Spielberg’s biggest challenge in making it lay in overcoming his own worst impulses. It could so easily have turned into sweeping oratory, montages of Civil War dead and a slow-motion assassination scene in Ford’s Theatre, all set to a keening John Williams violin score. (“Lincoln” does in fact have a score by Williams, but it’s effective and rarely obtrusive.)

There are a couple of brief but memorable Civil War scenes near the beginning and end of “Lincoln,” and a few snippets from his speeches, notably his second inaugural address a few weeks before his death. But we don’t see Lincoln deliver the Gettysburg Address, and the event you’ll be dreading as the story moves toward April of 1865 is handled with grace and delicacy. As I noted in an essay last weekend, John Wilkes Booth is never seen and never mentioned, which can only have been a deliberate choice. (I, for one, am grateful.) As for Spielberg, he has outdone Griffith and Ford and then some, crafting a thrilling, tragic and gripping moral tapestry of 19th-century American life, an experience that is at once emotional, visceral and intellectual. In a mesmerizing collaboration with a great actor (Day-Lewis) and a visionary writer (Pulitzer-winning playwright Tony Kushner), Spielberg has captured Lincoln as a shrewd political leader and a man of his time rather than a brooding philosopher-poet on a pedestal (although there’s some of that too).

I wanted to take a moment to honor Spielberg’s accomplishment here because it would be easy to overlook it. You don’t think about the way “Lincoln” is directed while you’re watching it, mostly because you’re working through the bristly, challenging language of Kushner’s screenplay, or caught up in Day-Lewis’ portrayal of a dry, angular prairie lawyer, prone to long-winded and semi-relevant anecdotes, who finds himself in the White House at a crucial turning point in the nation’s history. You’ll certainly notice Janusz Kaminski’s gorgeous, subdued camerawork, along with Rick Carter’s production design, which captures the muddy streets and rough-hewn, horizontal landscape of 1860s Washington in documentary detail.

Kushner’s screenplay is based on the final two chapters of Doris Kearns Goodwin’s historical bestseller “Team of Rivals: The Political Genius of Abraham Lincoln,” and focuses entirely on the last few months of Lincoln’s life, and his struggle to shove the 13th Amendment – which would outlaw slavery forever – through a divided Congress before the end of the Civil War. The reasons for this were simultaneously practical, political and philosophical: Lincoln knew that the Emancipation Proclamation he had issued two years earlier might be struck down by the courts after the war’s end, and wanted to make the constitutional change before the defeated states of the Confederacy could have a chance to block it. Furthermore, after a sweeping Republican victory in the election of 1864 the lame-duck Congress included many dispirited and defeated Democrats, who might be persuaded (by fair means or foul) to support the amendment at no political cost.

Presumably Spielberg and Kushner are not psychic, and could not have known that their movie would be released right after the reelection of a controversial president who faced implacable hostility from his political opponents. But they certainly understood that the situation Lincoln faced in the winter of 1864-65 has all kinds of contemporary significance, and has been studied by historians and political scientists ever since. Although sometimes presented in schoolbooks as a man dominated by high-flown principles, Lincoln was a savvy politician who had been willing to coexist with slavery (although he always detested it) for the sake of preserving the Union. When that failed and war came despite his efforts to prevent it, he determined that there was no going back to the status quo ante, and was prepared to engage in all kinds of dirty, dubious and underhanded politics in the name of seizing the historical moment.

Spielberg’s greatest strengths as a director lie in structure and balance – the way he handles main plot and subplot, central characters and supporting characters. Add in Kushner’s remarkable ability to create distinctive characters in a few seconds of dialogue and you get one of the richest and deepest ensemble casts in recent Hollywood history. Certainly Day-Lewis as Lincoln dominates his scenes, with his stooped raven’s frame, the smile that lets you know he’s thinking a step ahead of you, the flattened and slightly deadpan Midwestern cadence of his speech. (Obviously no films or audio of Lincoln exist – he was a few decades early for that -- but Day-Lewis has clearly studied the many descriptions of his physical and vocal manner.)

But there are so many other vivid characters and scenes in “Lincoln” I cannot possibly list them all. There are major supporting roles, like Tommy Lee Jones as Pennsylvania congressman Thaddeus Stevens, a radical abolitionist who had long viewed Lincoln as a sellout, or David Strathairn as the stern but loyal William Seward, Lincoln’s secretary of state (who played the role of in-house enforcer that a White House chief of staff might play today). There are memorable bit parts, including James Spader as a New York scoundrel hired by Seward to seduce wavering Democratic congressmen, or Lee Pace as the pro-slavery Democrat and famous orator Fernando Wood, who gave fulminating House speeches accusing Lincoln of setting himself up as an American Caesar. And then there’s Sally Field.

We don’t have time to unpack all the theories and arguments about why Field – who won two best-actress Oscars in the ‘80s, the only two times she’s been nominated – seemed to drop off the Hollywood radar screen after she turned 50, even as Helen Mirren and Meryl Streep sailed from one triumph to the next. She was more of a pixie-ingénue type than they ever were, I suppose, and I’m aware of the general opinion that a little Sally Field goes a long way. Whatever moment of inspiration caused Spielberg to cast her as Mary Todd Lincoln, it was sheer genius, because this is a role that demands bigness.

By all accounts a feared and respected woman who was not much liked or loved (arguably not by her husband and children either), Mary was seen by many contemporaries as the power behind the throne, if not something more than that -- the fiery engine that drove Lincoln forward. While some biographers have understood her as mentally ill (and that remains a possibility), Kushner presents her, in just two major scenes, as a woman of tremendous agony and pathos, sublimating all her ambition and desire into her husband and her sons. In our own age, Mary Lincoln could have been a politician herself, or almost anything else she could imagine; in Field’s ferocious portrayal, she is a feminist hero many decades before the advent of feminism, who made her own indelible contribution to American history.

Steven Spielberg has often – and I say this with affection, believe it or not – represented both the best and worst impulses of American film in the same moment. “War Horse,” his Oscar-bait historical spectacle from last year, almost became a great movie if you stuck through it, but swamped itself in storybook pseudo-John Ford artificiality. He sometimes doesn’t get full credit, on the other hand, for his harder-edged, less overtly “Spielbergian” films, from “Munich” to “Minority Report” to “A.I.” to “Empire of the Sun.”

“Lincoln” looks like a big historical drama on an epic scale, but it’s one of those movies too, a tightly focused and morally ambiguous study of character, principle and politics. It’s frankly nostalgic about both cinema and history, recalling an era when Hollywood constructed mainstream entertainments that were also meant to edify and inspire. But it does not flee from the tragedy or the contradictions of its subject, and this time around Spielberg has collaborators who rise to that ambition and make the film seem both an enduring classic and a contemporary lesson in the ways history keeps on detonating. Is “Lincoln” an inspiring story of American greatness? Yeah, absolutely. But if you say that, also say that it’s a cautionary tale of American mendacity and hypocrisy, the unfinished story of a cancerous evil that poisoned and divided America from its birth and does so still.